Parke Hill Davis (July 15, 1871 – June 5, 1934)[1][2] was an American football player, coach, and historian who retroactively named national championship teams in American college football from the 1869 through the 1932 seasons. He also named co-national champions at the conclusion of the 1933 season.[3] Davis' selections are included in the NCAA's official football record books, as championship teams chosen on the basis of research.[4] Critics have faulted his work for having a heavy Eastern bias, with little regard for the South and the West Coast.[5]

He displayed an admirable range of talents. In 1896 alone, Coach Davis organized Lafayette's Law Club;[14] he appeared in a leading role in a stage production of The Rivals at the Easton, Pennsylvania Opera House;[15] he read Longfellow poetry at the Freshman Initiation gala;[16] and he led Lafayette to its first national football championship, an honor he would, himself, bestow upon his team some 37 years after the fact.

The biggest win of the 1896 season came in Philadelphia against Pennsylvania on October 24.[17][18][19] A standout for Lafayette was a newcomer named Fielding "Hurry Up" Yost.

Yost began playing football at West Virginia University in 1894 at the age of 23.[20] A 6-foot, 200-pounder, Yost was a star tackle at WVU into the 1896 season. But after his team lost three times to Lafayette in home games played on three different fields over the course of three days,[19][21] Yost became a remarkable personification of "if you can't beat 'em, join 'em." He transferred in mid-season to join what would be Coach Davis' national championship team.

True to his nickname, just a week after playing against Davis in West Virginia, "Hurry Up" was playing for Davis in Lafayette's historic 6–4 win over the Quakers.[19]

The fortuitous timing of Yost's appearance on the Lafayette roster did not go unnoticed by Penn officials. They called it "the Yost affair." The Philadelphia Ledger quoted Yost as saying that he came to Lafayette only to play football. The fact that Yost appeared in a Lafayette uniform only once... in the Penn game[22]… and that he returned to West Virginia within two weeks of the contest... did not help appearances.

Yost assured all concerned that he would return to Lafayette for at least three years of study.[23] But 1897 found "Hurry Up" no longer a student or a player, but a coach at Ohio Wesleyan. In 1901, he was hired as head coach at the University of Michigan, beginning a storied 25-year, Hall of Fame career.

After concluding his own six-year career as a football coach, Davis became a "prominent attorney"[24] in Easton, Pennsylvania, where Lafayette is located. He lived there the rest of his life.

In the October 1900 meeting of the Lafayette Democratic Club, Davis was the "orator of the evening," after the group unanimously endorsed the national ticket of William Jennings Bryan.[25]

In 1901, the former coach, "favorably and widely known through his past connection with football at Lafayette," easily won election as District Attorney of Northampton County, Pennsylvania,[26] of which Easton is the county seat.

He became such a part of Easton and the college that he was proclaimed a "loyal son of Lafayette" after giving an "enthusiastic" speech in 1901 urging on the football team before its game with Princeton, his own alma mater.[27]

The "ex-coach and loyal supporter of athletics of Lafayette"[28] served as an umpire in football games[29] and as starter at the college's track meets.[30]

Davis wrote an early history of American football in 1911, tracing the sport's origins to ancient times:[31]

...abundant evidence may be marshalled to prove that this is the oldest outdoor game in existence. In the 22nd chapter of Isaiah is found the verse, "He will turn and toss thee like a ball." This allusion, slight as it may be, is sufficient unto the antiquary to indicate that some sort of game with a ball existed as early as 750 years before the Christian era, the epoch customarily assigned to the Book of Isaiah.

An acknowledged expert on the formative years of the sport in the 19th century, Davis described the period between 1869 and 1875 as the Pioneer Period; the years 1876–93 he called the period of the American Intercollegiate Football Association; and the years 1894–1933 he dubbed the Period of Rules Committees and Conferences.[3]

He helped select the 1913 College Football All-America Team while serving as Princeton's representative on the American Intercollegiate Football Rules Committee.[32]

He served on the Rules Committee from 1909 to 1915, playing a key role in shaping the evolution of the game. Among the innovations with which he is credited are the division of the game into quarters, numbering of players, abolition of inter-locked interference and the creation of end zones.[33]

Even after leaving the Rules Committee, Davis promoted his ideas for improving the sport, which included making it illegal to advance a recovered fumble:

This feature of football is uncouth, unfair and a relic of a long bygone era... The proper disposition of this fluke play is to change the rules so that the ball shall be put down for scrimmage at the point where a fumble is recovered by the side recovering the fumble and no run allowed. If the fumble is recovered behind an opponent's goal line the ball shall be put in play at the point where it was fumbled.[34]

Davis was a friend and admirer of Walter Camp, "Father of American Football."[35] In a 1926 authorized biography of Camp, author Harford Powel, Jr. turned to Davis for historical perspective, including accounts of Camp's "heavy disappointments (which) should be mentioned, for fear it might be thought that Camp was one of those players who do not know the feeling of failure."[36]

He reviewed the sport's first half-century in "Fifty Years of Intercollegiate Football," which appeared in the 1926 edition of Spalding's Official Football Guide. Davis' description of football's earliest years paint an image of a sport very different from the game as it became known in the 20th century:[37]

The tactics of the times made the play essentially a kicking game. The backs kicked punts, drop kicks, and place kicks... Not only was the ball kicked as at present, but it was kicked, and cleverly kicked, while bouncing upon the ground.

The game was opened, as now, by a kick-off. The player of 1880 might, if he chose, drive the ball far down the field. Or, technically kicking the ball by merely touching it with his toe, he might pick it up and run with it. Players when tackled invariably endeavored to pass the ball back to another member of their side for a further advance, a method of play so highly developed that it was not infrequent to see a ball passed as many as five times during a single play.

In addition to his work on the Guide, Davis authored articles on football for the Encyclopædia Britannica and compiled a glossary of football terms.[33]

"Set all the records straight"

"Perhaps a bit irritated by the flood of experts on the scene, the most noted historian football has ever known, Parke H. Davis, decided to set all the records straight in the 1933 edition of Spalding's Football Guide," reported Dan Jenkins in the September 11, 1967 edition of Sports Illustrated. "Davis went all the way back to the first inflated pig bladder to pick the national champions for every season. He used no special formula. He simply looked at the schedules and the results and chose his teams."[7]

Davis' list was titled, "Outstanding Nationwide and Sectional Teams," compiled for the seasons from 1869 onward.[38]: 233–35  In all, he selected 94 teams over 61 seasons as "Outstanding Nationwide and Sectional Teams." For 21 of these teams (at 12 schools), he was the only major selector to choose them. Their schools use 17 of Davis' singular selections to claim national titles. Davis died months after his selection of the outstanding 1933 teams for the 1934 Guide.

For the 1896 season, Davis selected his own team and his alma mater to share the title. Lafayette and Princeton had fought to a 0–0 stalemate early in the season.[39]

In addition to naming each year's champion, Davis added statistics from the 1873 through the 1933 seasons to his annual Guide. These included the longest scoring plays from rushing, returns, passing plays and interceptions.[40] The 1934 edition was Davis' last to include these compilations, as he died soon after its completion. Through the 1937 edition, the records were included with the notation, "Compilations of the late Parke H. Davis."[38]: 223–32 [40]

Davis' health may have been a concern in the spring of 1934.

Princeton announced that it was inviting the sporting world to honor its famous alum on "Parke Davis Day," which was set for the following October 13. As The Lafayette reported:

The purpose of this event will be to commemorate the long and faithful services which Mr. Davis has given to football. Mr. Davis, a graduate of Princeton, came to Lafayette in 1895. He raised the Maroon from a position of obscurity to a level with the football giants... Lafayette owes much to Parke Davis and should contribute something to this event which is being held in his honor.[42]

But within weeks of the announcement... and months before "Parke Davis Day" was to be held... the honoree was dead.

Rather than attending the planned celebration in New Jersey, "(c)ollege associates, former football stars and members of the bench and bar were among the friends," who arrived in Easton as mourners for June 8 funeral services held at Davis' home. They included Congressman Abram Andrew and legendary Wisconsin coach Phil King, both former teammates at Princeton, and fellow football historian and Princeton grad William H. Edwards.[2][43] 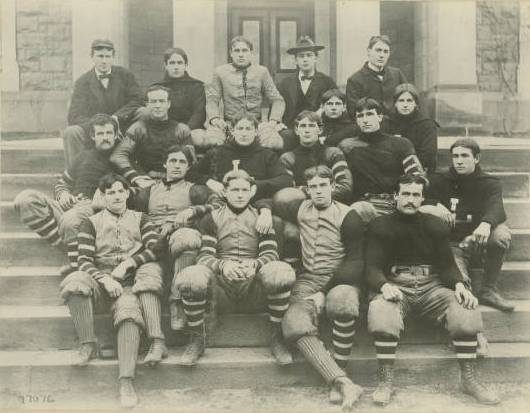 Davis' All-America players: George B. Walbridge (left, 3rd Team 1897 All-America back, chosen by Walter Camp). Walbridge was right half-back and captain of Lafayette's 1896 team. He went on to graduate from Cornell in 1900. In 1916, he co-founded Walbridge Aldinger, which would become one of the largest construction companies in the United States.[44] In 2008, the company changed its name to simply "Walbridge."[45] Charles R. Rinehart (right, 1896 All-America guard[46] and 2nd team 1897 All-America guard, chosen by Walter Camp).[47] Charles "Babe" or "Riny" Rinehart was a right guard on the '96 squad. At 6'3" and 210 pounds he was the biggest man on the team.[48] He would captain and also play quarterback for the '97 team.[49] Rinehart was elected to the College Football Hall of Fame in 1964. Lafayette College, David Bishop Skillman Library, Department of Special Collections & College Archives

Lafayette on defense in its 6–4 upset victory over Pennsylvania on October 24, 1896 at Franklin Field in Philadelphia. "Football – The American Intercollegiate Game," written by Parke H. Davis in 1911 (no longer in copyright)