A Petri net, also known as a place/transition (PT) net, is one of several mathematical modeling languages for the description of distributed systems. It is a class of discrete event dynamic system. A Petri net is a directed bipartite graph that has two types of elements, places and transitions. Place elements are depicted as white circles and transition elements are depicted as rectangles. A place can contain any number of tokens, depicted as black circles. A transition is enabled if all places connected to it as inputs contain at least one token. Some sources[1] state that Petri nets were invented in August 1939 by Carl Adam Petri—at the age of 13—for the purpose of describing chemical processes.

Like industry standards such as UML activity diagrams, Business Process Model and Notation, and event-driven process chains, Petri nets offer a graphical notation for stepwise processes that include choice, iteration, and concurrent execution. Unlike these standards, Petri nets have an exact mathematical definition of their execution semantics, with a well-developed mathematical theory for process analysis[citation needed].

The German computer scientist Carl Adam Petri, for whom such structures are named, analyzed Petri nets extensively in his 1962 dissertation Kommunikation mit Automaten.

Graphically, places in a Petri net may contain a discrete number of marks called tokens. Any distribution of tokens over the places will represent a configuration of the net called a marking. In an abstract sense relating to a Petri net diagram, a transition of a Petri net may fire if it is enabled, i.e. there are sufficient tokens in all of its input places; when the transition fires, it consumes the required input tokens, and creates tokens in its output places. A firing is atomic, i.e. a single non-interruptible step.

Unless an execution policy (e.g. a strict ordering of transitions, describing precedence) is defined, the execution of Petri nets is nondeterministic: when multiple transitions are enabled at the same time, they will fire in any order.

Since firing is nondeterministic, and multiple tokens may be present anywhere in the net (even in the same place), Petri nets are well suited for modeling the concurrent behavior of distributed systems.

Definition 1. A net is a tuple

A Petri net with an enabled transition.

The Petri net that follows after the transition fires (Initial Petri net in the figure above).

Definition 3. An elementary net is a net of the form EN = (N, C) where

Definition 4. A Petri net is a net of the form PN = (N, M, W), which extends the elementary net so that

In the diagram of a Petri net (see top figure right), places are conventionally depicted with circles, transitions with long narrow rectangles and arcs as one-way arrows that show connections of places to transitions or transitions to places. If the diagram were of an elementary net, then those places in a configuration would be conventionally depicted as circles, where each circle encompasses a single dot called a token. In the given diagram of a Petri net (see right), the place circles may encompass more than one token to show the number of times a place appears in a configuration. The configuration of tokens distributed over an entire Petri net diagram is called a marking.

The following formal definition is loosely based on (Peterson 1981). Many alternative definitions exist.

A Petri net graph (called Petri net by some, but see below) is a 3-tuple

The flow relation is the set of arcs:

. In many textbooks, arcs can only have multiplicity 1. These texts often define Petri nets using F instead of W. When using this convention, a Petri net graph is a bipartite multigraph

with node partitions S and T.

The preset of a transition t is the set of its input places:

; its postset is the set of its output places:

. Definitions of pre- and postsets of places are analogous.

A marking of a Petri net (graph) is a multiset of its places, i.e., a mapping

. We say the marking assigns to each place a number of tokens.

A Petri net (called marked Petri net by some, see above) is a 4-tuple

We are generally interested in what may happen when transitions may continually fire in arbitrary order.

; we say that it is reachable from M if

is the reflexive transitive closure of

For a (marked) Petri net

, we are interested in the firings that can be performed starting with the initial marking

. Its set of reachable markings is the set

The reachability graph of N is the transition relation

restricted to its reachable markings

. It is the state space of the net.

is a sequence of transitions

. The set of firing sequences is denoted as

Variations on the definition

A common variation is to disallow arc multiplicities and replace the bag of arcs W with a simple set, called the flow relation,

. This does not limit expressive power as both can represent each other.

Another common variation, e.g. in Desel and Juhás (2001),[4] is to allow capacities to be defined on places. This is discussed under extensions below.

The markings of a Petri net

can be regarded as vectors of non-negative integers of length

Its transition relation can be described as a pair of

can be used to describe the reachable markings in terms of matrix multiplication, as follows. For any sequence of transitions w, write

for the vector that maps every transition to its number of occurrences in w. Then, we have

It must be required that w is a firing sequence; allowing arbitrary sequences of transitions will generally produce a larger set.

One thing that makes Petri nets interesting is that they provide a balance between modeling power and analyzability: many things one would like to know about concurrent systems can be automatically determined for Petri nets, although some of those things are very expensive to determine in the general case. Several subclasses of Petri nets have been studied that can still model interesting classes of concurrent systems, while these problems become easier.

An overview of such decision problems, with decidability and complexity results for Petri nets and some subclasses, can be found in Esparza and Nielsen (1995).[6]

The reachability problem for Petri nets is to decide, given a Petri net N and a marking M, whether

It is a matter of walking the reachability-graph defined above, until either the requested-marking is reached or it can no longer be found. This is harder than it may seem at first: the reachability graph is generally infinite, and it isn't easy to determine when it is safe to stop.

While reachability seems to be a good tool to find erroneous states, for practical problems the constructed graph usually has far too many states to calculate. To alleviate this problem, linear temporal logic is usually used in conjunction with the tableau method to prove that such states cannot be reached. Linear temporal logic uses the semi-decision technique to find if indeed a state can be reached, by finding a set of necessary conditions for the state to be reached then proving that those conditions cannot be satisfied.

A Petri net in which transition

is dead, while for all

Petri nets can be described as having different degrees of liveness

-live if and only if all of its transitions are

-live, where a transition is

Note that these are increasingly stringent requirements:

These definitions are in accordance with Murata's overview,[12] which additionally uses

-live as a term for dead. 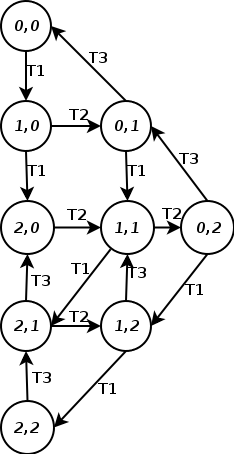 The reachability graph of N2.

A place in a Petri net is called k-bound if it does not contain more than k tokens in all reachable markings, including the initial marking; it is said to be safe if it is 1-bounded; it is bounded if it is k-bounded for some k.

A (marked) Petri net is called k-bounded, safe, or bounded when all of its places are. A Petri net (graph) is called (structurally) bounded if it is bounded for every possible initial marking.

A Petri net is bounded if and only if its reachability graph is finite.

Boundedness is decidable by looking at covering, by constructing the Karp–Miller Tree.

It can be useful to explicitly impose a bound on places in a given net. This can be used to model limited system resources.

Some definitions of Petri nets explicitly allow this as a syntactic feature.[13] Formally, Petri nets with place capacities can be defined as tuples

is a Petri net,

an assignment of capacities to (some or all) places, and the transition relation is the usual one restricted to the markings in which each place with a capacity has at most that many tokens.

For example, if in the net N, both places are assigned capacity 2, we obtain a Petri net with place capacities, say N2; its reachability graph is displayed on the right.

A two-bounded Petri net, obtained by extending N with "counter-places".

Alternatively, places can be made bounded by extending the net. To be exact, a place can be made k-bounded by adding a "counter-place" with flow opposite to that of the place, and adding tokens to make the total in both places k.

There are many extensions to Petri nets. Some of them are completely backwards-compatible (e.g. coloured Petri nets) with the original Petri net, some add properties that cannot be modelled in the original Petri net formalism (e.g. timed Petri nets). Although backwards-compatible models do not extend the computational power of Petri nets, they may have more succinct representations and may be more convenient for modeling.[16] Extensions that cannot be transformed into Petri nets are sometimes very powerful, but usually lack the full range of mathematical tools available to analyse ordinary Petri nets.

The term high-level Petri net is used for many Petri net formalisms that extend the basic P/T net formalism; this includes coloured Petri nets, hierarchical Petri nets such as Nets within Nets, and all other extensions sketched in this section. The term is also used specifically for the type of coloured nets supported by CPN Tools.

There are many more extensions to Petri nets, however, it is important to keep in mind, that as the complexity of the net increases in terms of extended properties, the harder it is to use standard tools to evaluate certain properties of the net. For this reason, it is a good idea to use the most simple net type possible for a given modelling task. Workflow nets (WF-nets) are a subclass of Petri nets intending to model the workflow of process activities.[24] The WF-net transitions are assigned to tasks or activities, and places are assigned to the pre/post conditions. The WF-nets have additional structural and operational requirements, mainly the addition of a single input (source) place with no previous transitions, and output place (sink) with no following transitions. Accordingly, start and termination markings can be defined that represent the process status.

WF-nets have the soundness property,[24] indicating that a process with a start marking of k tokens in its source place, can reach the termination state marking with k tokens in its sink place (defined as k-sound WF-net). Additionally, all the transitions in the process could fire (i.e., for each transition there is a reachable state in which the transition is enabled). A general sound (G-sound) WF-net is defined as being k-sound for every k > 0.[25]

A directed path in the Petri net is defined as the sequence of nodes (places and transitions) linked by the directed arcs. An elementary path includes every node in the sequence only once.

The design structure matrix (DSM) can model process relations, and be utilized for process planning. The DSM-nets are realization of DSM-based plans into workflow processes by Petri nets, and are equivalent to WRI-WF-nets. The DSM-net construction process ensures the soundness property of the resulting net.

Other models of concurrency

An approach to relating some of these models of concurrency is proposed in the chapter by Winskel and Nielsen.[28]