This article needs additional citations for verification. Please help improve this article by adding citations to reliable sources. Unsourced material may be challenged and removed.Find sources: "Piero Gobetti" – news · newspapers · books · scholar · JSTOR (July 2010) (Learn how and when to remove this template message)
This article may be expanded with text translated from the corresponding article in Italian. (October 2018) Click [show] for important translation instructions. Machine translation like DeepL or Google Translate is a useful starting point for translations, but translators must revise errors as necessary and confirm that the translation is accurate, rather than simply copy-pasting machine-translated text into the English Wikipedia. Do not translate text that appears unreliable or low-quality. If possible, verify the text with references provided in the foreign-language article. You must provide copyright attribution in the edit summary accompanying your translation by providing an interlanguage link to the source of your translation. A model attribution edit summary Content in this edit is translated from the existing Italian Wikipedia article at [[:it:]]; see its history for attribution. You should also add the template ((Translated page)) to the talk page. For more guidance, see Wikipedia:Translation. 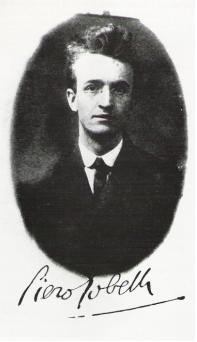 Piero Gobetti (Italian: [ˈpjɛːro ɡoˈbetti]; June 19, 1901, Turin – February 15, 1926, Neuilly-sur-Seine) was an Italian journalist, intellectual and radical liberal and anti-fascist. He was an exceptionally active campaigner and critic in the crisis years in Italy after the First World War and into the early years of Fascist rule.

A student of law at the University of Turin, he set up his own review Energie Nove ('New Energies') in 1918. There he promoted the cause of radical cultural and political renewal, aligning himself with the many critics of liberal parliamentary politics. Drawing upon the idealist philosophy of Benedetto Croce, Gobetti identified cultural change with a spiritual transformation that would unite public and private life. He also attached himself to causes such as educational reform and votes for women led by the independent deputy, Gaetano Salvemini.

In 1920, Gobetti was influenced by Antonio Gramsci, fellow ex-student and Communist editor of the L'Ordine Nuovo ('New Order'). Gramsci was the leading intellectual during the proletarian unrest in Turin in 1919–1920 which led to the factory occupations in September 1920. Inspired by the workers' movement and Gramsci's argument that they constituted a new revolutionary subject, Gobetti gave up editing Energie Nove in order to rethink his commitments.

In 1922, he began publishing a new review, La Rivoluzione Liberale ("Liberal Revolution"). Here he expounded a distinctive version of liberalism, conceived as a philosophy of liberation rather than a party doctrine. Deeply moved by the Russian Revolution, which he understood as a liberal event, Gobetti conceived the working class as the leading subject of a liberal revolution. In seeking to take over the factories and govern themselves, he argued, the workers expressed a desire for autonomy and collective freedom that could renew Italy. Liberals, Gobetti argued, should understand the term 'liberal' as adaptable to different classes and institutional arrangements other than the bourgeoisie and parliamentary democracy.

Resistance leader Ada Gobetti was his wife and contributed to La Rivoluzione Liberale as well as other magazines.

Gobetti was also highly attentive to the dangers of Benito Mussolini's Fascist Party, which entered government in October, 1922. Whilst conservative liberals hoped to make temporary use of Mussolini's popularity in order to restore parliament, Gobetti recognised the tyrannical orientation of fascism. He claimed fascism represented the 'autobiography of the nation', an accretion of all the ills of Italian society. In particular, fascism continued a political tradition of compromise, absorbing political opponents rather than allowing conflict to express itself openly. Liberalism, he argued, was anti-fascist insofar as, on his account, it recognised that liberty was achieved through struggle and conflict.

In late 1924, Gobetti also began to edit a journal of European literary culture entitled Il Baretti. He used the journal to put into practice his idea of liberal anti-fascism and his conviction that the Italian people could learn to reject the insular nature of fascist culture by means of an education in European culture.

For his rigid opposition to Fascism, Gobetti's review was closed down and he himself was assaulted by fascist thugs. He was beaten up in 1925 and escaped to Paris early the next year. He died there in February, 1926. He is buried in the Pere Lachaise cemetery.

Following his death and despite his relatively few writings, Gobetti became a symbol of liberal anti-fascism, inspiring intellectuals such as Carlo Levi and Norberto Bobbio.

In the Florestano Vancini's film The Assassination of Matteotti (1973), Gobetti is played by Stefano Oppedisano.