The politics of Glasgow, Scotland's largest city by population, are expressed in the deliberations and decisions of Glasgow City Council, in elections to the council, the Scottish Parliament and the UK Parliament. 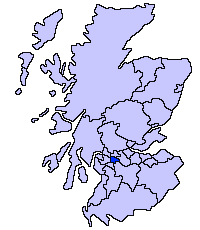 As one of the 32 unitary local government areas of Scotland, Glasgow City Council has a defined structure of governance, generally under the Local Government etc. (Scotland) Act 1994, controlling matters of local administration such as housing, planning, local transport, parks and local economic development and regeneration. For such purposes the city is currently (as of 2020, since 2017) divided into 23 wards, each returning either three or four councillors via single transferable vote, a proportional representation system. From 1995 until 2007, single members were elected from 79 small wards.[1]

Among other appointments, one of the councillors becomes its leader, and one other takes on the ceremonial and ambassadorial role of Lord Provost of Glasgow, an office which dates from the 1450s. The city council sits at the Glasgow City Chambers on George Square, built in the 1880s and one of the city landmarks.[2]

A Glasgow Town Council operated under the historic county of Lanarkshire, with Glasgow serving as the capital of its 'lower ward'; it was originally based at the Tollbooth, Glasgow Cross.[3][4] In 1893, by now one of the most important cities in the British Empire[5] after decades of continuous growth, wealth creation through trade and industrialisation fuelled by the extraction of natural resources in the surrounding area,[5] it was then made a 'county of a city' (alongside Aberdeen, Dundee and Edinburgh) and effectively controlled its own affairs under Glasgow Corporation, a body that oversaw further immigration and growth as incomers sought work in its strong industrial sectors including locomotives, textiles and particularly shipbuilding on the River Clyde.[6] A municipal public transport system was developed and an abundance of civic amenities were established, but the city's urban fabric struggled to cope with the number of people living in it, and slum housing conditions developed in several areas.[6] During World War I, the council was unique in the United Kingdom in appointing an official war artist, Frederick Farrell.[7]

This situation continued through much of the 20th century, during which time Glasgow's boundaries were extended several times, involving the incorporation of nearby burghs such as Govan, Maryhill, Partick, Pollokshaws, Pollokshields, Shettleston and Springburn,[8] and its population exceeded 1 million,[9] only to fall back below that due to the subsequent construction of 'new towns' outwith its boundaries to replace sub-standard housing (much of it dating from the previous century)[8] and an economic downturn which prompted thousands to emigrate overseas to countries such as Canada, the United States, New Zealand, South Africa and Australia. In this era, the corporation oversaw the building of many peripheral housing estates and tower blocks as another solution to the city's accommodation crisis,[8] as well as the installation of the M8 motorway through the heart of its urban area, part of an even more elaborate network which was never fully completed. Glasgow Corporation Transport was under the control of the Glasgow Corporation, and ran the local buses and Glasgow Trams, until it was superseded by the Greater Glasgow Passenger Transport Executive on 1 June 1973.

The enactment of the Local Government (Scotland) Act 1973 led to the historic counties being abolished, and Glasgow became a second-tier district within the Strathclyde Region,[10] and also serving as the capital of Strathclyde which contained more than half of Scotland's population.[11][12] During the period of two tier local government (Local Government (Scotland) Act 1973) from 1975–96, Glasgow District Council was responsible for refuse collection, museums, libraries and housing, while Strathclyde Regional Council had responsibilities for policing, fire service, water, education, social work and transport.

The City of Glasgow became a unitary council area in 1996 under the Local Government etc. (Scotland) Act 1994, taking on the powers and responsibilities previously divided between councils of the Glasgow City district and the Strathclyde region.[13][14] Glasgow City Council serves a population of roughly 600,000 with the boundaries of the post-1975 district largely retained,[15] but with many of its affluent suburbs that had been within Strathclyde - whose residents used Glasgow services regularly - outwith the city auspices for the collection of council tax.

History of leaders and administrations

Nicola Sturgeon, a Glasgow List MSP from 1999 to 2007, and the constituency MSP for Glasgow Govan / Glasgow Southside since then, has performed the role of First Minister of Scotland since November 2014.

The Parliament of the United Kingdom (located at the Palace of Westminster in London) legislates on matters such as taxation, foreign policy, defence, employment and trade. For elections to the House of Commons of this parliament, the city area is currently (as of 2020, since 2005) divided among seven United Kingdom Parliamentary constituencies, with each returning one Member of Parliament (MP) by the first-past-the-post system of election.

Glasgow has returned at least two MPs to Westminster since the creation of the first Glasgow constituency in 1832,[5] despite the suppression of the 'Radical War' a decade or so earlier. The town, by then already the largest in Scotland with 200,000 residents,[8] was split off from the Clyde Burghs constituency, which itself had been created from a merger of four Parliament of Scotland seats, one of which was Glasgow, established in 1630. The initial Westminster seat was divided into seven constituencies in the Redistribution of Seats Act 1885. Some Glasgow women played a prominent role in the struggles for Women's suffrage in Scotland.

The rise in the labour movement in the early-twentieth century[6] and the social composition of industrial Glasgow at the time led to its politics being dubbed the Red Clydeside. Notable protests included rent strikes over sub-standard housing led by the Glasgow Women's Housing Association, and a post-World War I city centre rally led by the trade unions to which the UK Government responded with armed intervention by soldiers and tanks, known as the Battle of George Square.[16] 18,000 Glasgow men had died in the conflict,[17] from a total of 200,000 who enlisted.[9] In the 1930s, hundreds of left-wing Glaswegians volunteered to join the International Brigades to assist the Republican faction in the Spanish Civil War, with 65 being killed in the conflict.[18]