Climbing is the activity of using one's hands, feet, or any other part of the body to ascend a steep topographical object. It is done for locomotion, recreation and competition, and within trades that rely on ascension; such as emergency rescue and military operations. It is done indoors and out, on natural and man-made structures. (Full article...)

The 730 m (2,400 ft) icefall (center) in the Roosevelt Glacier, Mount Baker, Washington, U.S.
An icefall is a portion of certain glaciers characterized by relatively rapid flow and chaotic crevassed surface, caused in part by gravity. The term icefall is formed by analogy with the word waterfall, which is a similar phenomenon of the liquid phase but at a more spectacular speed. When ice movement of a glacier is faster than elsewhere, because the glacier bed steepens or narrows, and the flow cannot be accommodated by plastic deformation, the ice fractures, forming crevasses. Where two fractures meet, seracs (or ice towers) can be formed. When the movement of the ice slows down, the crevasses can coalesce, resulting in the surface of the glacier becoming smoother. (Full article...)

Rock climbing is a sport in which participants climb up, across, or down natural rock formations or artificial rock walls. The goal is to reach the summit of a formation or the endpoint of a usually pre-defined route without falling. Rock climbing is a physically and mentally demanding sport, one that often tests a climber's strength, endurance, agility and balance along with mental control. Knowledge of proper climbing techniques and the use of specialized climbing equipment is crucial for the safe completion of routes.

Because of the wide range and variety of rock formations around the world, rock climbing has been separated into several different styles and sub-disciplines, such as scrambling, bouldering, sport climbing, and trad (traditional) climbing another activity involving the scaling of hills and similar formations, differentiated by the rock climber's sustained use of hands to support their body weight as well as to provide balance.

Rock climbing competitions have the objectives of either completing the route in the least amount of attempts or attaining the farthest point on an increasingly difficult route. Indoor rock climbing is typically split into three disciplines. These disciplines are bouldering, lead climbing, and top roping. (Full article...) 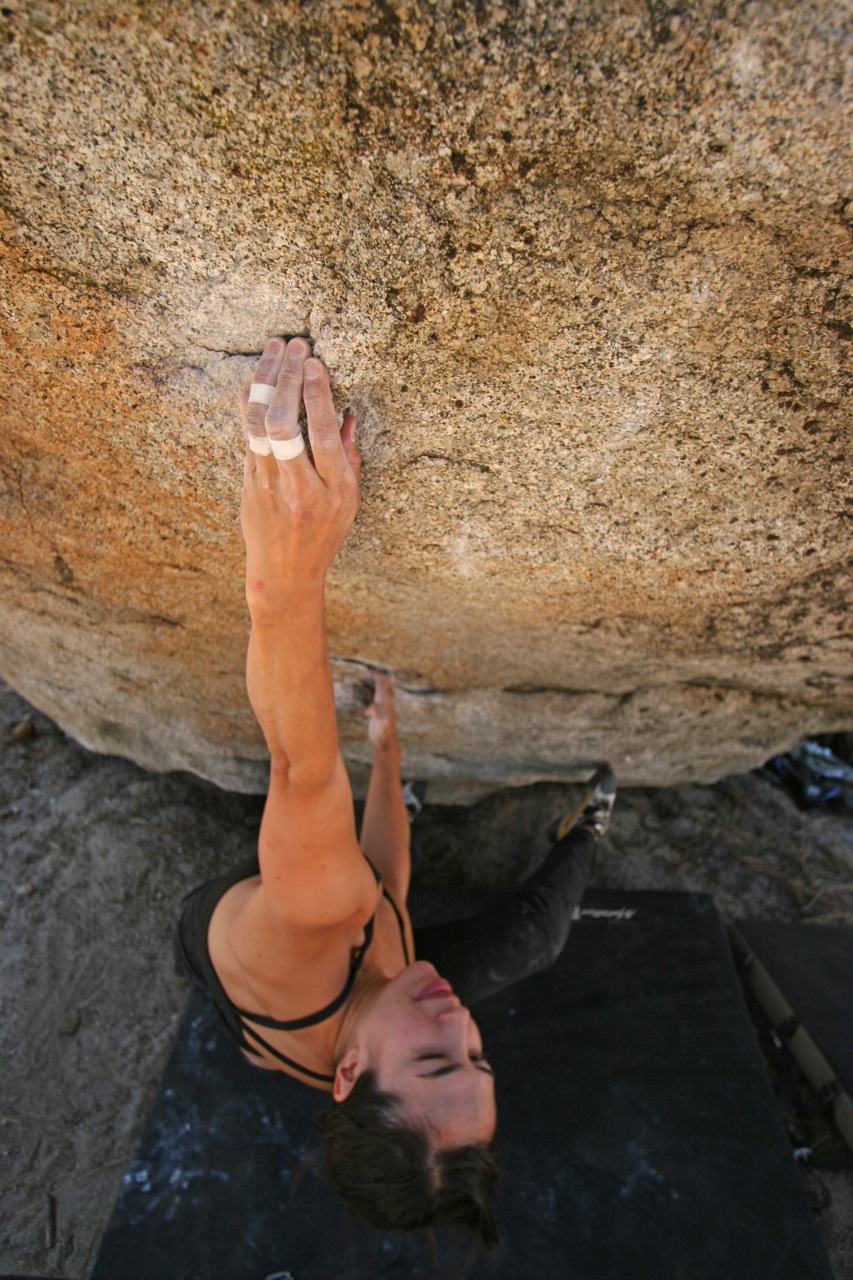 Bouldering is a form of rock climbing that is performed on small rock formations or artificial rock walls, known as boulders, without the use of ropes or harnesses.

Speed climbing is a climbing discipline in which speed is the ultimate goal. Speed Climbing is done on rocks, walls and poles Ice climbing is the activity of ascending inclined ice formations. Usually, ice climbing refers to roped and protected climbing of features such as icefalls, frozen waterfalls, and cliffs and rock slabs covered with ice refrozen from flows of water.

Megos at the 2018 World Championships

Alexander Megos (born 12 August 1993) is a German rock climber. He was the first climber to on-sight (climb on the first try without prior practice or advice) a route graded 9a (5.14d). He has completed multiple routes and boulder problems that are notoriously difficult, including three 9b+ (5.15c) routes (Perfecto Mundo, Bibliographie, and King Capella), two 9b (5.15b) routes (First Round, First Minute, and Fight Club), and some boulders with a confirmed 8C (V15) rating. (Full article...)

A climbing area is a small geographical region with a concentration of opportunities for climbing. The term is most commonly used of rock climbing areas, but there are also ice climbing areas that have the right combination of steepness and water to result in climbable ice during the winter. (Full article...)

A man climbing a palmyra palm

Tree climbing is a recreational or functional activity consisting of ascending and moving around in the crown of trees.

A rope, helmet, and harness can be used to increase the safety of the climber. Other equipment can also be used depending on the experience and skill of the tree climber. Some tree climbers take special hammocks called "Treeboats" and Portaledges with them into the tree canopies where they can enjoy a picnic or nap, or spend the night.

Some tree-climbers employ a mixture of techniques and gear derived from rock climbing and caving. These techniques are also used to climb trees for other purposes: tree care (arborists), animal rescue, research, and activism. (Full article...) Canyoning (canyoneering in the United States, kloofing in South Africa) is a type of mountaineering that involves travelling in canyons using a variety of techniques that may include other outdoor activities such as walking, scrambling, climbing, jumping, abseiling (rappelling), and swimming.

Canyoning is frequently done in remote and rugged settings and often requires navigational, route-finding, and other wilderness travel skills. Caving in a muddy section of Black Chasm Cave in California

Caving – also known as spelunking in the United States and Canada and potholing in the United Kingdom and Ireland – is the recreational pastime of exploring wild cave systems (as distinguished from show caves). In contrast, speleology is the scientific study of caves and the cave environment.

The challenges involved in caving vary according to the cave being visited; in addition to the total absence of light beyond the entrance, negotiating pitches, squeezes, and water hazards can be difficult. Cave diving is a distinct, and more hazardous, sub-speciality undertaken by a small minority of technically proficient cavers. In an area of overlap between recreational pursuit and scientific study, the most devoted and serious-minded cavers become accomplished at the surveying and mapping of caves and the formal publication of their efforts. These are usually published freely and publicly, especially in the UK and other European countries, although in the US, these are generally private.

Sometimes categorized as an "extreme sport", it is not commonly considered as such by longtime enthusiasts, who may dislike the term for its connotation of disregard for safety. (Full article...)