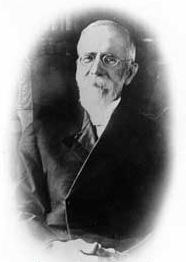 Presbyterian College was founded in 1880 by the William Plumer Jacobs. He had served as the pastor of First Presbyterian Church in Clinton since 1864 and founded the Thornwell Orphanage. Originally called Clinton College, its first class (including three women) graduated in 1883. In establishing PC, his "tree of knowledge", Jacobs' goal was to educate young people for lives of service to church and society, and thereby be, in his words, "epistles to Christ's honor and glory".[6]

By the time of Jacobs' death in 1917, the college had grown considerably in size and resources, and had six major buildings. Neville Hall, PC's most recognized structure, was constructed in 1907. The tenure of president Davison McDowell Douglas (1911-1926) saw the tripling of the size of the faculty and student body, the construction of four new buildings, and growth in the college's assets from $150,000 to over $1 million.[7] After weathering the storms of the Great Depression and Second World War, Presbyterian has continued expansion on many fronts through the second half of the twentieth century. It became fully coeducational in 1965 (and in so doing dropped its previous motto, "Where Men are Made"). In 1969, it began admitting African-American students.[8]

Presbyterian College is accredited by the Commission on Colleges of the Southern Association of Colleges and Schools (SACS).[9] The School of the Liberal Arts confers B.A. and B.S. degrees in 30 courses of study and 9 pre-professional programs including Pre-Law, Pre-Med, Pre-Theology, and Pre-Pharmacy. PC also offers a dual-degree program in Engineering (with Clemson University, Auburn University, Georgia Tech, the University of South Carolina, and Vanderbilt University) and minor fields in an additional 13 disciplines such as Africana Studies, Media Studies, and Women's and Gender Studies.[10][11] The liberal arts program has small average class sizes (13-15 students). Beginning in 1991, six Presbyterian College faculty members have been declared Carnegie/CASE South Carolina Professor of the Year Award winners.[9] PC is one of two South Carolina colleges or universities with a Confucius Institute, which fosters economic connections and cultural interaction between the US and China. Through the institute, Presbyterian participates in a partnership and exchange program with Guizhou University, located in Guiyang, China. The Confucius Institute sponsors cultural events on PC's campus and offers elementary, intermediate, and advanced courses in Mandarin.[12][13][14]

The School of Pharmacy confers Doctorate of Pharmacy degrees (PharmD) and is oriented toward serving the healthcare needs of underdeveloped and economically depressed areas of South Carolina and the greater US. A 54,000 square-foot facility, its doors opened in the fall of 2010 with an inaugural class of 80 students. The School of Pharmacy was fully accredited by the Accreditation Council for Pharmacy Education (ACPE) in July 2014.[15] Despite its youth, it has accrued multiple awards including a Biomedical/Biobehavioral Research Administration Development (BRAD) grant from the National Institute of Health, and a Generation Rx Champion Award from the South Carolina Pharmacy Association (SCPhA) for its efforts at raising awareness of prescription drug abuse.[16][17]

Since 1915 all aspects of life at Presbyterian have been regulated by a student-run honor code.[21] The signing of the honor code is a central fixture of each academic year's opening convocation ceremony and is a requirement for all incoming students, faculty, and coaches. The honor code binds one to "abstain from all deceit," to "neither give nor receive unacknowledged aid in [one's] academic work," to "respect the persons and property of the community" and to "not condone discourteous or dishonest treatment of these by [one's] peers."[22] Suspected violations of the honor code go before the College's honor council, composed of students and faculty, which has the power to sanction, suspend, or dismiss those found guilty.[23] Until 2007, PC's fierce rivalry with Newberry College was expressed in the annual Bronze Derby football game, named for the series's trophy, which made its debut in 1947 after a basketball game between the two colleges. After the game, which PC won 51–47, a scuffle broke out between supporters of both colleges and a derby hat was snatched from the head of a PC student. The hat was eventually returned, cast in bronze, and transformed into a symbol of the rivalry. The last installment of the Bronze Derby game was played in November 2006 at Bailey Memorial Stadium in Clinton, where PC defeated Newberry 10-0. The Blue Hose lead the all-time Bronze Derby series, but since Presbyterian's transition to Division I in 2007 the annual clash has been postponed indefinitely. 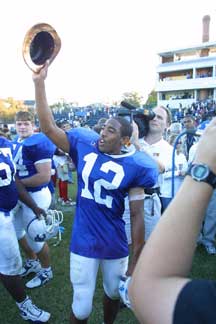 Notable alumni of the college include: