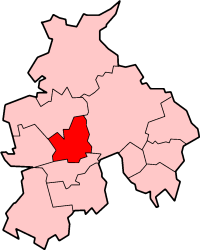 Coat of Arms of the City Council

Since the first election to the council in 1973 political control of the council has been held by the following parties:[1]

Conservative councillor Damien Moore (Greyfriars) resigned from the council in March 2018 (he was elected Member of Parliament for Southport in 2017).[14] The seat (term ending 2019 due to boundary changes[15] trigger a full election) was filled in a double election for Greyfriars on 3 May.[16]

Council elections in Lancashire
Culture and infrastructure of the City of Preston
Categories
Categories: