The President's Cup is the championship trophy of the league. The QMJHL champion then goes on to compete in the Memorial Cup against the OHL and WHL champions, and the CHL host team. The QMJHL had traditionally adopted a rapid and offensive style of hockey. Former QMJHL players hold many of the Canadian Hockey League's career and single season offensive records.

The Quebec Major Junior Hockey League was founded in 1969, through the merger of best teams from the existing Quebec Junior Hockey League and the Metropolitan Montreal Junior Hockey League, declaring themselves a "major junior" league. Of the original eleven QMJHL teams, eight came from the QJHL, two from the MMJHL, and the Cornwall Royals, from Cornwall, Ontario, near the Quebec border, who transferred from the Central Junior A Hockey League. The Rosemont National and Laval Saints transferred from the MMJHL. The eight teams from the QJHL were the Drummondville Rangers, Quebec Remparts, Saint-Jérôme Alouettes, Shawinigan Bruins, Sherbrooke Castors, Sorel Éperviers, Trois-Rivières Ducs and the Verdun Maple Leafs.

Most of the teams were within a few hours' drive of Montreal. From the first season in 1969–70, only Shawinigan remains in the same city with an uninterrupted history, although the team's name has changed to the Cataractes.

In 1972 the QMJHL had been in operation for three years, and wanted a team in the province's largest city. It threatened a lawsuit to force the Montreal Junior Canadiens of the Ontario Hockey Association into the Quebec-based league. Over the summer of 1972, the OHA granted the Junior Habs a "one-year suspension" of operations, while team ownership transferred the team and players into the QMJHL, renaming themselves the Montreal Bleu Blanc Rouge in the process. The OHA then reactivated the suspended franchise for the 1973–74 season in Kingston, Ontario, under new ownership and with new players, calling the team the Kingston Canadians.

QMJHL teams have won the Memorial Cup twelve times since 1969, with the Shawinigan Cataractes, Saint John Sea Dogs, the Granby Prédateurs, the Hull Olympiques, Halifax Mooseheads, Rouyn-Noranda Huskies, Rimouski Océanic, and the Acadie-Bathurst Titan each winning once, the Quebec Remparts winning twice (once in their first edition 1969–1985, and once in their second edition 1997–present) and the Cornwall Royals winning three times.

Starting in 1994, the QMJHL began to expand further east, outside of Quebec. The "Q" filled the void in Atlantic Canada after the exodus of American Hockey League franchises, when the AHL had a strong presence in the 1980s and 1990s; all of the Maritime Division cities save for Bathurst, New Brunswick are former homes of AHL franchises. To date, Fredericton, New Brunswick is the lone former AHL market that has not established a QMJHL franchise.

This is a list of Canadian Hockey League career and single season records accomplished by QMJHL players.[3] 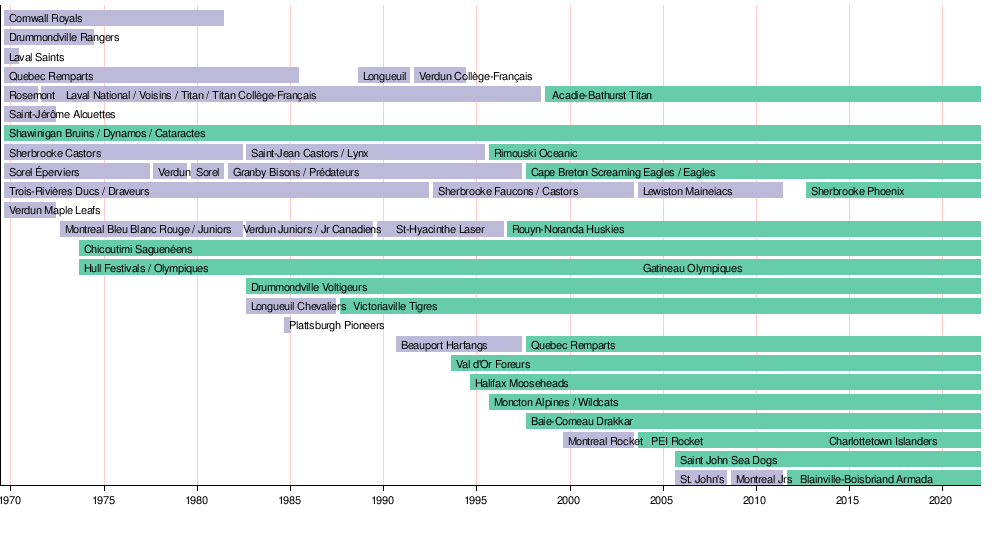 The Memorial Cup has been captured fourteen times by QMJHL teams since the league's founding in 1969:

This is a list of QMJHL trophies.[5] The trophy's first season being awarded is shown in brackets.