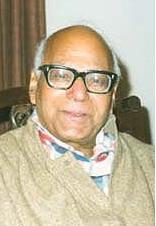 Ram Swarup was born in 1920 to a banker father in Sonipat, now a part of the state of Haryana in the Garg gotra of the merchant Agrawal caste. He graduated with a degree in Economics from Delhi University in 1941. He started the Changer's Club in 1944, members of which included Lakshmi Chand Jain, Raj Krishna, Girilal Jain and Sita Ram Goel. In 1948-49, he worked for Mahatma Gandhi's disciple Mira Behn (Madeleine Slade).[2]

Swarup wrote a book on the Communist party that was published under an assumed name. In 1949, he founded the Society for the Defence of Freedom in Asia. The Society published books, reviewed in the West, that criticised both the Presidium of the Supreme Soviet-mouthpiece Izvestia as well as Pravda, another mouthpiece for that same foreign power's Communist Party.[3] The Society for the Defence of Freedom in Asia ceased operations in 1955. His early book Gandhism and Communism from around this time had some influence among American policymakers and members of Congress.[4] Swarup also wrote for mainstream Indian weeklies and dailies, like the Telegraph, The Times of India, Indian Express, Observer of Business and Politics, Hindustan Times and Hinduism Today.

Ram Swarup upheld the polytheistic interpretation of the Vedas by rejecting the concept of one God,[7] and states that, "only some form of polytheism alone can do justice to this variety and richness."[8]

Swarup was influenced by Sri Aurobindo, whom he held to be the greatest exponent of the Vedic vision in our times.[9]

Ram Swarup was "most responsible for reviving and re-popularizing" the Hindu 'critique' of Christian missionary practices in the 1980s, according to Chad Bauman. He insisted that monotheistic religions like Christianity "nurtured among their adherents a lack of respect for other religions".[10] In the 1980s, he and Goel were involved in a "vigorous debate" with the Christian Ashram movement represented by Bede Griffiths.[11] Swarup has been named one of the most important thought leaders of the Hindu revivalist movement.[1]

Christopher Gérard (editor of Antaios, Society for Polytheistic Studies) said: "Ram Swarup was the perfect link between Hindu Renaissance and renascent Paganism in the West and elsewhere."[14]

Swarup has also advocated a "Pagan renaissance" in Europe, saying

Europe became sick because it tore apart from its own heritage, it had to deny its very roots. If Europe is to be healed spiritually, it must recover its spiritual past—at least, it should not hold it in such dishonor...

He argued that the European Pagans "should compile a directory of Pagan temples destroyed, Pagan groves and sacred spots desecrated. European Pagans should also revive some of these sites as their places of pilgrimage."[15]

Writings as a contributor

Writings in other languages