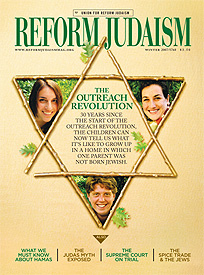 From time to time its articles have won awards or been listed in RAMBI, the index of articles on Jewish Studies: