The Regional Municipality of Halton, or Halton Region, is a regional municipality in Ontario, Canada, located in the Golden Horseshoe of Southern Ontario. It comprises the city of Burlington and the towns of Oakville, Milton, and Halton Hills. Policing in the Region is provided by the Halton Regional Police Service. The regional council's headquarters are located in Oakville. Burlington and Oakville are largely urban and suburban, while the towns of Milton and Halton Hills are more rural.

Halton experienced a growth rate of 17.1% between 2001 and 2006, and 14.2% between 2006 and 2011, giving it one of the highest growth rates in the country. Despite the unprecedented growth in residential development, agriculture and protected lands along the Niagara Escarpment are still the predominant land uses in the region. Halton has been ranked by Maclean's national crime ranking report as being the "safest place to live" in the GTA and one of the top five in Canada.[3]

Until the 2000 municipal elections, the chairperson of the regional council had been appointed by the Ontario government. From that date, it has been an elective position. Joyce Savoline was the last appointed chairperson, and was elected and reelected until her retirement from the position in 2006. The current regional chairperson is Gary Carr.

The current membership of the council is as follows:

Halton Region provides the following services to its communities:[7]

x = suppressed for reasons of confidentiality

Halton's agricultural sector is supported by regional infrastructure such as the Port of Hamilton which is a growing agri-food hub for the import of agricultural inputs and the export of local crops.

The 2018 budget document contains additional specifics and updates as to the Region's finances. In that year, gross revenues were $1.2 billion while operating expenses totaled $821.5 million for a net revenue of $350.2 million, an increase of 1.2% over the previous year. The increase was mostly due to increases in grants and taxes. The Region included over 13,200 companies and employed over 229,000 persons. The credit rating of AAA was confirmed by S&P Global Ratings and Moody's Investors Service.[17] 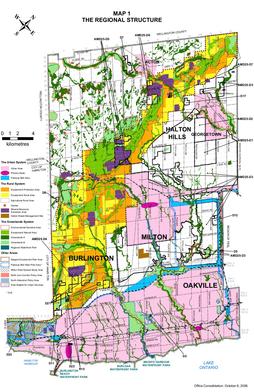 Identification of urban and rural features of the Region.

While the urban areas of Burlington, Oakville and Milton are experiencing rapid growth, there is still a significant proportion of the Region that is still rural, most of which is protected as part of the provincial Greenbelt or as part of the Niagara Escarpment Plan.

Halton is somewhat unusual, in that it has three distinct climate zones within its relatively small area,[18] which are as follows: