Problems that make use of the relations to rates of change
This article is written like a manual or guidebook. Please help rewrite this article from a descriptive, neutral point of view, and remove advice or instruction. (October 2015) (Learn how and when to remove this template message)

In differential calculus, related rates problems involve finding a rate at which a quantity changes by relating that quantity to other quantities whose rates of change are known. The rate of change is usually with respect to time. Because science and engineering often relate quantities to each other, the methods of related rates have broad applications in these fields. Differentiation with respect to time or one of the other variables requires application of the chain rule,[1] since most problems involve several variables.

Fundamentally, if a function

is defined such that

, then the derivative of the function

can be taken with respect to another variable. We assume

Written in Leibniz notation, this is:

Thus, if it is known how

changes with respect to

, then we can determine how

changes with respect to

and vice versa. We can extend this application of the chain rule with the sum, difference, product and quotient rules of calculus, etc.

The most common way to approach related rates problems is the following:[2] 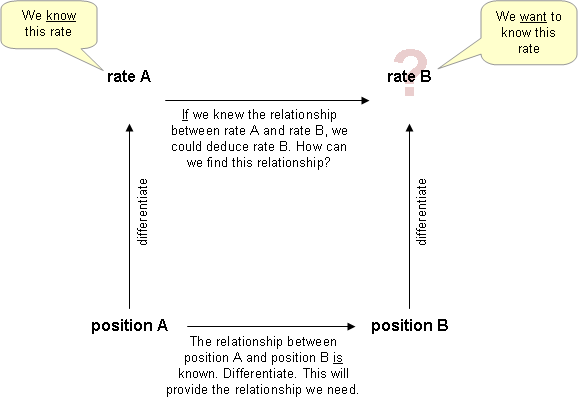 Step 2: From the Pythagorean theorem, the equation

describes the relationship between x, y and h, for a right triangle. Differentiating both sides of this equation with respect to time, t, yields

Step 3: When solved for the wanted rate of change, dy/dt, gives us

Plugging in 8 for the equation:

It is generally assumed that negative values represent the downward direction. In doing such, the top of the ladder is sliding down the wall at a rate of 9/4 meters per second.

Because one physical quantity often depends on another, which, in turn depends on others, such as time, related-rates methods have broad applications in Physics. This section presents an example of related rates kinematics and electromagnetic induction.

Big idea: use chain rule to compute rate of change of distance between two vehicles.

Express c in terms of x and y via the Pythagorean theorem:

Consequently, the two vehicles are getting closer together at a rate of 28 mi/hr.

is the negative rate of change of magnetic flux

through a conducting loop.

If for example, the loop is rotating at a constant angular velocity ω, so that θ = ωt, then