The Grateful Dead were an American rock band known for their lengthy, partially improvised performances, as well as for a loyal fan base who often followed the band for several shows or entire tours. They disbanded in 1995, following the death of de facto bandleader Jerry Garcia.[1] Since then remaining members have reunited for a number of concert tours and one-off performances, often in very different configurations. The following is a list of instances where former Grateful Dead members have reunited.

Other than Jerry Garcia, the Grateful Dead's main performing members were Bob Weir, Phil Lesh, Bill Kreutzmann and Mickey Hart. Garcia, Weir, Lesh and Kreutzmann were in the band from its inception in 1965 until its demise in 1995, while Hart had a tenure of 25 non-consecutive years. The other then-current or former members of the Grateful Dead who were living at the time that the band broke up were Tom Constanten, Donna Jean Godchaux, and Vince Welnick. Additionally, Bruce Hornsby was in the lineup for many Dead concerts and was considered an unofficial member of the band. Already deceased in 1995 were Ron "Pigpen" McKernan, Keith Godchaux, and Brent Mydland. Single shows and other collaborations 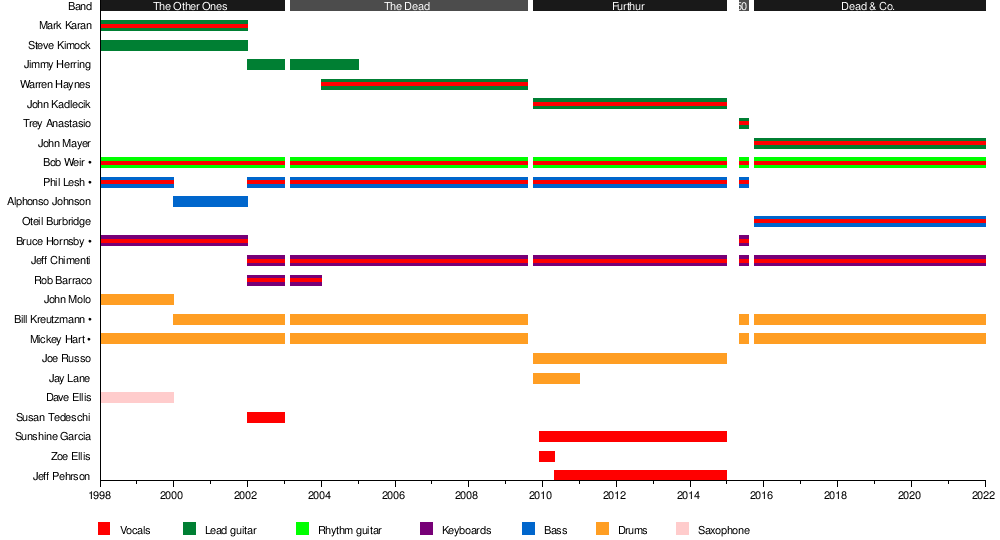