The Riddler, a supervillain in DC Comics and an adversary of the superhero Batman, has been adapted into numerous forms of media, including feature films, television series, and video games. The character has been portrayed in live-action by Frank Gorshin and John Astin in the 1960s television series Batman, Jim Carrey in the 1995 film Batman Forever, Cory Michael Smith in the 2014 Fox series Gotham, and Paul Dano in the 2022 film The Batman. Actors who have voiced the Riddler include John Glover in the DC animated universe, Robert Englund in The Batman, and Wally Wingert in the Batman: Arkham video games. 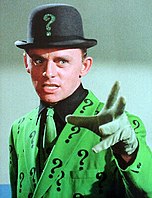 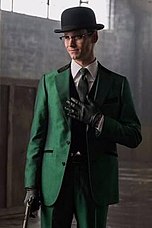 The Riddler, portrayed by Frank Gorshin in the 1960s Batman TV series (left) and Cory Michael Smith on the TV series Gotham (right). The Riddler as he appeared in Batman: The Animated Series (left) and The New Batman Adventures (right)

The Riddler as he appears in Challenge of the Super Friends

The Riddler as he appears in The Batman

Jim Carrey as Edward Nygma / The Riddler in Batman Forever (1995)

Paul Dano as Edward Nashton / The Riddler in The Batman (2022) Concept artwork of the Riddler for Batman: Arkham City

Edward Nashton / Enigma / The Riddler appears in all four primary installments of the Batman: Arkham video game series, voiced by Wally Wingert. This version had an abusive father who accused him of cheating in a riddle solving contest before beating him. This resulted in Nashton becoming obsessed with riddles and proving his intellectual superiority. He would later go on to become a police consultant and the apparent head of the GCPD's Cybercrime unit, during which he operated as Enigma before eventually becoming the Riddler. The Riddler in Batman: The Enemy Within