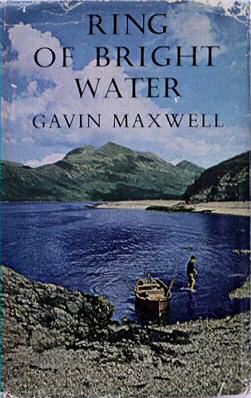 Ring of Bright Water is a book by Gavin Maxwell about his life in a remote house in coastal Scotland where he kept several wild otters as pets.[1][2] First published in 1960, it became a best seller and is considered a literary masterpiece,[3] eventually selling over two million copies.[4] A fictionalised film of the same name was made from it[4] and released in 1969.[3]

The book describes how Maxwell brought a smooth-coated otter back from Iraq and raised it at "Camusfeàrna" (the name he used for his house at Sandaig near Glenelg), on the west coast of Scotland. He took the otter, called Mijbil, to the London Zoological Society, where it was decided that this was a previously unknown subspecies, and it was named after him: Lutrogale perspicillata maxwelli (or colloquially, "Maxwell's otter").[5]

The book's title was taken from a poem by Kathleen Raine,[4] who claimed in her autobiography that Maxwell had been the love of her life. Her relationship with Maxwell deteriorated after 1956 when she indirectly caused the death of Mijbil.[6]

A reviewer in the Sunday Herald described the book as having "inspired a generation of naturalists" and referred to it as a "classic account of man and wildlife". The review calls Ring of Bright Water "one of the most popular wildlife books ever written", as over two million copies had been sold worldwide by 1999.[7]

Two sequels were published: The Rocks Remain (1963) and Raven Seek Thy Brother (1968), which were less idyllic than the first, chronicling accidents and misfortunes involving both the otters and Maxwell's life.[8] All three books were republished as Ring of Bright Water: A Trilogy in 2011 by Nonpareil Books.[9] The trilogy does not include the full text of the latter two volumes, but removes the tangential travel sections which take place outside Scotland.[8]