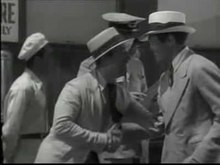 Robinson Crusoe of Clipper Island (1936) is a Republic movie serial starring Ray Mala. It was the fourth of the 66 serials produced by Republic and the last (of four) to be released in 1936. Robinson Crusoe of Clipper Island is notable for being the first Republic serial to contain another common aspect of serials—a Re-Cap Chapter, similar to a clipshow in modern television, whereby the events of the previous chapters are repeated via clips (in order to save money). Contrary to popular belief, this was not the invention of the concept, which had been routinely used in serial production before the release of this serial. The serial was edited into the film Robinson Crusoe of Mystery Island, which was released in 1966.

Agent Mala, an intelligence operative, investigates sabotage on the remote Clipper Island. A gang of spies causes the eruption of a volcano, for which Mala is blamed. He convinces the native Princess Melani of his innocence and helps her ward off a takeover by rival high priest and spy collaborator Porotu and discover the identity of spy ringleader H.K.

The special effects were created by John T. Coyle and the Lydecker brothers.

Robinson Crusoe of Clipper Island is the only 14-chapter sound serial.[1][3]

Note: Many of the resolutions of these cliffhangers are "cheats": When the event is repeated at the start of a new chapter, there is a crucial and sometimes obvious difference from what was shown at the end of the preceding chapter.