Sad Sack is an American comic strip and comic book character created by Sgt. George Baker during World War II. Set in the United States Army, Sad Sack depicted an otherwise unnamed, lowly private experiencing some of the absurdities and humiliations of military life. The title was a euphemistic shortening of the military slang "sad sack of shit", common during World War II. The phrase has come to mean "an inept person" or "inept soldier".[1]

Originally drawn in pantomime by Baker, The Sad Sack debuted June 1942 as a comic strip in the first issue of Yank, the Army Weekly. It proved popular, and a hardcover collection of Baker's wartime Sad Sack strips was published by Simon & Schuster, Inc. in 1944, with a follow-up, The New Sad Sack (1946). The original book was concurrently published as an Armed Services edition mass market paperback, in that edition's standard squarebound, horizontal, 5 5/8" × 4" format, by Editions for the Armed Services, Inc., a non-profit organization of The Council on Books in Wartime; it was #719 in the series of Armed Service editions.

After the war ended, The Sad Sack ran in newspaper syndication in the United States from May 5, 1946 until 1958.[2] Baker then sold the rights to Harvey Comics, which produced a large number of commercial spin-offs.[3]

The army camp where most of the action took place was usually named Camp Calamity,[7] but was sometimes called Camp Browbeat.[8]

The Harvey Comics and newspaper strip were aimed at younger readers than Baker's wartime originals, and the style of the strip changed dramatically. In the newspaper strip, the pantomime style was abandoned in favor of a more conventional comic-story format.[citation needed]

In the mid-1950s, Harvey Comics and Baker brought in Paul McCarthy to draw the Sad Sack titles, followed by Fred Rhoads, Jack O'Brien, and Joe Dennett. Others who periodically drew for the titles include Warren Kremer and Ken Selig. Baker retained editorial control and continued to illustrate the covers of Sad Sack comics until his death in 1975.[citation needed]

La Prensa, a Mexican publisher, released the Spanish language editions of the Sad Sack comics under the title Tristán Tristón. In addition to Sad Sack strips, other strips within each Tristán Tristón issue included Tristána Tristóna (Sad Sack's cousin, Sadie Sack) and Capulín which was about a boy who had overly large feet. The latter two strips were often only one page and used as filler. Other filler strips included Firulais and Chiquilladas. 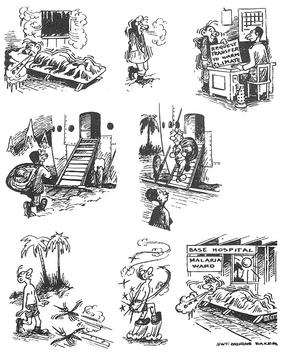 In late 2000, Alan Harvey (eldest son of Harvey Comics founder Alfred Harvey) sued Steve Geppi[9] (owner of Diamond Comics Distribution and many other properties), charging that Geppi had plundered Harvey's warehouses in the mid-1980s, specifically of original art from Harvey's Sad Sack comic books.[10] Geppi countersued, claiming that he had legal title to the original art[11] thanks to a 1984 agreement he had made with Steve Harvey—at the time President of Harvey Publications, Inc., as well as President of Sad Sack, Inc., a wholly owned subsidiary of Harvey Publications, Inc. The suit was settled in late 2002; at the time of the settlement, the New York Supreme Court had dismissed Harvey's claims against Geppi. The settlement agreement allowed Geppi to keep the art, with no money changing hands.[12][13]

The rights to Sad Sack are still owned by Alan Harvey, and have since been published under the name of Lorne-Harvey Publications and Re-Collections.[14]

Private Sad Sack (played by Mel Blanc) made an appearance with Bob Hope and Betty Grable on the April 29, 1944, episode of G.I. Journal. The voice Blanc used was a stuttering delivery similar to Porky Pig. The character as voiced by Blanc appeared in multiple other broadcasts of "G.I. Journal".

Sponsored by Old Gold Cigarettes, The Sad Sack radio program ran in 1946 as a summer replacement series for The Frank Sinatra Show.[15] It starred Herb Vigran in the title role with Jim Backus, Sandra Gould, Ken Christy and Patsy Moran. Dick Joy was the announcer for the series which began June 12, 1946, with the episode "Sack Returns Home from the Army" and continued until September 4 of that year.