State of Austria
State in Austria

listen);[note 1]Austro-Bavarian: Soizbuag) (also known as Salzburgerland) is a state (Land) of the modern Republic of Austria. It is officially named Land Salzburg to distinguish it from its eponymous capital — the city of Salzburg. For centuries, it was an independent Prince-Bishopric of the Holy Roman Empire.

The state of Salzburg covers area of 7,156 km2 (2,763 sq mi). It stretches along its main river — the Salzach – which rises in the Central Eastern Alps in the south to the Alpine foothills in the north. It is located in the north-west of Austria, close to the border with the German state of Bavaria; to the northeast lies the state of Upper Austria; to the east the state of Styria; to the south the states of Carinthia and Tyrol. With 529,085 inhabitants, it is one of the country's smaller states in terms of population.

Running through the south are the main ranges of the Alpine divide (incl. the Hohe Tauern mountains) with numerous three-thousanders. The Dachstein massif and the Berchtesgaden Alps ranges of the Northern Limestone Alps border Salzburg Land to the east and north. Wals-Siezenheim, a common municipality with about 12,000 inhabitants, is known as 'Austria's largest village'.

Salzburg as an independent state

Independence from Bavaria was secured in the late 14th century. The Archbishopric of Salzburg was an independent prince-bishopric and State of the Holy Roman Empire until German Mediatisation in 1803.

The territory was secularized and, as the Electorate of Salzburg, given as compensation to Ferdinand III, former Grand Duke of Tuscany, the brother of Emperor Francis II.

The end of independence

Following the Austrian defeat at Austerlitz in 1805, Salzburg was annexed by Austria as compensation for the loss of Tyrol to the Kingdom of Bavaria, and Ferdinand was transferred to the Grand Duchy of Würzburg.

After Austria's defeat in 1809, the province was handed over to Bavaria in 1810.

The country divided between Bavaria and Austria

In 1816, following the defeat of Napoleon and the provision of adequate compensation to Bavaria at the Congress of Vienna, it was returned to Austria with the exception of the north-western Rupertiwinkel which remained Bavarian. The Salzburger Land was administered as the department of Salzach from Linz, the capital of Upper Austria. In 1849 the Duchy of Salzburg was established as a crown land of the Austrian Empire and, after 1866, Austria-Hungary.

Salzburg participated in World War I, as part of the Austro-Hungarian Empire. 49,000 Salzburgers were called to arms, of whom 6,000 were killed.[6]

In 1918 after World War I, the Duchy of Salzburg was dissolved and replaced with the State of Salzburg, as a component part initially of German Austria and subsequently of the First Republic of Austria, the separate state which was mandated by the Allied powers.

In the Anschluss, Austria, including Salzburg state, was incorporated into Nazi Germany in 1938.

After the defeat of Nazi Germany in 1945, the Allies occupied the territory of Austria, being recognized as an independent territory under their rule. Salzburg was occupied by the United States.

Salzburg as an Austrian State

In 1955 Austria was again declared independent of the Allies and Salzburg was once again one of the reconstituted federal states of the second Republic Austria. 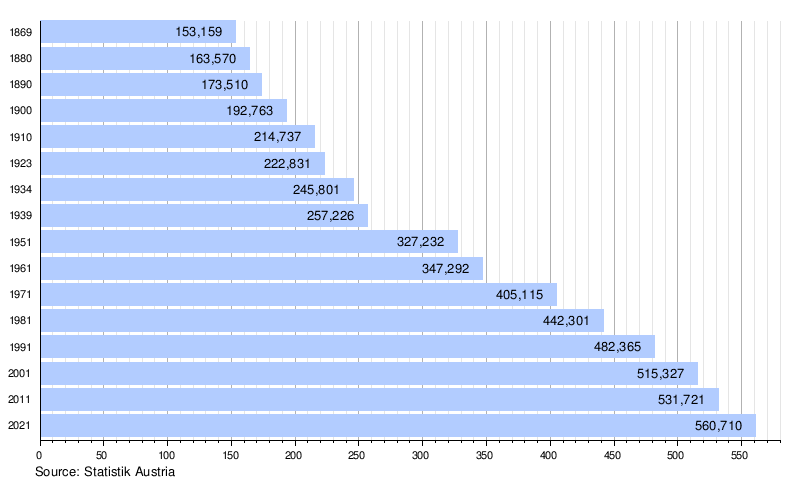 Salzburg adopted its current state constitution in 1999. The state government (Landesregierung) is headed by a Landeshauptmann (governor), who is elected by a majority in the Landtag parliament. State elections are held every five years.

After World War II, most state governments were led by the conservative Austrian People's Party (ÖVP). The ÖVP politician Josef Klaus (1910-2001), later Chancellor of Austria, served as Landeshauptmann from 1949 to 1961. In 2004 Gabi Burgstaller became the first Social Democratic (and first female) Salzburg governor.

Chiemseehof, seat of the Salzburg Landtag

The elected Salzburg Landeshauptmann is Wilfried Haslauer (ÖVP), chairing a coalition government of ÖVP, Greens and NEOS ministers (Landesräte). The current president (speaker) of the Salzburg Landtag is his party fellow Brigitta Pallauf.

The State of Salzburg comprises six districts, known as Bezirke or vernacularly Gaue:

Salzburg city is its own administrative district.

The state is divided into 119 municipalities, including Salzburg city. 11 of them have city status (Städte), 24 are market towns (Marktgemeinden) and the other 84 are simple municipalities (Gemeinden). Below is a list of all the municipalities divided by district:

The Gross domestic product (GDP) of the state was 29 billion € in 2018, accounting for 7.5% of the Austria's economic output. GDP per capita adjusted for purchasing power was 46,500 € or 154% of the EU27 average in the same year. Salzburg is the state with the highest GDP per capita in Austria before Vienna.[8]

The Salzburg Cathedral was the first Baroque building in the German-speaking artistic world. Two other important buildings initiated by the Salzburg archbishops were Hohenwerfen Castle and Hohensalzburg Fortress. The first Archbishop of Salzburg was Arno of Salzburg (785–821), in whose honor the world-famous hiking circuit — the Arnoweg — is named.

The predominant stylistic elements of Salzburg architecture have their origins in the Baroque and the Rococo periods.

Salzburg city's historic centre was named by UNESCO as a World Heritage Site.

States of Austria
Cities and districts (Bezirke) of the state of Salzburg
Authority control
Categories
Categories: