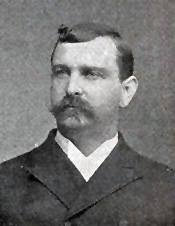 Robertson was elected as a Democrat to the Fiftieth Congress to fill the vacancy caused by the death of his father, Edward White Robertson. He was reelected to the Fifty-first and to the eight succeeding Congresses, serving from December 5, 1887, to March 3, 1907.

He served as chairman of the Committee on Levees and Improvements of the Mississippi River (Fifty-second Congress). He was an unsuccessful candidate for renomination in 1906, and resumed the practice of law in Baton Rouge. He was superintendent of the Louisiana School for the Deaf and Dumb from 1908–1911, and died in Baton Rouge, Louisiana, December 24, 1911. He was interred in Magnolia Cemetery.