Practice of including primary sources along with journalistic stories 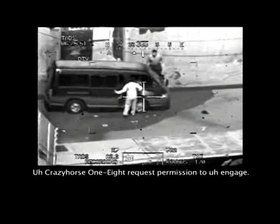 The first part of the Collateral Murder piece released by WikiLeaks, which also included a complete, unedited version of the video, as well as one which provides additional context and political analysis.

Scientific journalism is the practice of including primary sources along with journalistic stories. The concept has been championed by Julian Assange of WikiLeaks[1][2] and is inspired by the philosophy of Karl Popper.[3]

Primary-source hosting allows the reader to verify a document's information. Assange said in a 2010 interview with The New Yorker, "I want to set up a new standard: 'scientific journalism.' If you publish a paper on DNA, you are required, by all the good biological journals, to submit the data that has informed your research—the idea being that people will replicate it, check it, verify it. So this is something that needs to be done for journalism as well. There is an immediate power imbalance, in that readers are unable to verify what they are being told, and that leads to abuse."[1]

Concordia University Professor Lisa Lynch proposes that in scientific journalism, "journalists serve as intermediaries presenting analyses to the public, but they must also provide the public with the means to reproduce their analyses."[4]

The rationale is that where once newspapers were limited in what they could publish by the length of the page, digital technologies provide essentially unbounded capabilities for hosting primary-source documents.

The most notable examples are the releases of WikiLeaks. Along the same lines are similar projects, like Federation of American Scientists and Public Intelligence, which publish complete military and intelligence documents along with commentary and context.