This article may be expanded with text translated from the corresponding article in Japanese. (September 2015) Click [show] for important translation instructions. View a machine-translated version of the Japanese article. Machine translation like DeepL or Google Translate is a useful starting point for translations, but translators must revise errors as necessary and confirm that the translation is accurate, rather than simply copy-pasting machine-translated text into the English Wikipedia. Do not translate text that appears unreliable or low-quality. If possible, verify the text with references provided in the foreign-language article. You must provide copyright attribution in the edit summary accompanying your translation by providing an interlanguage link to the source of your translation. A model attribution edit summary is Content in this edit is translated from the existing Japanese Wikipedia article at [[:ja:セクターゾーン]]; see its history for attribution. You should also add the template ((Translated|ja|セクターゾーン)) to the talk page. For more guidance, see Wikipedia:Translation.
This article needs additional citations for verification. Please help improve this article by adding citations to reliable sources. Unsourced material may be challenged and removed.Find sources: "Seicross" – news · newspapers · books · scholar · JSTOR (February 2022) (Learn how and when to remove this template message)
1984 video game

Seicross, known as Sector Zone[a] in Japan, is a shooter arcade game developed and released by Nichibutsu in Japan and North America. Despite the original arcade game being titled Sector Zone, Nichibutsu later ported it to the Famicom as Seicross (セクロス). This port was also published in North America for the Nintendo Entertainment System by FCI. 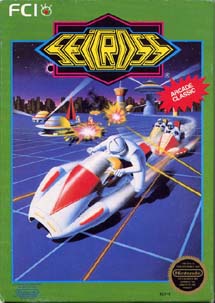 During the game play of Seicross, the player rides a gliding motorcycle-like vehicle, bumping other riders, collecting power modules and collecting blue people who are stranded. A second area removes the riders and adds rough terrain, while the final leg features a battle with one or more Dinosaur Tanks, which launch their heads when destroyed. The sequence repeats infinitely, getting progressively difficult and changing backgrounds.

Gene Lewin of Play Meter rated the arcade game 8 out of 10, stating it "is challenging as well as fun to play."[2]