Sexual harassment in the military is unwanted sexual behaviour, which is defined as threatening, offensive, or otherwise upsetting to others in a military setting. The behaviour is more common in the military than in civilian life. Women are substantially more likely than men to experience sexual harassment in the armed forces. Other groups at higher risk include child cadets/recruits and military detainees.

Sexual harassment is unwanted sexual behaviour which is threatening or otherwise upsetting to others.[2][3][4][5] Some example definitions in use by state armed forces are:

In the British army, a woman told the following story to researchers in 2006:

‘A friend was out on an exercise when a group of men ducked her head in a bucket of water and each time she came up for breath she had to repeat “I am useless and I am a female”. She told the story and said it was a joke but I could see she was upset.’[6]

In the Canadian armed forces, demeaning attitudes to women are pervasive, according to the Deschamps Review of 2015:

'Interviewees reported regularly being told of orders to “stop being pussies” and to “leave your purses at home” [...] The use of the word “cunt”, for example, is commonplace, and rape jokes are tolerated. [...] A commonly held attitude is that, rather than be a soldier, a sailor or an aviator, a woman will be labeled an “ice princess”, a “bitch”, or a “slut”. Another saying is that women enter the CAF “to find a man, to leave a man, or to become a man”.'[4]

A woman in the French army, pseudonymised by the Independent newspaper as Captain Carole, was raped by her commanding officer:

'It was months before I could pronounce the word "rape"... I blamed myself. I said: "We are trained in hand to hand combat. Why didn’t I stop him?" But when that happens you are terrorised.'[7]

In the US Army, a woman recalls attending a class for sexual abuse and sexual harassment training, titled 'personal development training'. The senior officer teaching the class asked participants whether they would hit on 'a naked, drunk girl on the bench outside your barracks', adding, 'you're not supposed to but I probably would.'[8]

US Senator Martha McSally, an Arizona Republican, said during a Senate meeting on sexual assault in the military that she was raped by a superior officer in the US Air Force. McSally was the first female pilot in the US Air Force to fly in combat operations.[9] She said that she never reported the rape because she did not trust the military justice system; she also said that she blamed herself for the incident, and that she had thought she was strong but felt powerless.[10]

Studies of sexual harassment have found that it is markedly more common in military than civilian settings.[3][11] In the UK, for example, between 2015 and 2020 girls aged 16 or 17 in the armed forces were twice as likely as their civilian peers to report rape or other sexual assault.[12]

Several reasons for this have been suggested. A Canadian study found that key risk factors associated with military settings are the typically young age of personnel, the isolated locations of bases, the minority status of women, and the disproportionate number of men in senior positions.[13] Other Canadian research has found that an emphasis in military organisations on conformity, obedience, and hierarchical power relations, combine to increase the risk, particularly to personnel of low rank, who are less able than others to resist inappropriate expectations made of them.[4] The traditionally masculine values and behaviours that are rewarded and reinforced in military settings are also thought to play a role.[14][15][16][4][17]

In the UK, the 2019 Wigston Review into inappropriate sexual behaviours in the armed forces reported that several military factors contributed to risk: 'tight-knit units that perceive themselves as "elite"; masculine cultures with low gender diversity; rank gradients; age gradients; weak or absent controls, especially after extensive operational periods; and alcohol.'[18]

Canadian research has also found that the risk of sexual misconduct increases during deployment on military operations.[13]

While some male personnel are sexually harassed, women are substantially more likely to be affected.[13][4][3][19][20][21] Women who are younger and joined the military at a younger age face a greater risk, according to American, British, Canadian, and French research.[22][6][4][7]

Cadet forces are military youth organisations for younger teenagers based in communities and schools, and are common around the world.[23][24][25][26] There is some evidence from the UK, where hundreds of complaints of the sexual abuse of cadets have been recorded since 2012, and from Canada, where one in ten complaints of sexual assault in the military are from cadets, that these institutions are susceptible to a culture of sexual harassment.[27][28][29][30][31]

Individuals detained by the military are particularly vulnerable to sexual harassment. During the Iraq War, for example, personnel of the US army and US Central Intelligence Agency committed a number of human rights violations against detainees in the Abu Ghraib prison,[32] including rape, sodomy, and other forms of sexual abuse.[33][34][35] Another example is the detention of two Iraqi men on a British warship at the start of the Iraq War, when they were made to strip naked and were then sexually humiliated.[36]

Although the risk of sexual misconduct in the armed forces is widely acknowledged, personnel are frequently reluctant to report incidents.[3][4][6][7][37][38][19] For example:

Since the number of official complaints represents only a fraction of sexual harassment in the military,[3][20] armed forces that have committed to reduce prevalence produce periodic estimates of its extent using anonymised surveys.[3][20]

Women affected by sexual harassment are more likely than other women to suffer stress-related mental illness afterwards.[13] Research in the US found that when sexual abuse of female military personnel is psychiatrically traumatic, the odds of suffering from post-traumatic stress disorder (PTSD) after deployment on operations increase by a factor of nine.[11]

Research in the US has found that personnel affected by sexual harassment are somewhat less likely to develop depression or PTSD if a formal report leads to effective action to address the issue.[40] 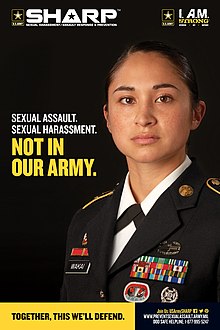 The military leadership in some countries has begun to acknowledge a culture of sexual misconduct in the armed forces. For example:

Sexual harassment in the military, by country

Widespread reports of sexual harassment in the Australian armed forces led to the establishment of the Defence Abuse Response Taskforce to investigate complaints from women between 1991 and 2011. It received 2,439 complaints, of which it deemed 1,751 to be plausible.[37]

According to official statistics gathered by Maclean's magazine, the Canadian military police received an average of 178 complaints of sexual assault per year between 2000 and 2014, representing an estimated 10% of all cases.[31]

In 2014, the ombudsman of the Canadian armed forces described sexual harassment in the institution as 'a huge problem'.[31]

In 2015, after widespread allegations of sexual misconduct in the military, a major official report, the External Review into Sexual Misconduct and Sexual Harassment in the Canadian Armed Forces (the Deschamps Review), was published.[4] It found that sexual harassment was commonplace and embedded in military culture, and that pervasive degrading attitudes to women and LGBTQ personnel were jeopardising their safety.[4] The Deschamps Review also criticised the armed forces for a culture of dismissiveness.[4] One male interview told the Review, for example: "Girls that come to the Army know what to expect." It stated that senior NCOs are frequently seen as tolerating sexual harassment and discouraging the individuals affected from making a complaint.[4]

A notable case is that of Russell Williams, a colonel in the Royal Canadian Air Force. He progressed from breaking into homes, sexual assault with no penetration, to rape and murder. He kept detailed reports of his crimes and left notes and messages for his victims.[46] He was charged with breaking and entering, forcible confinement, and the sexual assault of two women in connection with two separate home invasions near Tweed, Ontario in September 2009. Williams was also charged in the death of Corporal Marie-France Comeau, a 37-year-old military traffic technician based at CFB Trenton, who had been found dead inside her home in late November 2009.[47] He was sentenced on 22 October 2010 to two concurrent terms of life imprisonment, with no consideration of parole for 25 years. He is housed in a maximum-security prison in Port-Cartier, Quebec.

The extent of sexual harassment in the French armed forces first came to light in 2014 when 35 cases of sexual harassment and assault were detailed in La Guerre Invisible, a book by Leila Minano and Julia Pascual.[19] According to the Independent newspaper, the armed forces had not been required to report incidents or to keep statistics, and an official report acknowledged that awareness of the problem had been institutionally suppressed.[7]

Following concerns expressed in 2004 by the UK Equal Opportunities Commission (now the Equality and Human Rights Commission) about persistent sexual harassment in the British armed forces,[6] a number of anonymised, official surveys have been undertaken. The first, in 2006, found that a male-dominated culture sexualised women and diminished their military competence.[6] Among the comments made to researchers by male personnel about their female counterparts were: ‘Ok there are a few exceptions but on the whole they [women] shouldn’t be here.’; 'They're all lesbians or sluts.'; and 'They are emotionally unstable.'[6] The report found that 15% of women had had a 'particularly upsetting' experience of sexual harassment in the previous 12 months; the proportion rose to 20% in the youngest age group.[6] A similar survey in 2009 found the 8% of women in the army had had a ‘particularly upsetting’ experience in the previous 12 months, and the most recent survey, in 2015, found that 13% of women reported the same.[3]

In 2017, a BBC Panorama documentary found multiple cases of the sexual abuse of cadets from age 11 during the 1980s, and reported that the victims and their parents were discouraged from making a formal complaint or contacting the police.[27] The Ministry of Defence paid £2 million in 2012 and 2013 to settle allegations of the child sexual abuse of military cadets,[28] and between 2012 and 2017 recorded a further 363 allegations, of which 282 were referred to the police.[29][48]

The Navy's 1991 Tailhook scandal exposed the egregious acts that occurred during the 35th annual convention in Las Vegas, NV, where 100 Navy and Marine Corp. aviation officers sexually assaulted 83 women and 7 men.[49] Active Navy Lieutenant, aviator, victim, and whistleblower, Paula Coughlin, appeared before congress in 1991 to testify about the sexual abuse and sexual harassment she endured at the hands of her comrades at Tailhook. Her testimony led to improved regulations intended to combat sexual harassment and assault in the military.[50]

In 2017, the Department of Defense reported that an estimated 14,900 military personnel were sexually assaulted in 2016,[20] of whom 6,172 made an official complaint.[39] According to an article published in Medscape, up to 80% of women in the armed forces have been sexually harassed, and 25% have experienced a sexual assault.[52]

Andrew Loya was a former Coast Guard officer who shot dead one of his female colleagues; he maintains that she made sexual advances which resulted in him getting transferred to another department. [53]