Men of the Regiment of Ludhiana (later the 15th Ludhiana Sikhs) during the Second Opium War in China, circa 1860.

The Sikh Regiment is an infantry regiment of the Indian Army. Sikh regiment is the highest decorated regiment of the Indian Army and in 1979, the 1st battalion was the Commonwealth's most decorated battalion with 245 pre-independence and 82 post-independence gallantry awards, when it was transformed into the 4th battalion, Mechanised Infantry Regiment.[4][5][6] The first battalion of the regiment was officially raised just before the partial annexation of the Sikh Empire on 1 August 1846, by the British East India Company. Currently, the Sikh Regimental Centre is located in Ramgarh Cantonment, Jharkhand. The Centre was earlier located in Meerut, Uttar Pradesh.

The modern Sikh Regiment traces its roots directly from the 11th Sikh Regiment of the British Indian Army. When transferred to the Indian Army like its sister regiments, the numeral prefix (in the case of the Sikh Regiment, 11) was removed and extra battalions were raised, transferred or disbanded to meet army needs. With a humble beginning of two battalions, today the fraternity has grown to a regiment of 19 regular infantry and two reserve battalions strong. The 6th battalion takes over as ceremonial battalion of President's palace of India.[7][8]

After the First Anglo-Sikh War (1845-1846), Sikhs who lived in the territory ruled by the Sikh Empire (the Punjab region) began to be recruited into the Bengal Army of the British East India Company. Among the earliest entirely Sikh units of the Bengal Army were the Regiment of Ferozepore (raised in 1846) which later became the 14th King George's Own Ferozepore Sikhs, and the Regiment of Ludhiana (also raised in 1846) which later became the 15th Ludhiana Sikhs.[9] After the Second Anglo-Sikh War (1848-1849) more Punjabis began to be recruited into the Bengal Army, forming regiments such as the 1st Bengal Military Police Battalion, which later became the 45th Rattray's Sikhs. Sikh units generally remained loyal to the British during the Indian Rebellion of 1857, in which many regiments of the Bengal Army (which mainly recruited from Bengal, Bihar and Awadh) mutinied against their British officers. After the rebellion, troops from Bihar and Awadh were recruited less as they had led the mutiny; the centre of recruitment then shifted to the Punjab and the North-West Frontier, resulting in more Sikhs being recruited into the Bengal Army. A number of new Sikh regiments were raised, such as the 36th Sikhs and 35th Sikhs, both raised in 1887. 21 soldiers of the 36th Sikhs fought in the Battle of Saragarhi against 6,000-10,000 Pashtun tribesmen in 1897 during campaigns in the North-West Frontier, in what is considered by some military historians as one of history's greatest last stands.[10] In 1922 the Indian government reformed the British Indian Army by amalgamating single battalion regiments into multi-battalion regiments; this led to the formation of the 11th Sikh Regiment from the 14th King George's Own Ferozepore Sikhs, the 15th Ludhiana Sikhs, the 45th Rattray's Sikhs, the 36th Sikhs, the 47th Sikhs, and the 35th Sikhs. The 11th Sikh Regiment served during World War II and on the partition of India, the regiment was allotted to the newly formed Indian Army, becoming the Sikh Regiment.

Sikh regiment is a "single class" regiment.[12] Its soldiers are solely recruited from Jat Sikhs and its officers are non-Jat Sikhs.[13][14] They are trained at the Sikh Regimental Centre, currently located in Ramgarh Cantonment, Jharkhand. The war cry of the regiment, taken from Sikh scriptures, is Jo Bole So Nihal, Sat Sri Akal.[a] 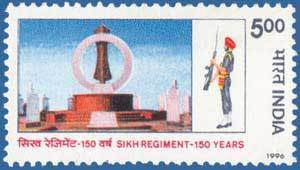 2006 postal stamp on 150 years of Third Battalion, The Sikh Regiment French postcard depicting the arrival of 15th Ludhiana Sikhs in France during World War I. The postcard reads, "Gentlemen of India marching to chasten the German hooligans". A Sikh soldier with the flag of Nazi Germany after German surrender during World War II. About 5000 Sikh soldiers, some belonging to the regiment, mutinied after the storming of the Golden Temple by the Indian Army as part of Operation Blue Star in 1984.[15] The Sikh Regiment's 9th battalion was disbanded after a large number of its troops mutinied.[16] The Sikh Regiment marching contingent passes through the Rajpath during the 66th Republic Day Parade, 2015

In all, the regiment has to its credit 1652 gallantry awards and honours including:

In addition it has also earned:

21 soldiers of the 36th Sikhs were posthumously awarded the Indian Order of Merit for their actions in the Battle of Saragarhi in 1897:[17][18]