This article needs additional citations for verification. Please help improve this article by adding citations to reliable sources. Unsourced material may be challenged and removed.Find sources: "Software calculator" – news · newspapers · books · scholar · JSTOR (November 2016) (Learn how and when to remove this template message) 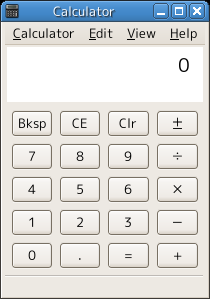 A software calculator is a calculator that has been implemented as a computer program, rather than as a physical hardware device.

They are among the simpler interactive software tools, and, as such, they provide operations for the user to select one at a time. They can be used to perform any process that consists of a sequence of steps each of which applies one of these operations, and have no purpose other than these processes, because the operations are the sole, or at least the primary, features of the calculator, rather than being secondary features that support other functionality that is not normally known simply as calculation.

As a calculator, rather than a computer, they usually have a small set of relatively simple operations, perform short processes that are not compute intensive and do not accept large amounts of input data or produce many results. Software calculators are available for many different platforms, and they can be:

Computers as we know them today first emerged in the 1940s and 1950s. The software that they ran was naturally used to perform calculations, but it was specially designed for a substantial application that was not limited to simple calculations. For example, the LEO computer was designed to run business application software such as payroll.

Software specifically to perform calculations as its main purpose was first written in the 1960s, and the first software package for general calculations to obtain widespread use was released in 1978.[1] This was VisiCalc and it was called an interactive visible calculator, but it was actually a spreadsheet, and these are now not normally known simply as calculators.

Calculators have been used since ancient times and until the advent of software calculators they were physical, hardware machines. The most recent hardware calculators are electronic hand-held devices with buttons for digits and operations, and a small window for inputs and results.

Software calculators on the Internet

This section does not cite any sources. Please help improve this section by adding citations to reliable sources. Unsourced material may be challenged and removed.Find sources: "Software calculator" – news · newspapers · books · scholar · JSTOR (November 2016) (Learn how and when to remove this template message)

There is now a very wide range of software calculators, and searching the Internet produces very large numbers of programs that are called calculators.

Every type of hardware calculator has been implemented in software, including conversion, financial, graphing, programmable and scientific calculators.

Window-based calculators present a dialog box that allows users to enter data, rather than data and operations, and they have a built-in formula that is automatically applied to this data. There are many examples of such calculators in finance, mathematics, science and other disciplines.

There are software calculators that contain operations relevant to a specific application area and profession, including automotive, construction and electrical engineering.

Some programs can generate a list of astronomical events of certain types during a period of time, e.g. a year. Astronomical calculators can be also a part of a simulation software, displaying the sky at a certain time.

There are some software games that are called calculators, including:

Spreadsheets are not normally called calculators because their main purpose is to organise data in rows and columns, and to automatically update the values of possibly many dependent cells when the value in another cell changes. The calculation features are only used in a supporting role to specify the values in some cells.

Computer algebra systems are not normally called calculators because their main purpose is to perform symbolic manipulation of mathematical expressions that can contain variables and complex operations, such as integration. However, the expressions can be basic calculations that do not use variables, and that are simply evaluated, as with a calculator.

Databases are not normally called calculators because their main purpose is data entry and storage, plus reporting against this data. The calculation features are only used in a supporting role to specify the values in some fields.