This article possibly contains original research. Please improve it by verifying the claims made and adding inline citations. Statements consisting only of original research should be removed. (August 2017) (Learn how and when to remove this template message)

South Bengal (Bengali: দক্ষিণবঙ্গ/দক্ষিণ বাংলা) is a term used for the southern parts of Bengal including Southern Bangladesh and Southern West Bengal, state in India. [1][2]

The Bangladesh part denotes the Khulna Division, Barisal Division and proposed Faridpur Division. Bay of Bengal is located at the end of southern part of Bangladesh.[3][self-published source?][4] 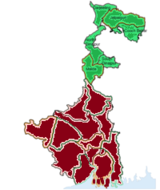 Bangladesh
Maps of the West Bengal (India) and Bangladesh, showing North Bengal in green and the South Bengal in red.

Major cities and towns in the South Bengal are (in alphabetical order):