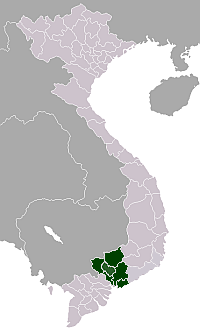 Đông Nam Bộ (literally "Southeast region") is a region in Vietnam. This region includes one municipality, Ho Chi Minh City; and five provinces: Đồng Nai, Bình Dương, Bà Rịa–Vũng Tàu province, Bình Phước and Tây Ninh. The two southern provinces Ninh Thuận and Bình Thuận are sometimes seen as part of the Southeast region. This region is the most economically developed region in Vietnam. In 2006, this region contributed 148,000 billion VND (equal to $9.25 billion) out of 251,000 billion VND to the state budget.[1] This region is also the most highly urbanized in the country with more than 50% people living in urban areas (while the equivalent figure for Vietnam is just 25%).

Tan Son Nhat International Airport is the largest airport in Vietnam, with the passenger traffic of 8.5 million in 2006 but it will be replaced by a larger newly constructed airport, Long Thanh International Airport after 2025. Lien Khuong Airport is an important airport in this area. Saigon Port and several deep-water ports in Bà Rịa–Vũng Tàu are the busiest ports in the country. National Road 1 and National Road 51, and TransAsia Highway are the principal roads in this region.