This article needs additional citations for verification. Please help improve this article by adding citations to reliable sources. Unsourced material may be challenged and removed.Find sources: "Spycraft" – news · newspapers · books · scholar · JSTOR (March 2019) (Learn how and when to remove this template message)

Spycraft is a d20 and OGL-based role-playing game dealing with superspies and modern action. Originally published by the Alderac Entertainment Group (AEG), it is currently published under licence by Crafty Games.

Originally envisioned—and initially publicised—as a paranormal superspy game called Series Archer, the game was split into 2 complementary product lines: Spycraft (silver trade dress) which devoted itself to a generic cinematic superspy/action setting, and Shadowforce Archer (black trade dress) which featured a setting focused on a global shadow conspiracy based on a wide variety of supernatural elements. After the release of the core book (subsequently referred to as the Spycraft Espionage Handbook[1]) in 2002, multiple print supplements were released in the following years for both lines. Each of these books sported highly distinctive cover art by artist Veronica V. Jones.

A new edition of the rules, Spycraft 2.0, was released in August 2005.[2] Shortly afterwards, economic issues forced AEG to cull Spycraft from its product range. As a result, early in 2006 the core authors of the 2nd edition – Alex Flagg, Scott Gearin and Patrick Kapera (who also co-authored Spycraft 1.0)[1]) – formed Crafty Games to continue the line under licence, predominantly through PDF file releases supported by strategic print releases. This model has changed over time, permitting a growing number of print releases including compilations of previous PDF releases. During this time Crafty Games began referring to Spycraft 1.0 as Classic Spycraft.[3] 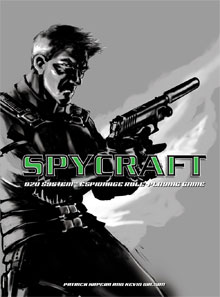 Classic Spycraft is a d20 System game, implementing a number of changes to the core mechanics in order to give a more contemporary feel:[1]

Spycraft 2.0 took these changes a step further and was released under the Open Game Licence (OGL), but not the d20 System Trademark License. There were also numerous changes from Classic Spycraft, such as:

The first of all the Spycraft campaign settings. The world of Shadowforce Archer (SFA) is an Earth where mystical and psionic powers are real. A series of supplemental books that were released to support the SFA worldbook. Each book details one of the international Chambers of the world. Each book has a different theme and includes new rules and agent options appropriate to the theme. The setting was discontinued at the beginning of 2005. Spycraft 2.0 contains many classes and feats that first appeared in the SFA line.

Released in 2004 by Mythic Dreams Studios, Dark Inheritance (DI) was originally a d20 Modern campaign setting but converted across to the Powered by Spycraft banner using the Classic Spycraft rules. It describes an Earth that has been ravaged by ancient mystical powers, allowing Demons and other foul beasts access to this dimension. The setting book contains new rules that allow agents to play as Titans (powerful descendants of antediluvian demi-gods), worship the demonic forces and gain access to mystic powers (reprinted from the SFA world book).

There are a number of supplements planned for DI, similar in fashion to those for SFA. There is no release date as yet for any of these supplements.

Released in December 2007, World On Fire is the title of the world book that covers the setting detailed in the Spycraft CCG. Agents are able to fight the forces of evil alongside such groups as the Shadow Patriots and Banshee.Net. The book features even more character options (in the form of new origins, base and expert classes, and new master classes for higher level characters). New classes include the Ace, the Centurion, the Edgemaster, the Fixer, the Forward, the Goliath, the High Roller, the Martial Artist, the Medic, the Menace, the Mole, the Ninja, the Provocateur, the Saboteur, the Spin Doctor, the Street Knight, and the Terrorist.

Fantasy Craft was released in both hardcover and PDF formats in 2009 through the Flaming Cobra imprint of Mongoose Publishing. Following Crafty Games' parting with Mongoose,[5] a soft-covered second printing incorporating the errata generated up to that point was released in 2010.

Originally the game was intended for release as an expansion of the Spycraft 2.0 ruleset, following up the first two Origin of the Species electronic products that added character creation options for a variety of standard fantasy and classical Greek non-humans to the ruleset. During the development process, the decision was made by Crafty Games to instead take the opportunity to significantly streamline the game mechanics in response to user feedback and create the ruleset referred to as Mastercraft. This permitted the release of Fantasy Craft as a standalone product under the Open Gaming Licence, including full rules for character generation, conversion mechanics for monsters found in the System Resource Document, and the tools for creating, populating and presenting user-generated campaign settings to players.

Fantasy Craft was nominated in 2010 for an Origins award for best RPG [6] and an ENnie for Best Writing; it also received an honorable mention at that year's ENnies for Product of the Year.[7]

2010 also saw two further Fantasy Craft soft-covered print products, both of which reprinted previously electronically published material. The first was Time of High Adventure, which compiled the previously published "The Darkest Hour" and "Cleansing of Black Spur" and added a third original mission as well as a chapter expanding upon the implied setting of all three modules. This was followed up by the Adventure Companion, which contained 3 campaign settings originally intended for release as part of the core book before being cut for space, and a fourth chapter offering a number of new game mechanic options, including a compilation of the non-spellcasting "Call to Arms" character class releases, some additional classes and a small library of additional specialities, feats and tricks.[8]

A fourth print release titled Spellbound is currently slated for publication. In addition to compiling the spellcasting "Call to Arms" character class releases, its content is focused on greatly expanding the mechanical and narrative options for magic use in a Fantasy Craft game.

Long teased on the Spycraft forums under the name 'Project X', Ten Thousand Bullets is a gritty crime setting intended to bring Spycraft down to street level with new rules to allow players to become police, gangsters and everything in between. Originally intended for release at Gen Con Indy 2007, the creative process behind Fantasy Craft has resulted in its being slated for release as a Mastercraft title.

Spycraft has a long history with organized play and living campaigns. For 5 years Spycraft could be played as part of the Living Spycraft campaign, which was a part of the RPGA (Role Playing Game Association) network of Living Campaign settings.

The Living Spycraft campaign had been in the planning stages for a while before RPGA approval was provided on 29 August 2002[9] with the campaign starting properly in October 2002 utilising the, then current, Classic Spycraft rules. In 2005 the campaign converted to the Spycraft 2.0 rules but, at the end of 2007, Crafty Games ended the campaign[10] although the original campaign scenarios are still available as free downloads.[11] A number of volunteers who ran the Living Spycraft campaign restarted it independently as Spymaster but this campaign ceased in 2010.[12] Likewise, in 2008 a UK-only campaign, called For Queen & Country, started. This campaign utilises a version of Classic Spycraft that incorporates aspects of Spycraft 2.0.[13]

Crafty Games has re-released the first edition books in PDF format.[14] The first two PDF releases, the Spycraft Espionage Handbook and Shadowforce Archer came with a Conversion Document that allows owners to use the material with Spycraft 2.0.

There are currently 28 supplements available for the new version of Spycraft (21 from Crafty Games and 6 licensed products).

The Spycraft system was used in the Stargate SG-1 role-playing game. This has often been referred to as Spycraft 1.5 due to some small changes that were made to the Spycraft 1.0 rules and were subsequently incorporated into Spycraft 2.0, such as Gear Picks.