Stanford Law School employs more than 90 full-time and part-time faculty members and enrolls over 550 students who are working toward their Doctor of Jurisprudence (J.D.) degree. Stanford Law also confers four advanced legal degrees: a Master of Laws (LL.M.), a Master of Studies in Law (M.S.L.), a Master of the Science of Law (J.S.M.), and a Doctor of the Science of Law (J.S.D.). Each fall, Stanford Law enrolls a J.D. class of approximately 180 students, giving Stanford the smallest student body of any law school ranked in the top fourteen (T14). Stanford also maintains eleven full-time legal clinics,[9] including the nation's first and most active Supreme Court litigation clinic,[10] and offers 27 formal joint degree programs.[11]

Stanford first offered a curriculum in legal studies in 1893, when the university hired its first two law professors: former U.S. president Benjamin Harrison and Nathan Abbott. Abbott headed the new program and assembled a small faculty over the next few years. The law department primarily enrolled undergraduate majors at this time and included a large number of students who might not have been welcome at more traditional law schools at the time, including women and students of color, especially Hispanic, Chinese and Japanese students.[12]

In 1900, the department moved from its original location in Encina Hall to the northeast side of the Inner Quadrangle. These larger facilities included Stanford's first law library. Beginning to focus more on professional training, the school implemented its first three-year curriculum and became one of 27 charter members of the Association of American Law Schools (AALS).[13] In 1901, the school awarded its first professional degree, the Bachelor of Laws (LL.B.).[12]

Starting in 1908, the law department began its transition into an exclusively professional school when Stanford's Board of Trustees passed a resolution to officially change its name from Law Department to Law School. Eight years later, Frederic Campbell Woodward became the first dean of the law school, and in 1923, the law school received accreditation from the American Bar Association (ABA).[14] In 1924, Stanford's law program officially transitioned into a modern professional school when it began requiring a bachelor's degree for admission.[12]

The 1940s and 1950s brought considerable change to the law school. After World War II caused the law school's enrollment to drop to fewer than 30 students, the school quickly expanded once the war ended in 1945. A move to a new location in the Outer Quadrangle, as well as the 1948 opening of the law school dormitory Crothers Hall (the result of a donation by Stanford Law graduate George E. Crothers), allowed the school to grow, while the 1948 inaugural publication of the Stanford Law Review (helmed by future U.S. Secretary of State Warren Christopher '49) helped to augment the law school's national reputation. The decision that Stanford should remain a small law school with a very limited enrollment emerged during this period. For the third time in its history, the law school relocated in the 1970s, this time to its current location in the Crown Quadrangle.[12]

In the 1960s and 1970s, the law school aimed to diversify its student body. During this period, students established a large number of new and progressive student organizations, including the Women of Stanford Law, the Stanford Chicano Law Student Association, the Environmental Law Society, and the Stanford Public Interest Foundation. Additionally, in 1966, the school sought to academically diversify its student body by collaborating with the Stanford Business School to create its first joint-degree program.[12] A year earlier, in 1965, the law school enrolled its first black student, Sallyanne Payton '68, and in 1972, the school hired its first female law professor, Barbara Babcock, and its first professor of color, William B. Gould IV. In 1968, Stanford appointed Thelton Henderson, future judge of the U.S. District Court for the Northern District of California, as the first assistant dean for minority admissions. Henderson expanded minority enrollment from a single student to approximately a fifth of the student body.[12] Stanford Law's commitment to diversity continues today, and The Princeton Review currently ranks Stanford Law as one of the ten best law schools for minority students.[15]

Earning national recognition in the 1980s and 1990s, the law school embarked on innovating its curriculum. Stanford offered new courses focusing on law and technology, environmental law, intellectual property law, and international law, allowing students to specialize in emerging legal fields. In 1984, it launched its first clinical program, the East Palo Alto Community Law Project.[12] By the 21st century, a new focus on interdisciplinary education emerged. In 2009, it transitioned from a semester system to a quarter system to align itself with Stanford's other graduate schools.[16] Stanford also expanded its upper-level offerings in international law, by adding new clinics, academic centers, and simulation courses, and expanded its joint degree programs.[17] 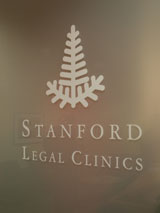 Stanford Law School is known for its student-to-faculty ratio (7.3 to 1), one of the lowest[vague] in the country.[1] The first-year class of approximately 180 students is divided into six smaller sections of 30 students each.[18]

The academic program is flexible. First-year students (or 1Ls) are required to take Civil Procedure, Contracts, Torts, and Legal Research & Writing during the autumn quarter, and Criminal Law, Constitutional Law, Federal Litigation, and one elective during the winter quarter. In the spring quarter, they take Federal Litigation, Property, and enroll in electives. Stanford Law offers 280 course titles beyond the first-year curriculum, and advanced courses range from White-Collar Crime to a Supreme Court Simulation Seminar.[19] Additionally, because of the law school's proximity to other academic programs on campus, there is a strong focus on joint-degree programs and interdisciplinary learning, and upper-level students may take classes at Stanford's other professional and graduate schools.

Stanford Law enables second- and third-year students to gain hands-on experience by working full-time in one of eleven legal clinics, including an Environmental Law Clinic, Criminal Defense Clinic, a Religious Liberty Clinic, and an Intellectual Property and Innovation Clinic.[9] The Supreme Court Litigation Clinic has successfully brought over thirty cases before the Court,[20] making it one of the most active Supreme Court practices of any kind.[21] The clinic has served as lead counsel or co-lead counsel on the merits in numerous cases, including Kennedy v. Louisiana (2008), Melendez-Diaz v. Massachusetts (2009), United States v. Windsor (2013), Riley v. California (2014), and Bourke v. Beshear (2015).[22]

Launched in 2013, Stanford's Law and Policy Lab provides further opportunities for experiential learning. The Policy Lab allows second- and third-year students to enroll in faculty-supervised policy practicums, where students work in small teams to conduct policy research and analysis for real-world clients.[23] Topics have ranged from wildlife trafficking to prison realignment to copyright reform, and prior clients include California Attorney General Kamala Harris, Governor of California Jerry Brown, the California Law Revision Commission, the U.S. Copyright Office, the U.S. Department of Energy, the U.S. Department of the Treasury, and the White House Office of Management and Budget.[24]

Students and alumni routinely report high satisfaction with their academic experience. In surveys conducted by Above the Law, Stanford Law received an "A+" from both students and alumni for their satisfaction with Stanford's academic program, and the law school also received an "A+" rating from students for practical/clinical training, career counseling, and financial aid advising.[25] Based on surveys with students at the nation's 169 best law schools, The Princeton Review currently[when?] ranks Stanford Law as having the best "Classroom Experience",[15] and students provided Stanford with the highest score (99) for its "Academic Experience Rating" and "Professors Interesting Rating".[26] Additionally, the 2014 "Midlevel Associates Survey" conducted by The American Lawyer magazine found that based on mid-level associates' assessments of their legal education, Stanford Law placed in the top five law schools for effectively preparing its graduates for law firm life.[27]

Outside of the classroom, Stanford Law students run over fifty student organizations[28] and publish seven legal journals.[29] The most influential journal is the Stanford Law Review, which has been ranked as the top law review by the Washington & Lee Law Review Rankings in both 2013 and 2014.[30] Advocacy skills are tested in the Marion Rice Kirkwood Moot Court competition.

Between 4,000 and 5,000 students apply for admission each year. Selection is competitive: the median undergraduate grade point average of admitted students is 3.93 and the median LSAT score is 171 (out of 180).[33] Beyond numbers, Stanford places considerable emphasis on factors such as extracurricular activities, work experience, and prior graduate study.[citation needed] About three quarters of the members of each entering class have one or more years of prior work experience and over a quarter have another graduate degree. In 2020, Stanford Law had an acceptance rate of 6.28%, the second-lowest of any law school in the country. The school also accepts a small number of transfers each year.

According to ABA Required Disclosures, Stanford Law School had an average bar passage rate of 98.25% in 2020.[34]

Upon graduation, about a third of the class clerks for a judge; about half join law firms.[35]

According to Stanford Law School's official 2014 ABA-required disclosures, 90.4% of the Class of 2014 obtained full-time, long-term, JD-required employment nine months after graduation, excluding solo-practitioners.[36] Stanford's Law School Transparency under-employment score is 3.2%, indicating the percentage of the Class of 2014 unemployed, pursuing an additional degree, or working in a non-professional, short-term, or part-time job nine months after graduation.[37]

According to the American Bar Association, of 2014 Stanford Law graduates, 90.9% are employed in a position that required the graduate to pass the bar exam; 2.7% are employed in a position in which the employer sought an individual with a J.D. or in which the J.D. provided a demonstrable advantage in obtaining or performing the job, but which did not itself require an active law license; 2.7% are employed in other professional positions; 1.1% are pursuing graduate work full-time; 1.1% have a deferred employment starting date; and 1.6% are unemployed and seeking employment.[38]

A 2015 study by M7 Financial, which assessed law schools' "credit ratings" using data on average starting salaries, employment trends, and student loan obligations, found that Stanford Law had the lowest student debt burden of any law school in the study.[46]

The Stanford Law School faculty ranks among the top three law faculties in the United States in terms of scholarly impact,[48] and faculty members include the most widely cited legal scholars in intellectual property law (Mark Lemley), legal history (Lawrence Friedman), and legal ethics (Deborah L. Rhode).[49] A 2012 study found that five Stanford Law professors are among the 50 most relevant law professors in the nation,[50] and a 2013 study found that 25 percent of Stanford Law School's tenured faculty have been elected to the American Academy of Arts & Sciences.[51]

In 2013, The National Law Journal recognized Professors Jeffrey L. Fisher and Mark Lemley as two of the 100 most influential lawyers in America,[52] and in 2014, a study by Reuters identified former Dean Kathleen M. Sullivan and Professors Jeffrey L. Fisher, Pamela S. Karlan, and Brian Wolfman as among the 66 most successful appellate litigators before the U.S. Supreme Court.[53]