Typical foil strain gauge; the blue region is conductive and resistance is measured from one large blue pad to the other. The gauge is far more sensitive to strain in the vertical direction than in the horizontal direction. The markings outside the active area help to align the gauge during installation.

A strain gauge (also spelled strain gage) is a device used to measure strain on an object. Invented by Edward E. Simmons and Arthur C. Ruge in 1938, the most common type of strain gauge consists of an insulating flexible backing which supports a metallic foil pattern. The gauge is attached to the object by a suitable adhesive, such as cyanoacrylate.[1] As the object is deformed, the foil is deformed, causing its electrical resistance to change. This resistance change, usually measured using a Wheatstone bridge, is related to the strain by the quantity known as the gauge factor.

Simmons was involved in a research project by Dätwyler and Clark at Caltech between 1936 and 1938. They researched the stress-strain behavior of metals under shock loads. Simmon came up with an original way to measure the force introduced into the sample by equipping a dynamometer with fine resistance wires.

Arthur C. Ruge, a professor at MIT, on the other hand, conducted research in seismology. He tried to analyze the behavior of a model water tank installed on a vibration table.  He was not able to utilize the standard optical strain measurement methods of his time due to the small scale and low strains in his model. Professor Ruge (and his assistant J. Hanns Meier) had the epiphany of measuring the resistance change in metallic wires caused by strain cemented on the thin walls of the water tank model.

The development of the strain gauge was essentially just a byproduct of other research projects. Edward E. Simmons and Professor Arthur C. Ruge developed a widely used and useful measurement tool due to the lack of an alternative at their times. Arthur C. Ruge realized the commercial utility of the strain gauge. His employer at MIT waived all claims on the right of the invention, as they did not predict the economic and large-scale usage potential. This prediction turned out to be false. The strain gauge applications were quickly gaining traction as they served to indirectly detect all other quantities that induce strain. Additionally, they were simple to install by the scientists, did not cause any obstruction or property changes to the observed object and thus falsifying the measurement results. Probably the last and most important property was the ease of transmission of the electrical output signal.[2]

A typical strain gauge arranges a long, thin conductive strip in a zig-zag pattern of parallel lines. This does not increase the sensitivity, since the percentage change in resistance for a given strain for the entire zig-zag is the same as for any single trace. A single linear trace would have to be extremely thin, hence liable to overheating (which would change its resistance and cause it to expand), or would need to be operated at a much lower voltage, making it difficult to measure resistance changes accurately.

is the change in resistance caused by strain,

is the resistance of the undeformed gauge, and

For common metallic foil gauges, the gauge factor is usually a little over 2.[3] For a single active gauge and three dummy resistors of the same resistance about the active gauge in a balanced Wheatstone bridge configuration, the output sensor voltage

from the bridge is approximately:

is the bridge excitation voltage.

Foil gauges typically have active areas of about 2–10 mm2 in size. With careful installation, the correct gauge, and the correct adhesive, strains up to at least 10% can be measured. 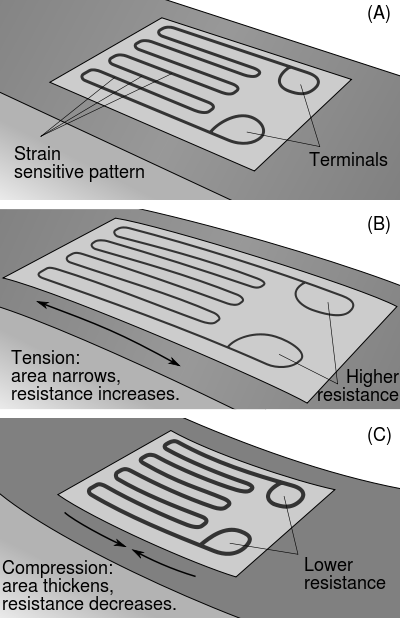 An excitation voltage is applied to input leads of the gauge network, and a voltage reading is taken from the output leads. Typical input voltages are 5 V or 12 V and typical output readings are in millivolts.

Foil strain gauges are used in many situations. Different applications place different requirements on the gauge. In most cases the orientation of the strain gauge is significant.

Gauges attached to a load cell would normally be expected to remain stable over a period of years, if not decades; while those used to measure response in a dynamic experiment may only need to remain attached to the object for a few days, be energized for less than an hour, and operate for less than a second.

Strain gauges are attached to the substrate with a special glue. The type of glue depends on the required lifetime of the measurement system. For short term measurements (up to some weeks) cyanoacrylate glue is appropriate, for long lasting installation epoxy glue is required. Usually epoxy glue requires high temperature curing (at about 80-100 °C). The preparation of the surface where the strain gauge is to be glued is of the utmost importance. The surface must be smoothed (e.g. with very fine sand paper), deoiled with solvents, the solvent traces must then be removed and the strain gauge must be glued immediately after this to avoid oxidation or pollution of the prepared area. If these steps are not followed the strain gauge binding to the surface may be unreliable and unpredictable measurement errors may be generated.

Strain gauge based technology is used commonly in the manufacture of pressure sensors. The gauges used in pressure sensors themselves are commonly made from silicon, polysilicon, metal film, thick film, and bonded foil.

Most strain gauges are made from a constantan alloy.[4] Various constantan alloys and Karma alloys have been designed so that the temperature effects on the resistance of the strain gauge itself largely cancel out the resistance change of the gauge due to the thermal expansion of the object under test. Because different materials have different amounts of thermal expansion, self-temperature compensation (STC) requires selecting a particular alloy matched to the material of the object under test.

Every material reacts when it heats up or when it cools down. This will cause strain gauges to register a deformation in the material which will make it change signal. To prevent this from happening strain gauges are made so they will compensate this change due to temperature. Dependent on the material of the surface where the strain gauge is assembled on, a different expansion can be measured.

Temperature effects on the lead wires can be cancelled by using a "3-wire bridge" or a "4-wire ohm circuit"[7] (also called a "4-wire Kelvin connection").

Structural health monitoring (SHM) is used to monitor structures after their completion. To prevent failures, strain gauges are used to detect and locate damages and creep. A specific example is the monitoring of bridge cables increasing safety by detecting possible damages. Also, the bridge's behavior to unusual loads can be analyzed such as special heavy-duty transports.

Measuring the strain of skin can provide a multitude of biomechanic measurements such as posture, joint rotation, respiration and swelling both in humans and other animals. Resistive foil strain gauges are seldom used for these applications, however, due to their low strain limit. Instead, soft and deformable strain gauges are often attached to a host garment, to make it simple to apply the sensor to the correct part of the body, though sometimes they are attached directly to the skin. Typically in these applications, such soft strain gauges [1] are known as stretch sensors. For medical use, the sensors must be accurate and repeatable which typically requires the use of capacitive stretch sensors.

Many objects and materials in industrial applications have a finite life. To improve their lifetime and cost of ownership, predictive maintenance principles are used. Strain gauges can be used to monitor the strain as an indicator of fatigue in materials to enable software systems to predict when certain components need to be replaced or serviced. Resistive foil gauges can be used to instrument stiff materials like metals, ceramics, composites and similar, whereas highly elastic strain gauges are used to monitor softer materials such as rubber, plastics, textiles and the like. [2]

There are also applications where it isn't first obvious that you would measure strain to get to the wanted result. So for example in the detection of intruders on certain structures, strain gauges can be used to detect the presence of such an intruder. This is done by measuring the slight change in strain of the said structure.[9]

In some applications, strain gauges add mass and damping to the vibration profiles of the hardware they are intended to measure. In the turbomachinery industry, one used alternative to strain gauge technology in the measurement of vibrations on rotating hardware is the non-intrusive stress measurement system, which allows measurement of blade vibrations without any blade or disc-mounted hardware...

The following different kind of strain gauges are available in the market:

Strain Gauge measurement devices are prone to drift problems. Additionally, their manufacturing requires precise requirements during all the production steps. So there are multiple different ways of also measuring strain.[2]

Strain can also be measured using digital image correlation (DIC). With this technique one or two cameras are used in conjunction with a DIC software to track features on the surface of components to detect small motion. The full strain map of the tested sample can be calculated, providing similar display as a finite-element analysis. This technique is used in many industries to replace traditional strain gauges or other sensors like extensometers, string pots, LVDT, accelerometers.[16].. The accuracy of commercially available DIC software typically ranges around 1/100 to 1/30 of a pixels for displacements measurements which result in strain sensitivity between 20 and 100 μm/m.[17] The DIC technique allows to quickly measure shape, displacements and strain non-contact, avoiding some issues of traditional contacting methods, especially with impacts, high strain, high-temperature or high cycle fatigue testing.[18]

Nowadays there are many producers in the field of strain measuring. They produce strain gauges for diverse mounting surfaces, sizes, and shapes. For untrained personnel, the correct implementation and the choice of the appropriate type of measurement tool are very difficult. Furthermore, one needs the know-how on the precise setup process strain gauges to ensure the collection of viable data. The big providers of strain gauges offer advice on the correct choice given the application case. Additionally, they have training programs for their customers to ensure correct implementation.

One of the leading companies is Zemic Europe. They offer thousands of different types of strain gauges.[19]

Another worldwide leading actor in this field is HBM (Hottinger Baldwin Messtechnik GmbH). They also offer a wide variety of strain gauges and everything one could think of that relates to strain gauges (glue, do-it-yourself mounting guides, cabling guides, and more). HBM provides online instructions concerning the mounting of their products on their website.[20]

In 1995  Prof. Dr.-Ing. Stefan Keil published the first edition of a very detailed book about strain gauges and how to use them in applications called “Dehnungsmessstreifen”. Even though this first edition was only published in German it also became popular outside of Germany, because of the wide range of usages of strain gauges in many different fields. So after more than 20 years (in 2017), he published a second edition that was translated into English and so more open to the vast community of engineers that need to use strain gauges. This recent book has the title “Technology and Practical Use of Strain Gages”.[2]

The term “strain gauge” can be encountered in sociology. The social strain gauge theory is an approach to understanding accusations of witchcraft and sorcery. An anthropologist by the name of Marwick studied these sociological phenomenons in Zambia and Malawi in 1965.[21] Accusations of witchcraft reflect strain on relationships and or the whole social structure. The theory says that the sorcery accusations were a pressure valve of society.[22]