This article needs additional citations for verification. Please help improve this article by adding citations to reliable sources. Unsourced material may be challenged and removed.Find sources: "Stuttgart S-Bahn" – news · newspapers · books · scholar · JSTOR (April 2018) (Learn how and when to remove this template message)

The Stuttgart S-Bahn is a suburban railway system (S-Bahn) serving the Stuttgart Region, an urban agglomeration of around 2.7 million people, consisting of the city of Stuttgart and the adjacent districts of Esslingen, Böblingen, Ludwigsburg and Rems-Murr-Kreis.

The Stuttgart S-Bahn comprises seven lines numbered S1 through S6 and S60, and is operated by S-Bahn Stuttgart, a subsidiary of Deutsche Bahn. The system is integrated with the regional transport cooperative, the Verkehrs- und Tarifverbund Stuttgart (VVS), which coordinates tickets and fares among all transport operators in the metropolitan area.

All lines lead through the city centre of Stuttgart. The northeastern end of the tunnel (from the tracks near Stuttgart Hauptbahnhof through Schwabstraße) was the first part of the tunnel to open and has been used since the beginning, the southwestern end from Schwabstraße through Universität since 1985.

The Stuttgart S-Bahn has a "memory schedule" or clock-face schedule. The basic cycle is one train per hour and line (which is only used early in the morning and late in the evening). During the day, there are usually additional trains which increases the cycle for each line to every 30 minutes (outside of rush hour) or 15 minutes (rush hour). Beginning at Schwabstraße and heading towards Hauptbahnhof, the schedule is as follows:

If there are additional trains, these times repeat at 15- or 30-minute intervals (which means that during rush hour the S4 will depart on e.g. 07:03 AM, 07:18 AM, 07:33 AM and 07:48 AM). Some additional trains do not travel the full length of the track, e.g. there are some trains of line S1 that shuttle between Esslingen and Schwabstraße or Plochingen and Schwabstraße instead of continuing through to Kirchheim u. Teck.

The first steps toward an S-Bahn in Stuttgart began after World War II. With the Stuttgart Central Station moved to its current location in the 1920s, the focus was shifted to construction of a downtown railway tunnel to improve access to the central city and points south. Simultaneously, the Stuttgart streetcar company was embarking on plans to build tunnels downtown for their system. Additionally, extra tracks were added to several outlying rail corridors in preparation for eventual S-Bahn service.

After financing agreements between the city, state and federal government and the state railway Deutsche Bundesbahn were reached, construction on the downtown tunnel from Stuttgart Central Station to Schwabstraße began on July 5, 1971. Work was completed in September 1978 and operation of the Stuttgart S-Bahn began with three lines (all beginning at Schwabstraße station): the S1 to Plochingen via Esslingen, the S4 to Ludwigsburg and the S6 to Weil der Stadt via Feuerbach and Leonberg.

Over the following years, the network has been extended to Bietigheim, Backnang and Schorndorf (1981) and the southern branches to Böblingen (1985), Herrenberg (1992) and Airport (1993). The S2 was then extended beyond the airport, connecting Filderstadt with the network.

The latest changes are the addition of Kirchheim unter Teck to the end of the S1 and the construction of a first tangential line S60 from Böblingen to Maichingen, Renningen and Schwabstraße (S6) and the extension of line S4 to Backnang.

The 215 km long system has 83 stations and serves approximately 435,000 passengers every workday. The trains operate on the standard gauge tracks of the Deutsche Bahn AG (DBAG) and are powered by single phase AC at 15 kV and 16.67 hertz, taken from overhead wires.

Installation of new passenger information systems began in December 2004. These systems indicate the actual real-time status for the next three trains rather than just the scheduled departure time and route of the next train. 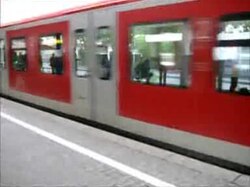 All seven S-Bahn lines travel under the downtown area to Schwabstraße, and three continue on to Vaihingen through a dual-track tunnel. This tunnel (Verbindungsbahn, however, presents a bottleneck that limits train headways to two and a half minutes, meaning that trains on each individual line can only run at 15-minute headways.

At first, the shortest headway (the time between vehicle arrivals at a given point) on each line was 20 minutes. Headways were subsequently improved on the S1 between Schwabstraße and Esslingen and on the S6 between Schwabstraße and Leonberg to 10 minutes. Beginning in 1996, 15-minute headways during rush hours were introduced on all lines. This was accomplished with supplemental trains and operational changes along the outlying segments. This allowed the overall headway on the central trunk section to remain at 2.5 minutes.

All lines currently converge in the central trunk section of the track. This results in steady headways to Rohr, Waiblingen, and Ludwigsburg. The section from Vaihingen to Bad Cannstatt and Zuffenhausen has an optimal 10-minute headway during the day.

As early as 2015, introducing ETCS on the core section has been considered.[1] In early 2017, Verband Region Stuttgart (VRS), the state of Baden-Württemberg and DB Netz announced to spend a million Euros on a feasibility study on ETCS for S-Bahn Stuttgart.[2] After a Request for tender, four offers were received and the contract concluded in October 2017.[3] ETCS proved to be technically feasible and useful to recude headways.[4] The final report, published in early 2019, concluded that headways in the central core section of the network could be reduced by some 20 percent.[5]

On January 30th, 2019, the regional parliament enacted a package of measures. Based on the introduction of ETCS, the train operating contract was extended to mid 2032 and 56 further S-Bahn trainsets were to be purchased.[6]

As of July 7, 2005, the fleet consisted of ninety Class 420 train sets and sixty Class 423 sets. The Class 423 trains ply the S1 and S3 lines, while the 420s are in use along the other lines. Maintenance of the trains and power units takes place in the S-Bahn service yard at the original eastern terminus of line S1 in Plochingen. This yard is equipped with the latest wheel lathes and washing and graffiti-cleaning equipment. About 550 employees working in three shifts keep the S-Bahn in service. On May 5, 2009, Bombardier and Alstom announced they received an order for 83 Class 430 train sets (including an option for another 83 sets) to replace the Class 420 from 2012 on.[8]

The deployment of the Class 430 trains was delayed in July 2013 after several failures of the doors and retractable steps. These problems, along with unrelated signal failures, resulted in widespread delays on the S-Bahn system, especially on the S1, S2, and S3 lines.[9] It was decided that the retractable step feature would be disabled and Class 430 trains will be gradually introduced beginning on December 15, 2013.[10] By April 2014, 36 of the 430 train sets were in service with the S1 line completely converted.[11]

The following expansions of the Stuttgart S-Bahn system are currently in planning or underway:

Additional projects not in active planning at present: