A map showing the triangles and transects used in the Great Trigonometrical Survey (1802-1852), produced in 1870. 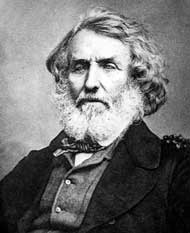 Surveyor-General of India George Everest (b.1790-d.1866) under whom GTS was completed and Mount Everest was named in his honour.

The Survey of India is India's central engineering agency in charge of mapping and surveying.[3] Set up in 1767[4] to help consolidate the territories of the British East India Company, it is one of the oldest Engineering Departments of the Government of India. Its members are from Survey of India Service cadre of Civil Services of India and Army Officers from the Indian Army Corps of Engineers. It is headed by the Surveyor General of India. At present, Survey of India is headed by Naveen Tomar.

The history of the Survey of India dates back to the 18th century.[5] "First modern scientific survey of India" was undertaken by W. Mather in 1793–96 on instructions of Superintendent of Salem and Baramahal, Col. Alexander Read. The present Dharmapuri district, Krishnagiri district and North Arcot in western Tamil Nadu were then called Baramahal.[6]

Great Trigonometrical Survey (1802–1852) was started by British surveyor Col. William Lambton on 10 April 1802 from St. Thomas Mount in Chennai to foothills of Himalayas. 36 inch huge half ton weight Theodolite was used, which took 57 days to measure the 12-km base line. This 5-decade project was completed under Survey General Lt. George Everest in the year 1852. Pioneering mathematician and Surveyor Radhanath Sikdar measured Mount Everest in 1852, with a height of 29,002 feet. Modern measurements indicate the height is 29,037 feet. This is regarded as the beginning of a new age of systematic topographical mapping in India succeeding the classical age, and the founding of one of the oldest survey and mapping agencies in the world.

The Survey of India, headquartered at Dehradun, Uttarakhand has 18 Geo Spatial divisions ranging from the prediction of tides to aerial survey. It has 23 Geo-spatial Data Centers spread across India, each catering to the respective administrative area. Surveyors are the back bone of Survey of India. Appointments to Group 'A' Civil Stream posts in the Junior Time Scale (Dy Supdtg Surveyor) in Survey of India are made on the basis of competitive Indian Engineering Services examination conducted by the Union Public Service Commission and also through permanent secondment of Army Officers Defence Stream by the Union Public Service Commission. The important posts/ grades in Survey of India are in the following order of seniority: Draftsman, Plane Tabler, Survey Assistant, Surveyor, Officer Surveyor, Deputy Superintending Surveyor, Superintending Surveyor, Superintending Surveyor (Non-Functional Second Grade)/Deputy Director, Director/Deputy Surveyor General, Additional Surveyor General, Surveyor General.

Survey of India publishes maps and the unrestricted category maps can be obtained at very affordable prices from its several Geo-spatial data centers. Restricted category maps require due approval from government authorities. Many other rules govern the sale and use of Survey of India maps. Only an Indian citizen may purchase topographic maps and these may not be exported from India for any reason.[7] On 15 February 2021, the Government of India announced changes to the country's mapping policy which frees up lot of earlier restrictions related to mapping.[8] A list of restrictions proposed is published by DST for comments by 30 July 2021.[9]