SMIL 2.0 became a W3C Recommendation on 9 August 2001.[6] SMIL 2.0 introduced a modular language structure that facilitated integration of SMIL semantics into other XML-based languages. Basic animation and timing modules were integrated into Scalable Vector Graphics (SVG) and the SMIL modules formed a basis for Timed-Text. The modular structure made it possible to define the standard SMIL language profile and the XHTML+SMIL language profile with common syntax and standard semantics.

SMIL 2.1 became a W3C Recommendation on 13 December 2005.[3][7] n SMIL 2.1 includes a small number of extensions based on practical experience gathered using SMIL in the Multimedia Messaging System on mobile phones.

Authoring and rendering tools for smilText and SMIL 3.0 PanZoom functionality:

A SMIL document is similar in structure to an HTML document in that they are typically divided between an optional <head> section and a required <body> section. The <head> section contains layout and metadata information. The <body> section contains the timing information, and is generally composed of combinations of three main tags—sequential ("<seq>", simple playlists), parallel ("<par>", multi-zone/multi-layer playback) and exclusive ("<excl>", event-triggered interrupts). SMIL refers to media objects by URLs, allowing them to be shared between presentations and stored on different servers for load balancing. The language can also associate different media objects with different bandwidth requirements.

Combination with other XML-based standards

Example of a non-interactive (but animated SVG with SMIL). The SVG file demonstrates animation of transformation and motion. 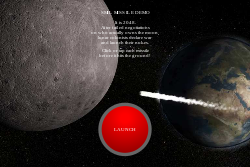 Example of an interactive SVG with SMIL demonstrating mouse events.

SMIL is one of three means by which SVG animation can be achieved (the others being JavaScript and CSS animations).

SMIL+RSS or other web syndication methods

While RSS and Atom are web syndication methods, with the former being more popular as a syndication method for podcasts, SMIL is potentially useful as a script or playlist that can tie sequential pieces of multimedia together and can then be syndicated through RSS or Atom.[11][12] In addition, the combination of multimedia-laden .smil files with RSS or Atom syndication would be useful for accessibility to audio-enabled podcasts by the deaf through Timed Text closed captions,[13] and can also turn multimedia into hypermedia that can be hyperlinked to other linkable audio and video multimedia.[14]

VoiceXML can be combined with SMIL to provide a sequential reading of several pre-provided pages or slides in a voice browser, while combining SMIL with MusicXML would allow for the creation of infinitely-recombinable sequences of music sheets. Combining SMIL+VoiceXML or SMIL+MusicXML with RSS or Atom could be useful in the creation of an audible pseudo-podcast with embedded hyperlinks, while combining SMIL+SVG with VoiceXML and/or MusicXML would be useful in the creation of an automatically audio-enabled vector graphics animation with embedded hyperlinks.

SMIL is anticipated for use within Text Encoding Initiative (TEI) documents.[15][16]

SMIL is being implemented on handheld and mobile devices and has also spawned [17] the Multimedia Messaging Service (MMS) which is a video and picture equivalent of Short Message Service (SMS).

SMIL is also one of the underlying technologies used for "Advanced Content" in the (discontinued) HD DVD format for adding interactive content (menus etc.).

The field of Digital Signage is embracing SMIL as a means of controlling dynamic advertising in public areas.[18][19]

Most commonly used web browsers have native support for SMIL, but it has not been implemented in Microsoft browsers. It was to be deprecated in Google Chrome,[20] but it has now been decided to suspend that intent until alternatives are sufficiently developed.[21] Other software that implement SMIL playback include:

Media player boxes based on dedicated 1080p decoder chips such as the Sigma Designs 8634 processor are getting SMIL players embedded in them.

A SMIL file must be embedded, then opened using a plug-in such as Apple's QuickTime or Microsoft's Windows Media Player, to be viewed by a browser that doesn't support SMIL.