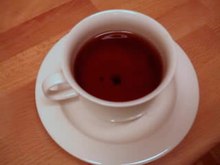 The tea leaves collect in the middle and the bottom, instead of along the rim. The blue line is the secondary flow that pushes the tea leaves to the middle of the bottom. Albert Einstein solved the paradox in 1926. Visualization of secondary flow in river bend model (A.Ya.Milovich, 1913,[1] flow from right to left). Near-bottom streamlines are marked with dye injected by a pipette.

The tea leaf paradox is a phenomenon where tea leaves in a cup of tea migrate to the center and bottom of the cup after being stirred rather than being forced to the edges of the cup, as would be expected in a spiral centrifuge. The correct physical explanation of the paradox was for the first time given by James Thomson in 1857. He correctly connected the appearance of secondary flow (both Earth atmosphere and tea cup) with ″friction on the bottom″.[2] The formation of secondary flows in an annular channel was theoretically treated by Boussinesq as early as in 1868.[3] The migration of near-bottom particles in river-bend flows was experimentally investigated by A. Ya. Milovich in 1913.[1] The solution first came from Albert Einstein in a 1926 paper in which he explained the erosion of river banks, and repudiated Baer's law.[4][5]

Stirring the liquid causes a spiral flow schema by centrifugal action. As such, the anticipation is that tea leaves would, because of their mass, move to the edge of the cup. However, friction between moving water and the cup increases water pressure, resulting in a high pressure boundary layer. This high pressure boundary layer extends inwards and even overcomes the inertia of the tea leaf's centrifugally actuated mass. Therefore it is friction, between the cup and the water, that produces a centripetal force upon the mass of tea leaves.

The high pressure boundary layer also effects the flow schematic which produces the familiar spiral pattern. The high pressure boundary layer - caused by the stirring - forces water outward and up the edge of the cup, where pressure increases. Then the water moves downward, inward and then upward, about the centre (see diagram). In this way, the flow schematic exerts an inward force that exceeds the mass of the tea leaves, and effectively contains their outward (centrifugal) tendency, and causes the observable (centripetal) paradox.

Concurrently, the circular movement of water (in the x-axis) is slower at the bottom of the cup than at the top, because the friction surface at the bottom is greater. While there is sufficient water velocity, this difference can 'twist' the moving body of water into such a spiral.

The phenomenon has been used to develop a new technique to separate red blood cells from blood plasma,[6][7] to understand atmospheric pressure systems,[8] and in the process of brewing beer to separate out coagulated trub in the whirlpool.[9]