TU Berlin is a member of TU9, an incorporated society of the largest and most notable German institutes of technology and of the Top International Managers in Engineering network,[14] which allows for student exchanges between leading engineering schools. It belongs to the Conference of European Schools for Advanced Engineering Education and Research.[15] The TU Berlin is home of two innovation centers designated by the European Institute of Innovation and Technology. The university is labeled as "The Entrepreneurial University" ("Die Gründerhochschule") by the Federal Ministry for Economic Affairs and Energy.[16][17]

The university is notable for having been the first to offer a degree in Industrial Engineering and Management (Wirtschaftsingenieurwesen). The university designed the degree in response to requests by industrialists for graduates with the technical and management training to run a company. First offered in winter term 1926/27, it is one of the oldest programmes of its kind.[18]

TU Berlin has one of the highest proportions of international students in Germany, almost 27% in 2019.[19]

In addition, TU Berlin is part of the Berlin University Alliance, has been conferred the title of "University of Excellence" under and receiving funding from the German Universities Excellence Initiative.[20]

The Bauakademie, founded in 1799, a forerunner of the Technische Universität Berlin

The reverse of this medal 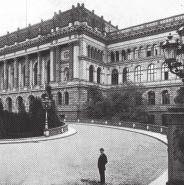 The Technische Hochschule in Charlottenburg, Berlin

In 1899, the Königlich Technische Hochschule zu Berlin was the first polytechnic in Germany to award doctorates, as a standard degree for the graduates, in addition to diplomas, thanks to professor Alois Riedler and Adolf Slaby, chairman of the Association of German Engineers (VDI) and the Association for Electrical, Electronic and Information Technologies (VDE).

In 1916 the long-standing Königliche Bergakademie zu Berlin, the Prussian mining academy created by the geologist Carl Abraham Gerhard in 1770 at the behest of King Frederick the Great, was incorporated into the Königlich Technische Hochschule as the "Department of Mining". Beforehand, the mining college had been, however, for several decades under the auspices of the Frederick William University (now Humboldt University of Berlin), before it was spun out again in 1860.

After Charlottenburg's absorption into Greater Berlin in 1920 and Germany being turned into Weimar Republic, the Königlich Technische Hochschule zu Berlin was renamed "Technische Hochschule zu Berlin" ("TH Berlin").[21] In 1927, the Department of Geodesy of the Agricultural College of Berlin was incorporated into the TH Berlin. During the 1930s, the redevelopment and expansion of the campus along the "East-West axis" were part of the Nazi plans of a Welthauptstadt Germania, including a new faculty of defense technology under General Karl Becker, built as a part of the greater academic town (Hochschulstadt) in the adjacent west-wise Grunewald forest. The shell construction remained unfinished after the outbreak of World War II and after Becker's suicide in 1940, it is today covered by the large-scale Teufelsberg dumping.

Main building of TU Berlin in 2010

The north section of the main building of the university was destroyed during a bombing raid in November 1943.[23] Due to the street fighting at the end of the Second World War, the operations at the TH Berlin were suspended as of 20 April 1945. Planning for the re-opening of the school began on 2 June 1945, once the acting rectorship led by Gustav Ludwig Hertz and Max Volmer was appointed. As both Hertz and Volmer remained in exile in the Soviet Union for some time to come, the college was not re-inaugurated until 9 April 1946, now bearing the name "Technische Universität Berlin".

Since 2009 the TU Berlin houses two Knowledge and Innovation Communities (KIC) designated by the European Institute of Innovation and Technology.[24]

The official policy of the university is that only the German name, Technische Universität Berlin (TU Berlin), should be used abroad in order to promote corporate identity and that its name is not to be translated into English.[25][26].

The TU Berlin covers 604,000 m², distributed over various locations in Berlin. The main campus is located in the borough of Charlottenburg-Wilmersdorf. The seven schools of the university have some 33,933 students enrolled in 90 subjects (October 2015).[27]

From 2012 to 2022, TU Berlin operated a satellite campus in Egypt, the El Gouna campus, to act as a scientific and academic field office. The nonprofit public–private partnership (PPP) aimed to offer services provided by Technische Universität Berlin at the campus in El Gouna on the Red Sea.[28]

Telefunken-Highrise, the tallest building on campus

Since 2002,[21] the TU Berlin has consisted of the following faculties and institutes:[31]

International student mobility is available through the ERASMUS programme or through the Top Industrial Managers for Europe (TIME) network. The new common main library of Technische Universität Berlin and of the Berlin University of the Arts was opened in 2004[40] and holds about 2.9 million volumes (2007).[41] The library building was sponsored partially (estimated 10% of the building costs) by Volkswagen and is named officially "University Library of the TU Berlin and UdK (in the Volkswagen building)".[42] A source of confusion to many, the letters above the main entrance only state "Volkswagen Bibliothek" (German for "Volkswagen Library") – without any mentioning of the universities.

Some of the former 17 libraries of Technische Universität Berlin and of the nearby University of the Arts were merged into the new library, but several departments still retain libraries of their own. In particular, the school of 'Economics and Management' maintains a library with 340,000 volumes in the university's main building (Die Bibliothek – Wirtschaft & Management/″The Library″ – Economics and Management) and the 'Department of Mathematics' maintains a library with 60,000 volumes in the Mathematics building (Mathematische Fachbibliothek/"Mathematics Library"). (Including those of the Academies mentioned under History)

Measured by the number of top managers in the German economy, TU Berlin ranked 11th in 2019.[47]

According to the research report of the German Research Foundation (DFG) from 2018, TU Berlin ranks 24th absolute among German universities across all scientific disciplines. Thereby TU Berlin ranks 9th absolute in natural sciences and engineering. The TU Berlin took 14th place absolute in computer science and 5th place absolute in electrical engineering.[48] In a competitive selection process, the DFG selects the best research projects from researchers at universities and research institutes and finances them. The ranking is thus regarded as an indicator of the quality of research.[49]

In the 2017 Times Higher Education World University Rankings, globally the TU Berlin ranks 82nd overall (7th in Germany), 40th in the field of Engineering & Technology (3rd in Germany) and 36th in Computer science discipline (4th in Germany), making it one of the top 100 universities worldwide in all three measures.[50]

As of 2016, TU Berlin is ranked 164th overall and 35th in the field of Engineering & Technology according to the British QS World University Rankings. It is one of Germany's highest ranked universities in statistics and operations research and in Mathematics according to QS.[51]