The Age of Innocence is a 1993 American historical romantic drama film directed by Martin Scorsese. The screenplay, an adaptation of the 1920 novel The Age of Innocence by Edith Wharton, was written by Scorsese and Jay Cocks. The film stars Daniel Day-Lewis, Michelle Pfeiffer, Winona Ryder and Miriam Margolyes, and was released by Columbia Pictures. The film recounts the courtship and marriage of Newland Archer (Day-Lewis), a wealthy New York society attorney, to May Welland (Ryder); Archer then encounters and legally represents Countess Olenska (Pfeiffer) prior to unexpected romantic entanglements.

The Age of Innocence was released theatrically on October 1, 1993 by Columbia Pictures. It received critical acclaim, winning the Academy Award for Best Costume Design, and being nominated for Best Actress in a Supporting Role (Winona Ryder), Best Adapted Screenplay, Best Original Score and Best Art Direction.[3] Miriam Margolyes won the Best Supporting Actress BAFTA in 1994. The film grossed $68 million against a $34 million budget. Scorsese dedicated the film to his father, Luciano Charles Scorsese, who had died the month before the film was released. Luciano and his wife, Catherine Scorsese, had small cameo appearances in the film.

In 1870s New York City, gentleman lawyer Newland Archer is planning to marry the respectable young May Welland. May's cousin, the American heiress Countess Ellen Olenska, has returned to New York after a disastrous marriage to a dissolute Polish Count. At first she is ostracized by society and vicious rumors are spread, but, as May's family boldly stands by the countess, she is gradually accepted by the very finest of New York's old families.

The countess is snubbed at one social party arranged by her family, but with the help of Archer, she is able to make a comeback at an event being hosted by the wealthy Van der Luydens. There she makes the acquaintance of one of New York's established financiers, Julius Beaufort, who has a reputation for risky affairs and dissipated habits. He begins to openly flirt with the countess both in public and in private. Archer prematurely announces his engagement to May, but as he comes to know the countess, he begins to appreciate her unconventional views on New York society and he becomes increasingly disillusioned with his new fiancée May and her innocence, lack of personal opinion, and sense of self.

After the countess announces her intention of divorcing her husband, Archer supports her desire for freedom, but he feels compelled to act on behalf of the family and persuade the countess to remain married. When Archer realizes that he has unwittingly been falling in love with the countess, he abruptly leaves the next day to be reunited with May and her parents, who are in St. Augustine, FL on vacation. Archer asks May to shorten their engagement, but May becomes suspicious and asks him if his hurry to get married is prompted by the fear that he is marrying the wrong person. Archer reassures May that he is in love with her. When back in New York, Archer calls on the countess and admits that he is in love with her, but a telegram arrives from May announcing that her parents have pushed forward the wedding date.

After their wedding and honeymoon, Archer and May settle down to married life in New York. Over time, Archer's memory of the countess fades.

When the countess returns to New York to care for her grandmother, she and Archer resume their friendship and then admit their love for each other. They arrange to meet secretly to consummate their relationship, but before the liaison can occur, the countess suddenly announces her intention to return to Europe.

Two weeks later, May throws a farewell party for the countess. After the guests leave, May tells Archer that she is pregnant and admits that she told the countess this news two weeks earlier despite not being sure of it at the time (the implication being that May suspected Newland’s affair of the heart and told Ellen specifically to push her into returning to Europe instead of pursuing Archer).

The years pass: Archer is 57 and has been a dutiful, loving father and faithful husband. The Archers had four children. May died of infectious pneumonia and Archer mourned her in earnest. Archer's engaged son, Ted, persuades him to travel to Paris. Ted has arranged for them to visit Countess Olenska there. Archer has not seen her in over 25 years. Ted confides to his father that May had confessed on her deathbed that "... she knew we were safe with you, and always would be. Because once, when she asked you to, you gave up the thing you wanted most." Archer responds, "She never asked me." That evening outside the countess' apartment, Archer sends his son alone to visit her. Sitting outside in the courtyard, he recollects their time together and slowly walks off.

Scorsese's parents, the actors Charles and Catherine Scorsese, have a small cameo appearance during the sequence in which Archer meets the countess at the Pennsylvania Terminus in Jersey City.[4] Scorsese himself has a cameo as the "fussy bustling photographer who later takes the official wedding photographs",[5] while Day-Lewis' sister, Tamasin Day-Lewis, has a cameo admiring May's engagement ring.[5]

A room in the Paine Mansion—which is now a fraternity house belonging to the Alpha Tau chapter of Pi Kappa Phi at Rensselaer Polytechnic Institute—staged as the dining room for the film. 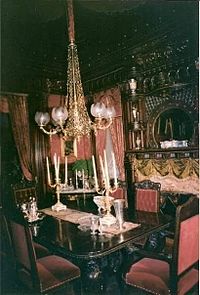 The Moorish Room, staged as a dining room 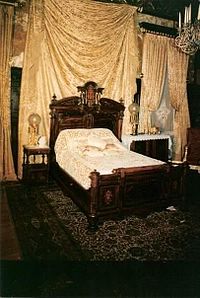 The mansion's dining room staged as a bedroom

The Age of Innocence was filmed on location primarily in Troy, New York.[6] The opera scenes were filmed at the Philadelphia Academy of Music in Philadelphia, Pennsylvania. The scenes set in the home of Mrs. Mingott were filmed in "The Castle", a fraternity house belonging to the Alpha Tau chapter of Pi Kappa Phi at Rensselaer Polytechnic Institute. Formerly known as the Paine Mansion, after its completion in 1896 (then-estimated to cost $500,000), it was heralded as the grandest house in all of Troy.[7][8] The scenes depicting the country house in snow were filmed inside the circa 1737 Dutch-colonial Luykas Van Alen House, in Kinderhook, New York.[6] Only one major set was built, for an ornate ballroom sequence at the Beaufort residence.[9] The triangular Victorian Gothic Rice Building was used as the setting for the law office.[10]

Scorsese's friend and screenwriter Jay Cocks gave him the Wharton novel in 1980, suggesting that this should be the romantic piece Scorsese should film, as Cocks felt it best represented his sensibility. In Scorsese on Scorsese he noted that

Although the film deals with New York aristocracy and a period of New York history that has been neglected, and although it deals with code and ritual, and with love that's not unrequited but unconsummated—which pretty much covers all the themes I usually deal with—when I read the book, I didn't say, "Oh good, all those themes are here."[11]

The film's title sequence was created by Elaine and Saul Bass. Bass, himself, noted that the titles were highly ambiguous and metaphoric, and the result of his fascination with time-lapse photography. The sequences' visual symphony of blooming roses and lace were to convey the submerged sensuality and hidden codes of the era.[12] The famous paintings featured in the film were newly created high-quality reproductions.[13] The bursts of color employed as a fade out were inspired by the films Black Narcissus (1947), by Michael Powell, and Rear Window (1954), by Alfred Hitchcock.[14]

On review-aggregator website Rotten Tomatoes, the film holds an approval rating of 87% based on 60 reviews, and an average rating of 7.40/10. The site's consensus states: "Equal measures romantic and wistful, Martin Scorsese's elegant adaptation of The Age of Innocence is a triumphant exercise in both stylistic and thematic restraint."[15] On Metacritic, the film has a weighted average score of 90 out of 100, based on 35 critics, indicating "universal acclaim".[16] Audiences polled by CinemaScore gave the film an average grade of "B+" on an A+ to F scale.[17]

Taking The Age of Innocence, Edith Wharton's sad and elegantly funny novel about New York's highest society in the 1870s, Martin Scorsese has made a gorgeously uncharacteristic Scorsese film...The film is the work of one of America's handful of master craftsmen.[19]

The story told here is brutal and bloody, the story of a man's passion crushed, his heart defeated. Yet it is also much more, and the last scene of the film, which pulls everything together, is almost unbearably poignant.[20]

He then added the film to his "Great Movies" collection, and defined the film as "one of Scorsese's greatest films".[21] Peter Travers in Rolling Stone wrote:

A superlative cast catches Wharton's urgency. Ryder, at her loveliest, finds the guile in the girlish May – she'll use any ruse that will help her hold on to Archer. Day-Lewis is smashing as the man caught between his emotions and the social ethic. Not since Olivier in Wuthering Heights has an actor matched piercing intelligence with such imposing good looks and physical grace. Pfeiffer gives the performance of a lifetime as the outcast countess.[22]

There's an alert, thinking presence behind the camera. And, in front of the camera, performers Daniel Day-Lewis, Michelle Pfeiffer and Winona Ryder suffuse this saga of repressed longing and spiritual suffering with elegant authority.... Known primarily for modern street pictures, such as Taxi Driver and GoodFellas, Scorsese shows he can flex an entirely different set of muscles and still make a great movie.[23]

For sophisticated viewers with a taste for literary adaptations and visits to the past, there is a great deal here to savor....Day-Lewis cuts an impressive figure as Newland... The two principal female roles are superbly filled.... Scorsese brings great energy to what could have been a very static story, although his style is more restrained and less elaborate than usual.[24]

Perhaps it shouldn't come as such a grand surprise that he [Martin Scorsese] is as deft at exploring the nuances of Edwardian manners as he is the laws of modern-day machismo.[25]

The performances are excellent, while the director employs all the tools of his trade to bring his characters and situations vividly to life... Scorsese's most poignantly moving film.[26]

But not all the critics had positive remarks. Marc Savlov in the Austin Chronicle wrote:

At two hours and 13 minutes, Scorsese has allowed himself enough time to follow Wharton's book to the letter, and also enough time to include long stretches of painfully wearisome society functions and banter. As a period piece, it's a joy to behold, but with such an indecisive little newt of a protagonist, it's just hard to give a damn what happens.[27]

At the British Academy Film Awards (BAFTAs), The Age of Innocence won the BAFTA Award for Best Actress in a Supporting Role (Miriam Margolyes). The film received another nomination in this category, for Winona Ryder, and was also nominated for the awards for Best Cinematography (Michael Ballhaus) and Best Production Design (Dante Ferretti).

In addition to his Academy Award and Golden Globe Award nominations, Martin Scorsese won the National Board of Review Award for Best Director and the Elvira Notari Prize at the Venice Film Festival (shared with Michelle Pfeiffer), as well as a nomination for the Directors Guild of America Award for Outstanding Directing - Feature Film.

Elmer Bernstein was nominated for the Grammy Award for Best Instrumental Composition Written for a Motion Picture or Television.[28]

The film score for The Age of Innocence was composed by Elmer Bernstein, who had previously collaborated with Scorsese on Cape Fear (1991).

The film starts with a duet scene of the opera "Faust" from Charles Gounod.[29]