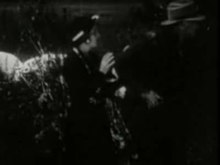 The Hurricane Express, Chapter 1: The Wrecker

The L & R Railroad is in competition with an airline for lucrative transport contracts. When the "Hurricane Express" is sabotaged and involved in a train wreck, one of his victims is Larry Baker's father, Jim (J. Farrell MacDonald). A mysterious figure, known as "the Wrecker" is responsible for the train crashes. Air Transport Company pilot Baker (John Wayne), wants to find the Wrecker, but, among a host of suspects, it will be difficult since the murderer can disguise himself to look like almost anyone.[3]

One of the main suspects in the train crashes is Walter Gray (Lloyd Whitlock), the airline manager and Larry's boss, who stands to gain if the L & R Railroad loose contracts. Suspicion is also cast on Tom Jordan (Matthew Betz), a recently discharged and disgruntled railroad engineer. Another possibility is that Frank Stratton (Edmund Breese), an escaped convict who had wrongfully been convicted, may be the Wrecker. Complicating matters is that Gloria Stratton (Shirley Grey) is Frank Stratton's daughter, and Larry is in love with her.

Gloria tries to help Larry find the villains behind the train crashes, and when the "Hurricane Express" is again ready to go back into service, the pair are in air, flying as an escort to the speeding train. With a full load of gold, the train is a tempting target for the Wrecker.

The continuing attacks on the L & R Railroad put Gloria and Larry in danger, but they are determined to bring the Wrecker and his gang to justice. Finally, the young pilot is able to capture the murderers and with Gloria, is able to look forward to a happy future together.

During the 1930s, after starring in The Big Trail (1930), its subsequent commercial failure meant that Wayne was relegated to minor roles in A-pictures, or starring, with his name over the title, in many low-budget Poverty Row Westerns, mostly at Monogram Pictures and serials for Mascot Pictures Corporation, such as The Hurricane Express. [5][N 1]

The Hurricane Express was cheaply staged and relied heavily on studio sets for interior sequences. Two elements, however, were critical, the use of a train and an aircraft. Airline pilot Larry Baker flies as the co-pilot on a Trans World Airlines Ford Trimotor (c/n NC8411).[7] The aircraft flew from the Grand Central Airport in Glendale, California, a favourite locale for Hollywood films featuring aviation.[8]

While the Ford Trimotor appears in the first two chapters, the Curtiss "Jenny" is used in an aircraft-to-train transfer (a favourite stunt in the 1920s was a transfer from aircraft to aircraft, or other moving vehicles). A Fokker Trimotor also appears. [9]

Although concentrating on the aviation aspects of the production, aviation film historian James M. Farmer in Celluloid Wings: The Impact of Movies on Aviation (1984), characterized The Hurricane Express as a lightweight formula melodrama.[9]

Like many other serials, after the conclusion of the serial, The Hurricane Express was re-edited into a feature film version which eliminated approximately two-thirds of the original serial footage. Almost no footage from the middle chapters of the serial were used. Although one of the "poverty row" studios, Mascot was important to Wayne's career and he went on to make two more serials for the studio. In The Hurricane Express, Wayne does most of his own stunt work, which solidified him as a bona fide action star.[10]