The Royle Family is a British sitcom produced by Granada Television for the BBC, which ran for three series from 1998 to 2000, and specials from 2006 to 2012.[1][2] It centres on the lives of a television-fixated Manchester family, the Royles, comprising family patriarch Jim Royle (Ricky Tomlinson), his wife Barbara (Sue Johnston), their daughter Denise (Caroline Aherne), their son Antony (Ralf Little) and Denise's fiancé (later husband) David (Craig Cash).

The series features simple production values and a comic portrayal of working-class family life at the turn of the millennium. It therefore has something in common with kitchen sink drama. Almost all of the episodes take place in the Royles' home, largely in the telly-centric living room, with the humour derived from the conversations held therein. Aherne and Cash co-wrote every episode, along with Henry Normal (series one), Carmel Morgan (series two), and Phil Mealey (five Christmas specials). The later specials are presented in a more traditional sitcom format. A sixth special episode was set to be written, but Aherne died on 2 July 2016, effectively ending the programme.

In the British Film Institute's list of the 100 greatest British television programmes drawn up in 2000 and voted on by industry professionals, The Royle Family was placed 31st. In a 2001 Channel 4 poll, Jim Royle, the misanthropic head of the household known for such mocking phrases as "my arse!", was ranked eleventh on their list of the 100 Greatest TV Characters.[3] In a 2004 BBC poll to find Britain's Best Sitcom, The Royle Family was placed 19th. The series has also won several BAFTA awards.

Most episodes appear to take place in real time and all action takes place within the Royles' council house home. (The passage of time as indicated by the changing programmes on the Royles' TV sometimes suggests that the action has been compressed.)

Unlike most UK sitcoms of the time, the show was filmed in 16 mm film using single camera production style and was not filmed in front of an audience. The producer Glenn Wilhide is on record as saying, "It was a big fight to make sure it had no laugh track".[4]

The one-off specials take a more traditional sitcom storyline, though many scenes still run longer than standard in line with the 'real time' nature of the original series. The 2006 special episode "The Queen of Sheba" was partly set in a hospital. Its narrative moves forward in time in a more structured manner. 2008's Christmas special, "The New Sofa", is set over two days. In it the characters spend Christmas Eve at the Royle household in the traditional manner (in front of the television), followed by Christmas Day at Dave and Denise's. Much of the 2009 Christmas special takes place in a caravan at a holiday park. It also features intermediate scenes of Dave driving the car there. All of the 2010 and 2012 Christmas specials takes place at the Royles' house. There was widespread speculation as to whether the show would return after the 2012 special. In 2016, Tomlinson said that there would probably be a Christmas special that year; however, Aherne's death in July 2016 effectively ended any chances of a return for the show.[5]

The show's theme song is "Half the World Away" by Oasis. When Aherne died, ex-Oasis member Noel Gallagher performed a tribute to Aherne by playing it during a concert in Nashville, Tennessee.[6] 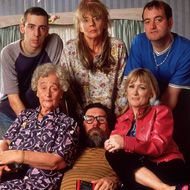 The first series aired on BBC Two in 1998, quickly gaining a following such that it was moved to BBC One for the second series in 1999, when it became even more popular. A Christmas special aired in 1999, followed by a third series and another Christmas special in 2000. Whilst each of the episodes can be viewed independently of each other, the first three series each have their own story arc running through them to give a greater sense of continuity, again unique for a British sitcom of this era. In series one the focus is on the buildup to Dave and Denise's wedding day, in the second series it partly focuses on Denise's pregnancy culminating in her giving birth on Christmas Day in the Christmas special. The third series builds up to Baby David's Christening as well as the relationship between Antony and Emma. Certain episodes also appear to parallel each other if the first three series are watched in order- for example the fifth episode of the first season focuses on a row between Dave and Denise whilst the fifth episode of the second season focuses on a row between Jim and Barbara.

After Aherne announced that she would not write or star in any more episodes, Ricky Tomlinson also pulled out to ensure the show's end. However, on 7 April 2006, the BBC announced that Caroline Aherne and Craig Cash were to write a script for a one-off special, which was broadcast on 29 October 2006.[7] The episode received widespread critical acclaim, having been watched by over 8,000,000 viewers.[8]

"The Queen of Sheba" takes place six years after the events of the last series and features Nana's declining health and death. It won the "Best Sitcom" award at the 2007 BAFTAs, and won the Royal Television Society award for "Best Situation Comedy & Comedy Drama". Liz Smith's performance won her the "Best TV Comedy Actress" award at the National Television Awards and was BAFTA nominated.

The 2008 Christmas special, entitled "The New Sofa" was the first that took place mainly outside of the Royles' house. It began at the Royles', but moved to the Bests' house early on.[9] Ralf Little did not appear in this episode, but his character is referenced. The hour-long special aired on Christmas Day 2008, and attracted 10,600,000 viewers, making it the fifth most watched programme on Christmas Day and the fifth most watched for the entire week ending 28 December 2008.[8]

The Royle Family returned as part of Comic Relief, on 13 March 2009. It also marked the return of Ralf Little as Antony, who joined Dave, Denise, Jim and Barbara in the one-off mini episode.[10]

Another Christmas special, "The Golden Egg Cup", was aired on 25 December 2009, at 9:00 pm on BBC One and also in HD on the BBC HD channel.[11] The episode was the most watched show on TV on Christmas Day and for the entire week ending 26 December 2009, attracting an audience of 11,740,000 viewers and the highest-rated episode of The Royle Family.[8]

In November 2010 Gold broadcast a two-hour episode called "Behind The Sofa", with interviews from the cast and crew celebrating the show's return in 2006. Another show entitled "Royle Family Portraits" was aired on Gold on Wednesday 17 November. Another Christmas special entitled "Joe's Crackers" was aired on 25 December 2010, on BBC One and BBC HD.[12] The ratings for the BBC One transmission were 11,290,000 viewers, making it the fourth-most watched programme of Christmas Day and the sixth most watched for the entire week ending 26 December 2010.[8]

A further Christmas special was planned for 2011.[13] but a script was not completed in time for filming.[14]

A Christmas special for 2012, titled "Barbara's Old Ring", aired on 25 December 2012. The broadcast was the third most popular programme on Christmas Day, achieving a rating of 9,900,000 viewers and was the sixth most watched programme for the week ending 30 December, across all UK TV channels.[8]

In the United Kingdom, the complete series is available from several streaming services including BBC iPlayer[85] and subscription services, BritBox[86] and Now.[87] In Australia, the series is currently available to stream via Foxtel Now.[88]

Relation to other works

The subsequent sitcom Early Doors was also written by Craig Cash and Phil Mealey and has a similar production style and setting to The Royle Family. Cash also appears in Early Doors.

A frequent pastime for the family is watching the BBC series Antiques Roadshow and betting on the outcome of valuations.[97][98]

Caroline Aherne and Craig Cash have both narrated and Cash continues to narrate the Channel 4 series Gogglebox, which, like The Royle Family, features people watching TV.[99]

Ralf Little and Sheridan Smith were also cast as a couple in the BBC Three sitcom Two Pints of Lager and a Packet of Crisps.

In 2001, it was announced that a proposed remake was in the works and to be retitled The Kennedys. The American version, produced for CBS,[100] featured Randy Quaid as Jim Kennedy, Pamela Reed as Pamela (Barbara), Sarah Ann Morris as Denise, John Francis Daley as Anthony, and Page Kennedy as Roger (Dave). It was set in Boston and followed the lives of a blue-collar, working-class family. The series was to adapt the original plot lines of the first series of The Royle Family. A pilot was produced in April 2001,[100] which did not prove successful and therefore CBS opted not to pick the show up.[4]