The Superman/Aquaman Hour of Adventure is a Saturday morning Filmation animated series that aired on CBS from 1967 to 1968. Premiering on September 9, 1967, this 60-minute program included a series of six-minute adventures featuring various DC Comics superheroes.[1]

Each episode consisted of new segments from the existing series, The New Adventures of Superman and The Adventures of Superboy, as well as outings for Aquaman and his sidekick Aqualad. Superman fans generally regard it as the second season of The New Adventures.[2] As a part of The New Adventures, it is notable for containing some of the final work done by Bud Collyer, the voice actor who had originated the roles of Superman and Clark Kent on radio. It also included a rotating series of "guest star" cartoons featuring the Atom, the Flash and Kid Flash, the Green Lantern, Hawkman and new shorts from The Adventures of Superboy. The Justice League of America (Atom, Flash, Green Lantern, Hawkman, Aquaman and Superman) and Teen Titans (Speedy, Kid Flash, Wonder Girl, and Aqualad, but not Robin) were also featured in team adventures.

Many of the shorts were penned and script-edited by DC Comics employees. Bob Haney and George Kashdan — the writing-editing team who were then producing the original version of the Teen Titans comic book[3] — were prolific on the series, taking on nearly all the "guest star" cartoons. Mort Weisinger, editor of all Superman comic titles during the 1960s, served as script editor for the shorts featuring Kal-El. This use of comic writers on the television series tended to make them "a very faithful adaption to the comic book mythos."[4] Even so, there were some elements which were unique to the cartoons, such as secondary characters in the Hawkman, Green Lantern and Atom shorts.

This series marked the animation debut of nearly all of its featured characters and teams. The exceptions were Superman and his supporting cast, who had been previously immortalized in the iconic 1940s Superman shorts (and later in The New Adventures of Superman), and the Superboy characters, seen in the previous season of The Adventures of Superboy.

Due to the success of the show, Filmation had produced a Metamorpho pilot and planned pilots for Plastic Man and Wonder Woman. A DC Comics cartoon hour was also being developed, with concept drawings featuring Metamorpho, Plastic Man, The Flash, The Blackhawks, the Doom Patrol, B'wana Beast, the Green Arrow and the Metal Men. Plans were cancelled when CBS secured the animation rights to Batman in the wake of ABC's recent success with the Batman live action television series.[5]

Subsequently, in 1968, the series became The Batman/Superman Hour, with new Superman/Superboy and Batman segments.[5] Previously-aired Aquaman shorts were repackaged into the 30-minute Aquaman, which also included the existing guest star segments from The Superman/Aquaman Hour of Adventure.

The series would be parodied in the Teen Titans Go! episode "Classic Titans".

Decades later, the show's format was copied by Warner Bros. Animation and Warner Bros. Television, which created The New Batman/Superman Adventures, a show which united episodes of Batman: The Animated Series and Superman: The Animated Series into one hour of episodes utilizing old episodes of both shows with new episodes. This show ran on The WB's Saturday morning block, Kids' WB, from 1997-2000.

The show continued to evolve a narrative format that had been started with the original Superman radio show, featuring a narrator who served to both compress and dramatize the storytelling. Whereas the first season of The New Adventures of Superman had featured longtime radio narrator, Jackson Beck, The Superman/Aquaman Hour of Adventure was the first to feature actor Ted Knight, who had made his Filmation debut as the narrator of the Adventures of Superboy segments late in the previous season of The New Adventures of Superman. Knight would become the main voice used in the narration of DC cartoons for over a decade, and remained the unofficial "voice of DC" even during the first year the cartoons were produced by Hanna-Barbera under the Super Friends banner. Aquaman in The Superman/ Aquaman Hour of Adventure 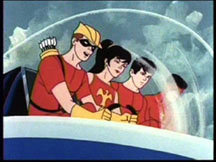 The Teen Titans in The Superman/Aquaman Hour of Adventure.

The Flash (and Kid Flash)

In 1985, Warner Home Video released eight selected Aquaman episodes of the series on VHS in the "Super Powers" video collection, along with Batman, Superboy and Superman. These videos were re-released in 1996 and are out of print. On October 23, 2007, Warner Home Video (via DC Comics and WBFE) released The Adventures of Aquaman: The Complete Collection on DVD in Region 1; the 2-disc set features all 36 Aquaman segments from the series, as well as special features.[6]