Col. Thomas Lee (c. 1690–November 14, 1750) was a planter and politician in colonial Virginia. He was a member of the Lee family, a political dynasty which included many figures from the colonial era until the late twentieth century. Lee became involved in politics in 1710 and became the resident manager of the Northern Neck Proprietary for Lady Catherine Fairfax. After his father died, Lee inherited land in Northumberland and Charles County. Lee later acquired vast holdings in what are now Arlington, Fairfax, Fauquier, Prince William, and Loudoun Counties. These properties were developed as tobacco plantations.

When Lee married Hannah Harrison Ludwell in 1722, he benefited by the connections of the already established Harrison family of Virginia. A year later he would become a member of the House of Burgesses. After Lee's home was burnt down by criminals, he lost almost all of his possessions and a fair sum of money. With donations received from Caroline of Ansbach and British officials, he built his new home on the Potomac River, naming it Stratford Hall. Four years later in 1733, he was appointed to the Governor's Council,the upper house of the General Assembly. In 1747, he founded the Ohio Company of Virginia with fellow Virginian colonists who wished to expand Virginia's territory into the Ohio River Valley. For a period of less than a year, in 1749, he became the de facto royal governor of Virginia in place of the absent William Gooch. Lee was favored for an appointment as governor by George II but died in 1750.

Thomas Lee was born around 1690 at Mount Pleasant, on the Machodoc River in Westmoreland County, Virginia. His parents were Col. Richard Lee II, "the scholar", and Laetitia Corbin, daughter of Henry Corbin. His ancestors had immigrated from Coton, Shropshire to Virginia in 1642.[1][2] As the fourth son of the couple, Lee would not receive as large an inheritance as his older brothers. This did not prevent him from becoming successful in politics.

Lee attended college at The College of William and Mary around 1700.[3] Lee's education was referred to as a "common Virginia education".[4] He soon became interested in the working of the tobacco industry. He left home to work with his uncle Thomas Corbin in the tobacco business. Coat of Arms of Thomas Lee

Lee's political career began in 1710 when he was appointed as Naval Officer of the Potomac River. The position was previously held by his father and upon his resignation, Lee succeeded to the appointment as the new Naval Officer. In 1711, Lee's uncle Thomas Corbin helped him gain the position of Virginia agent for the Northern Neck Proprietary. As a result, Catherine (Culpeper) Fairfax, Lady Fairfax, who was living in England, appointed Lee as her agent and resident manager for the Northern Neck Proprietary, which she had inherited from her father, Governor Thomas Colepeper, 2nd Baron Colepeper. Catherine was the wife of Thomas Fairfax, 5th Baron Fairfax. This property, which consisted of approximately six million acres (24,000 km2), included all the land between the Potomac and Rappahnnock rivers.

At one time Edmund Jenings, another Lee uncle, headed this Proprietary. While Jenings was in England, the offices of the agency were located at the plantation at Machodoc and under Lee's supervision.[5] Due to Jening's poor management,[6] the agency was given to Governor Robert "King" Carter in 1720. This event led to animosity between the competitive Lee and Carter families.[7] The members of the families refused to marry each other until Henry "Light Horse Harry" Lee married Anne Hill Carter. Henry and Anne's most notable child was Robert E. Lee. Thomas held this position until 1722. In 1713, Thomas succeeded his father as Naval Officer in charge of collecting customs for the south side of the Potomac.[6]

In 1714, upon his father's death, Lee inherited lands in Northumberland County near Dividing Creek, as well as land in Maryland adjoining his brother Philip Lee, Sr. of "Blenheim". Thomas leased the estate "Machodoc" from his brother Richard Lee III who was then living in London. That same year Thomas visited England, remaining for about a year.

Lee and his brother Henry negotiated a lease for 99 years on the plantation. During his stay in England, Lee had decided to buy some property on the Potomac River called the "Clifts Plantation" in Westmoreland County. At the time, the property was owned by Nathaniel Pope, Jr., a mariner, of London. Lee believed that when Virginia gained its independence, the capital would be located on the Potomac River.[8] He later renamed it as Stratford. Thomas purchased his father's old estate "Machodoc", from his sister-in-law, Martha Silk, the former wife of his older brother, Richard Lee III. "Machodoc" was later known as "Mount Pleasant".

In 1720 Thomas Lee attempted to begin a political career as one of the two Burgesses representing Westmoreland County. However, while voters clearly elected George Eskridge, the contest between Thomas Lee and fellow planter Daniel McCarty proved close. Although Lee was initially announced as the winner, McCarty successfully contested the results. McCarty was also elected as the burgess to accompany George Eskridge in 1723, but died before the 1726 session, so Lee succeeded him.[9] Lee did win election in 1728, but relinquished the seat upon appointment to the legislature's upper house, the Governor's Council, in 1733, and McCarty's son, Daniel McCarty Jr. succeeded him.[10] 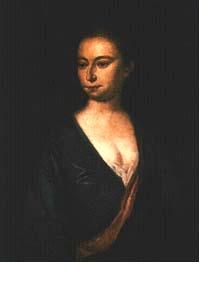 Lee thought that marriage was not only important between two individuals but for their families. A nephew of his later said, "Our Late Hon[ora]ble & worthy Unkle Presid[ent] Lee said that the first fall & ruin of families and estates was mostly Occasioned by Imprudent Matches to Imbeggar families and estates & to beget a race of beggars."[11] He was engaged to Jenny Wilson in 1716. That year he returned to England to formalize the lease to the plantation before he married. Before his return, Jenny Wilson had found another husband, James Roscoe. Lee learned this from William Byrd.[6]

In May 1722, Thomas Lee married Hannah Harrison Ludwell (December 5, 1701 – January 25, 1750), a member of the prominent Harrison family of Virginia, at Green Spring Plantation, James City County, Virginia.[12] The marriage lasted his life and brought him increased wealth and status. Hannah was the daughter of Philip Ludwell II of Green Spring, and Hannah Harrison. The couple had eleven children; eight survived to adulthood:[6]

1728 was a tragic year for Lee and his family. On January 29, thieves broke into the house stealing the Lee family plate, jewelry, and other articles of value, and upon leaving, set fire to the plantation house at Machodoc. The fire destroyed the entire plantation, including Thomas' office, the barns, and outhouses. Almost all of the Lees' possessions were destroyed, as well as up to 10,000 pounds in cash (equal to £1,438,861 today).[15] The house quickly burned and Hannah Lee, being pregnant with her fourth child, had to be thrown from her chamber window on the second floor. This resulted in Hannah's miscarriage of a son (they named him John). also injured in the fire was a young slave girl, who died of her wounds.[16] Virginia Governor William Gooch blamed transported convicts for the crime. It is said that Col. Lee's loss was not less than 50,000 pounds (equal to £7,194,304 today). British officials later gave Lee 300 pounds (equal to £43,166 today) as compensation and Queen Caroline also gave him money from her private purse to help finance the rebuilding.[17][18] The convicts and an accomplice were later found guilty. Their punishment is unknown because the trial records were destroyed.[6] When construction began on the new Lee mansion, the family stayed with Thomas's brother Henry at Lee Hall. Lee sold the "Machodoc" estate to Richard Lee III's son, George Lee, who built "Mount Pleasant".

Lee's political career required trips to Williamsburg, causing him to be away from his family for extended periods of time. Lee managed to make the 80-mile (130-km) journey to his family and to be with his wife at the births of each of their children.[19] Several of the sons became high-ranking political figures and were active in the American Revolutionary War and post-war politics. Richard Henry was a senator from Virginia to the United States Senate and Francis Lightfoot was in the Virginia Senate. Lee's youngest sons William Lee and Arthur Lee served as diplomats to various European nations.[20] William, along with Jan de Neufville, drafted an unofficial treaty between the United States and the Dutch Republic which Great Britain used as a casus belli for the Fourth Anglo-Dutch War.[21]

Lee later became a vestryman for Cople Parish and Justice of the Peace in Westmoreland County.[22] In 1723, Lee became a member of the House of Burgesses. He held this office until he was appointed to the Governor's Council in the Virginia General Assembly in 1733. This position was a lifetime appointment. The council was made up of twelve appointees who were selected by the Governor of Virginia and was the upper half of the Virginia General Assembly. The lower half was made up of the House of Burgesses. This position also gave Lee the rank of Colonel, a military rank that was second only to the governor.[6] Members of the council were advisers to the governor and judges in the General Court of the colony. Their work led them to spend about a third of the year in the capital Williamsburg.[6]

When Governor William Gooch was recalled to England in 1749, Lee was named President of the King's Council of Virginia and Commander-in-Chief of the colony. Nominated for appointment as Governor of Virginia by King George II, he died before it took place.[23][24]

Lee was appointed commissioner, along with William Beverley, to negotiate with the Six Nations of the Iroquois at the Treaty of Lancaster in 1744.[25] At the treaty, an agreement was made with the Six Nations for 400 pounds (equal to £72,459 today) in return for the right for Virginians to travel through and settle in the Shenandoah Valley.[26]

With Lee's higher rank in society and wealth, he decided he needed to build a mansion to secure his position as one of the Virginia gentry.[6] he chose the "Clifts," which he had owned since the mid-1710s. Lee decided on this site because it was located in Westmoreland County, where he was born, and because it was located on the Potomac River. The land was sufficient for having many construction laborers live there. Hannah had an influential say in the design and planning of the interior of the house. Philip, the couple's eldest son, had said, "See what it is to be ruled by a woman. I should have been now living in a house like this ... had not my father been persuaded by his wife to put up this very inferior dwelling, now over my head."[27] The exact construction date of the house is unknown but it is estimated that construction began around 1725–30, as all of Lee's sons were born at Stratford. Workers on the plantation were from all the working class: free people and indentured servants (mostly from Europe), and African slaves.[28]

Between 1719 and 1746, Lee acquired vast holdings in what are now Arlington, Fairfax, Fauquier, Prince William, and Loudoun counties. The town of Leesburg, was named in his honor as recommended by his two sons, who were the founders and trustees.

Hannah Harrison died at "Stratford" on January 25, 1749, having borne eleven children.[6] She was buried in the old family burying ground, called the "Burnt House Fields", at "Mount Pleasant". Her tombstone was later removed to "Stratford Hall", probably by Henry Lee, who built the new vault at that place. On November 14, 1750, Thomas Lee died at age sixty and was buried in the old "Burnt House Fields" at Mount Pleasant. According to his will, he wished to be buried in between his wife and his mother.[6] He bequeathed Stratford Hall to his eldest son, Philip Ludwell Lee, and the Machodoc plantation to his nephew, George Lee.[6]