Thun (French: Thoune) is a town and a municipality in the administrative district of Thun in the canton of Bern in Switzerland. It is located where the Aare flows out of Lake Thun (Thunersee), 30 kilometres (19 miles) southeast of Bern.

As of December 2018[update] the municipality has almost about 45,000 inhabitants and around 80,000 live in the agglomeration.

Besides tourism, machine and precision instrument engineering, the largest garrison in the country, the food industry, armaments and publishing are of economic importance to Thun.

The official language of Thun is (the Swiss variety of Standard) German, but the main spoken language is the local variant of the Alemannic Swiss German dialect.

The area of what is now Thun was inhabited since the Neolithic age (mid-3rd millennium BC). During the early Bronze Age there were a number of settlements along the lake shore and the Aare. A site at Renzenbühl had a local chief or nobleman's grave which contained one of the richest collections of early Bronze Age artifacts in Europe. Another site at Wiler contained approximately 1,500 maritime snail shells which were harvested from the Mediterranean and traded over the Alps.[3] The Thun-Renzenbühl axe, dating from 1800 BC, is one of the earliest examples of damascening technique in the world.[4] The gold inlay decoration on the axe may also have a numerical, astronomical meaning.[5]

The name of the town derives from the Celtic term Dunum, meaning "fortified town". It fell to Rome in 58 BC, when Roman legions conquered almost all of Switzerland, and it soon became one of the main centers of Roman administration in the region.

The Romans were driven out of Thun, and out of the rest of Switzerland, by the Burgundians around 400 AD. The Aare became the frontier between the Christian Burgundians and the Pagan, German-speaking Alemanni, who lived north. The region was mentioned for the first time during the 7th century, in the chronicle of Frankish monk Fredgar. The town is first mentioned in 1133 as Tuno.[3]

The region of Thun became a part of the Holy Roman Empire in 1033, when Conrad II gained the title of King of Burgundy. The emperors entrusted the Zähringen family, centred in Bern, with subduing the unruly nobles of central Switzerland. Around 1190 Duke Bertold V of Zähringen, built Thun castle and expanded the town. After Bertold's death in 1218, his territories went to Ulrich III von Kyburg.

In 1264 Thun received town rights and in 1384 the town was bought by the canton of Bern. Thun was the capital of the Canton of Oberland of the Helvetic Republic, which lasted from 1798 until 1803.

In 1819 a Military School was founded in the town, which later developed into the main military school in Switzerland. Thun was connected to the railway network of Switzerland in 1859 and telephone access made available in 1888. Photochrome of the Aare and Thun Castle from 1900

From the same survey, industrial buildings made up 5.7% of the total area while housing and buildings made up 26.8% and transportation infrastructure made up 12.1%. while parks, green belts and sports fields made up 4.4%. All of the forested land area is covered with heavy forests. Of the agricultural land, 11.4% is used for growing crops and 15.6% is pasturage. Of the water in the municipality, 0.9% is in lakes and 0.4% is in rivers and streams.[9]

On 31 December 2009 Amtsbezirk Thun, of which it was the capital, was dissolved. On the following day, 1 January 2010, it became the capital of the larger Verwaltungskreis Thun.[10]

The blazon of the municipal coat of arms is Gules on a Bend Argent in chief a Mullet of Seven Or.[12]

For 30 years, authorities, associations and other population groups have been visiting the Zähringer towns. In Germany, this friendly alliance includes: Freiburg im Breisgau, Villingen-Schwenningen, Neuenburg am Rhein, Bräunlingen, St. Peter in the Black Forest and Weilheim an der Teck, and in Switzerland: Bern, Freiburg, Burgdorf, Murten and Rheinfelden.[17]

Historic and modern buildings in Thun

The historical population is given in the following chart:[3] 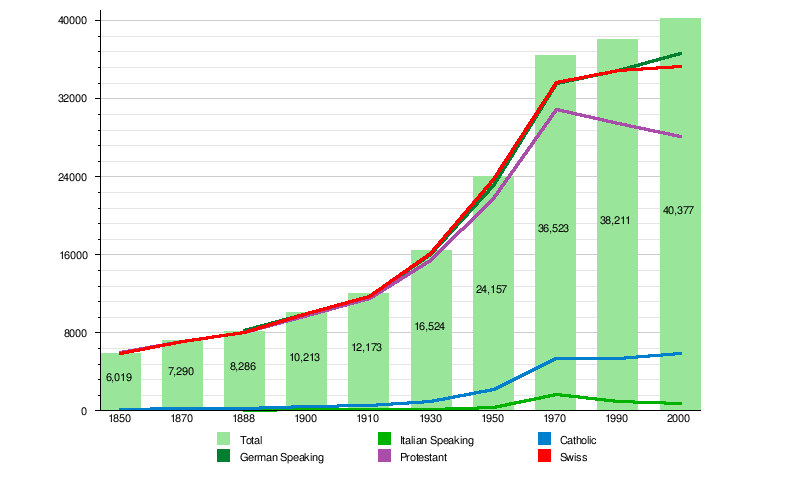 The historic Scherzligen Church in Thun

In 2011 a total of 2.4% of the population received direct financial assistance from the government.[30]

The main node for public transport in Thun is Thun railway station. Here public transport bus service, both within the urban area and connecting Thun with nearby towns, is provided by Verkehrsbetriebe STI. Intercity passenger rail service is provided by BLS AG and by Swiss Federal Railways (SBB CFF FFS). BLS also operates passenger ships on Lake Thun, which reach the station by means of the Thun ship canal.

The Steamship Blüemlisalp, the former Hotel Bellevue-Du Parc, the former Hotel Thunerhof, the zum Rosengarten House, the Landsitz Bellerive, the armory (Mannschaftskaserne), the former hospital at Platzschulhaus, the Rathaus (Town council house), the Reformed Church of Scherzligen and the Sammlung Historisches Armeematerial (Collection of Historical Military Equipment) are listed as Swiss heritage site of national significance.[31]

The Canton of Bern school system provides one year of non-obligatory Kindergarten, followed by six years of Primary school. This is followed by three years of obligatory lower Secondary school where the students are separated according to ability and aptitude. Following the lower Secondary students may attend additional schooling or they may enter an apprenticeship.[32] The Thun Arena at night

Wikivoyage has a travel guide for Thun.