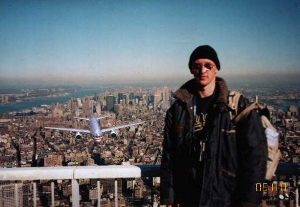 The "tourist guy" standing on the roof of the World Trade Center, seemingly seconds before the plane hits the tower.

The "tourist guy" was a hoax that featured a digitally altered photograph of a tourist on the observation deck of the World Trade Center, supposedly on the day of the September 11 attacks, showing a plane about to hit the tower in the background.[1] The photo became an Internet phenomenon as many manipulated pictures spread online. The man in the photograph was identified as Hungarian Péter Guzli, who took the photo in 1997. Guzli said he edited the photo as a joke for his friends and did not realize it would spread across the Internet.

He is also called numerous other names, including the "accidental tourist" (a reference to the novel and film The Accidental Tourist), "Waldo" (a reference to Where's Waldo?), the "WTC Guy", and the "tourist of death".

Hoaxapedia from Museum of Hoaxes' online encyclopedia listed some of the inconsistencies that ultimately confirmed that the photograph was a hoax.[2] These include:

The picture became a widely known example of an internet meme. As its fame spread, other people started to use the same tourist for other pictures. They included the tourist present at the sinking of the RMS Titanic, at the John F. Kennedy assassination, the destruction of Air France Flight 4590 and at the Hindenburg disaster. In one version, the aircraft has been replaced with a Melbourne tram. Other pictures show him present at disastrous events in movies, like the destruction of the White House in Independence Day, Godzilla demolishing Tokyo, or as the bus driver in Speed. There are also pictures of him together with people from other famous digitally manipulated pictures, such as Bert or a man holding a huge cat. There even appeared a picture of the Yalta conference where Stalin is replaced by the man with the cat, with the tourist and Bert in the background.

The first person who claimed to be the tourist was the Brazilian businessman José Roberto Penteado.[2] When Penteado started to get media attention, including an offer to be in a Volkswagen commercial, a 25-year-old Hungarian man, Péter Guzli, came forward as the real tourist.[4] Guzli says, however, that he does not want publicity and did not originally release his last name.

Guzli took the photo on November 28, 1997, and was also responsible for the initial edit. He said he edited the image for a few friends, not realizing it would spread so quickly across the Internet. He first provided the original undoctored photo and several other photos from the same series as proof to a Hungarian newspaper.[5] Later on, the show Wired News examined the evidence and confirmed that Guzli was the real tourist guy.[6]