The Transamerica Pyramid at 600 Montgomery Street between Clay and Washington Streets in the Financial District of San Francisco, California, United States, is a 48-storey futurist[citation needed] skyscraper and the second tallest building in the San Francisco skyline. It was the tallest building in San Francisco from its completion in 1972 until 2018 when the newly constructed Salesforce Tower surpassed its height.[5] The building no longer houses the headquarters of the Transamerica Corporation, which moved its U.S. headquarters to Baltimore, Maryland. However, the building is still associated with the company by being depicted on the company's logo. Designed by architect William Pereira and built by Hathaway Dinwiddie Construction Company, the building stands at 853 feet (260 m). On completion in 1972 it was the eighth-tallest building in the world.[6] It is also a popular tourist site. In 2020, the building was sold to NYC investor Michael Shvo. [7]

The Transamerica building was commissioned by Transamerica CEO John (Jack) R. Beckett, with the claim that he wished to allow light in the street below. Built on the site of the historic Montgomery Block, it has a structural height of 853 feet (260 m) and has 48 floors of retail and office space.

Although the tower is no longer Transamerica Corporation headquarters, it is still associated with the company and is depicted in the company's logo. The building is evocative of San Francisco and has become one of the many symbols of the city.[9] Designed by architect William Pereira, it faced opposition during planning and construction and was sometimes referred to by detractors as "Pereira's Prick".[10] John King of the San Francisco Chronicle summed up the improved opinion of the building in 2009 as "an architectural icon of the best sort – one that fits its location and gets better with age."[11] King also wrote in 2011 that it is "a uniquely memorable building, a triumph of the unexpected, unreal and engaging all at once. ... It is a presence and a persona, snapping into different focus with every fresh angle, every shift in light."[12]

The Transamerica Pyramid was the tallest skyscraper west of Chicago when constructed, surpassing the then Bank of America Center, also in San Francisco. It was surpassed by the Aon Center, Los Angeles, in 1974.

The building is thought to have been the intended target of a terrorist attack, involving the hijacking of airplanes as part of the Bojinka plot, which was foiled in 1995.[13]

In 1999, Transamerica was acquired by Dutch insurance company Aegon. When the non-insurance operations of Transamerica were later sold to GE Capital, Aegon retained ownership of the building as an investment.[9] In 2020, the building was purchased by SHVO and Deutsche Finance America for $650 million.[14]

The Transamerica Pyramid was the tallest skyscraper in San Francisco from 1972 to 2017, when it was surpassed by the under-construction Salesforce Tower.[15] It is one of 39 San Francisco high rises reported by the U.S. Geological Survey as potentially vulnerable to a large earthquake, due to a flawed welding technique. [16]

The land use and zoning restrictions for the parcel limited the number of square feet of office that could be built upon the lot, which sits at the north boundary of the financial district.

The building is a tall, four-sided pyramid with two "wings" to accommodate an elevator shaft on the east and a stairwell and a smoke tower on the west.[17] The top 212 feet (65 m) of the building is the spire.[18] There are four cameras pointed in the four cardinal directions at the top of this spire forming the "Transamerica Virtual Observation Deck."[citation needed] Four monitors in the lobby, whose direction and zoom can be controlled by visitors, display the cameras' views 24 hours a day.[citation needed] An observation deck on the 27th floor was closed: the Pyramid's official website says that it was closed to the public in 2001,[19] while the New York Times reported that it has been closed "[s]ince the late 1990s".[20] It was replaced by the virtual observation deck a few years later. The video signal from the "Transamericam" was used for years by a local TV news station for live views of traffic and weather in downtown San Francisco.[citation needed]

The top of the Transamerica Pyramid is covered with aluminum panels. During the Christmas holiday season, on Independence Day, and during the anniversary of 9/11, a brightly twinkling beacon called the "Crown Jewel" is lit at the top of the pyramid.[17]

At the base of the building is a half-acre privately owned public space designed by Tom Galli called Redwood Park. A number of redwood trees were transplanted to this park from the Santa Cruz Mountains when the tower was built. It is generally open to the public during the daytime. It features a fountain and pond designed by Anthony Guzzardo, containing a jumping frog and lily pads bronze sculpture commemorating "The Celebrated Jumping Frog of Calaveras County" by Mark Twain (sculpture by Richard Clopton, 1996); a Glenna Goodacre bronze sculpture of children at play (1989); a bronze plaque honoring the dogs Bummer and Lazarus, celebrating their skill at catching rats; and benches and tables offering respite to workers and visitors alike.[20][21][22]

This section needs additional citations for verification. Please help improve this article by adding citations to reliable sources. Unsourced material may be challenged and removed.Find sources: "Transamerica Pyramid" – news · newspapers · books · scholar · JSTOR (June 2018) (Learn how and when to remove this template message) 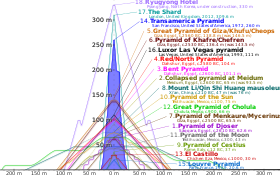 Comparison of approximate profiles of the Transamerica Pyramid with some notable pyramidal or near-pyramidal buildings. Dotted lines indicate original heights, where data is available. In its SVG file, hover over a pyramid to highlight and click for its article.