In August 1986, the Metropolitan Transport Trust was rebranded as Transperth. In February 1995 the provision of ferry services was contracted to Captain Cook Cruises.[3][4] In September 1993, the Government announced Transperth would be corporatised and opened up to competition.[5] In February 1995 in preparation for privatisation, Transperth was restructured with the operation of services transferred to MetroBus, with ownership of the buses retained by Transperth.[6][7][8]

In September 1994, expressions of interest were sought from organisations for the operation of Transperth bus services in the Armadale South and Joondalup North areas.[9] MetroBus successfully bid to retain these services.[10]

Transperth retained ownership of the buses leasing them to the operators. MetroBus did not win any further tenders and operated its last bus on 8 November 1998.[23]

The Metropolitan Transport Trust adopted an olive green and cream livery. Following the 1986 rebranding as Transperth a green and white livery was introduced, this being replaced in 1999 by a grey/silver and green livery. This livery was inversed in 2010 as part of a refurbishment.

Transperth offers bus, ferry and train services which currently serve the Perth Metropolitan Area from the Perth CBD, east to Wundowie, west to Fremantle, south to Mandurah-Pinjarra and north to Two Rocks. These suburbs are divided into nine fare-zones according to distance from the city centre.[24]

All buses operated under Transperth are low-entry, wheelchair accessible,[25] and air conditioned.[citation needed] Bus services in Perth are operated by three private companies with services divided into 11 zones that are re-tendered every 10 years.[citation needed] Since January 2020, the contracts were held by:[26]

As of September 2015, there have been a number of fires aboard the fleet's natural gas powered Mercedes-Benz OC 500 LEs. It was discovered that there were possible faults in the on-board fire suppression system installed in the engine compartment at the rear of the bus. A bus fire at the Elizabeth Quay bus station in July was said to have been caused by a leaking coolant cell. A series of one-off fires have occurred in two of the fleet's Mercedes-Benz O405NH diesel buses, both of which were sparked by frayed fan belts. Nobody was injured in any bus fires as the drivers were quick to respond and evacuate any passengers before the fires became lethal. The Blue and Red Joondalup CATs run Monday to Friday only. The Yellow CAT runs Monday to Thursday during ECU days.

Transperth operates a ferry service across the Swan River between Elizabeth Quay (Perth CBD) and the South Perth foreshore. Services depart twice an hour during winter and every 15 minutes during summer. The ferry is popular with commuters and tourists who use it to get to the Perth Zoo. There are currently three Transperth ferries, the MV Shelley Taylor-Smith,[29] the MV Phillip Pendal[30] and the MV Tricia.[31] The ferry service has been operated under contract by Captain Cook Cruises since February 1995.[4][32] In the year ended June 2015, there were 400,000 passenger boardings on Perth ferry services.[33] On 15 November 2019, Transperth announced the third ferry to be named MV Tricia, after Tricia the elephant who is currently in Perth Zoo. MV Tricia was built locally in Dongara, Western Australia.[34][35][36] Its maiden voyage was on Friday, 20 December 2019, with a special trip down the Swan River passing the Swan Bells, Matagarup Bridge and Optus Stadium.[37][38]

Transperth Train Operations, a division of the PTA, operates Perth's urban rail services. The network consists of 70 railway stations on six narrow-gauge lines to Midland, Armadale, Fremantle, Butler and Mandurah. Trains to Thornlie run via a branch off the Armadale line.

The network has been served exclusively by electric multiple unit railcars since it was electrified in the 1990s. Before that diesel locomotive-hauled trains and ADK/ADB and ADL/ADC diesel multiple units were used.[39]

Introduced in 2003 as TravelEasy before rebranding to My Account in 2014–15,[40] My Account is an online account for Transperth passengers to manage their SmartRider, parking registration, and travel alert services.

My SmartParker is the portal for passengers who park their cars at train stations to register their cars in order to use their SmartRider to pay for parking.

My Alerts is the service which My Account users can register for in order to receive alerts about upcoming works, changes and disruptions on their nominated services. These notifications are distributed via email. Advance notice is given for permanent changes and planned disruptions, with unplanned disruptions typically only being notified if they are significant (such as long delays or non-trivial peak hour delays).

Perth became the first city in Australia to use Google transit, whereby all bus stops, railway stations and ferry wharfs have a clickable symbol on Google Maps which reveals the next departures from that stop. Public transport is also available as an option for Google Maps' directions feature.[41]

As of 10 December 2009, the TravelEasy users can view the live train times to see whether the train services is on time or not as well as live departure times.[42] This service has now been made available to all commuters, and a cut-down version has been placed on 136213.mobi.

The 136213.MOBI service was launched on 10 June 2008. The service allows for public transport information, such as upcoming departures, service changes and SmartRider balances, to be obtained on a WAP-compatible mobile phone.

The ticketing system used on the network has been updated as technology has advanced, with the current options available to passengers being cash tickets from ticket vending machines at railway stations, a ferry wharf, or bus driver or by using their SmartRider, a re-loadable stored-value card.[43]

The Transperth network is separated into 9 fare zones plus a "Free Travel Zone" in the Perth CBD, with fares being calculated based on number the of zones crossed at either standard or concession rates, with SmartRiders taking a 10% discount, increasing to 20% with the Autoload feature active. Additionally, SmartRider users have their daily fare capped at the price of the DayRider special fare. Due to a fare cap introduced on 1 January 2022, fares for each trip are limited to 2 zones, with the effect that the ordinary fares available are 2 section, 1 zone, and 2 zones.[44] In addition to these ordinary fares, there are several special fares available.[45]

The special fare classes and concessions include:[46]

In the early 1990s, the network changed over from the use of train conductors with old rotary paper ticketing units and installed self-service ticket vending machines supplied by Ascom. The same rotary units in place on buses were replaced with technology supplied by Wayfarer Transit Systems.

Also at the same time, an upgraded version of the pre-encoded multi-trip ticket system MultiRider was introduced, also relying on technology from Wayfarer. These trial units are based on touch-screen technology, and provide an expanded number of options including being able to purchase multiple quantities of tickets at the same time, as well as optionally being able to pay using either notes or electronic funds transfer from a cheque or savings account using a debit card, dependent on these components being installed in the unit. These are now installed in all railway stations in place of the older ticketing vending machines. They were made by and contracted out to Xerox who won the bid to change out the fare system.

The SmartRider is a smartcard incorporating a microchip and internal aerial, allowing the smartcard to communicate with processors located on Transperth buses and ferries and at railway stations. The microchip enables value to be loaded onto the card, as well as allowing the journey details to be recorded and the appropriate fare deducted from the stored value on the card. The card is able to pay for bus, ferry or train travel and can also be used at some Pay 'n' Display railway station car parks to pay for parking. In a system which Transperth calls "SmartParker", the user can register their car's registration plate and pay for parking by swiping the card at a payment machine on the way from the car park to the station: such payment is now valid for 24 hours.

It is also used to authenticate access to the Lock 'n' Ride secure bicycle storage areas at some stations.[50]

Perth has a Free Transit Zone (FTZ) with travel free on buses in the central business district. The FTZ funded by an annual levy on non-residential parking bays in Perth, East Perth, West Perth and Northbridge.[51]

On the rail network, however, free travel within the zone is only available to passengers who have purchased a SmartRider card. This was not always the case, but is now required due to changes in station structures brought about by the implementation of the SmartRider ticketing system.[52] 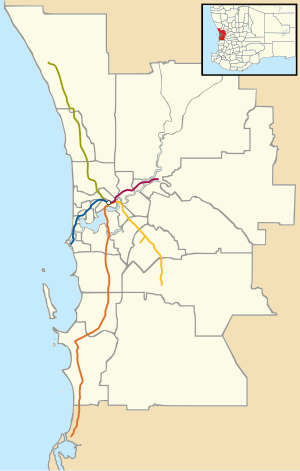 In September 2012, the government announced that construction would begin in 2016 on a new Perth light rail network, to be known as Metro Area Express (MAX).[53][54] The first stage of the MAX network was to run from the Polytechnic West campus in Balga, in Perth's northern suburbs, to the Perth CBD, with spur lines from the CBD to the Queen Elizabeth II Medical Centre in Nedlands and The Causeway in East Perth. Construction of the first stage was scheduled to be completed by the end of 2018.[53] In December 2013 the government deferred a decision on whether to build the line, with it cancelled in 2016.[55]

Prior to the 2017 Western Australian state election, the then-opposition Labor Party promised a large expansion to Perth's rail network under the title Metronet.[56] After the comprehensive victory by Labor, the Mark McGowan government established Metronet as an agency of the Public Transport Authority to oversee a number of projects to expand and improve the network.[57] Projects in stage one include:

In August 2014, the government announced the 8.5 km Forrestfield–Airport Link[58][59] would be constructed providing a service to Perth Airport and Forrestfield.[60][61] Construction commenced officially in November 2016, with the line due to open in the first half of 2022.[62][63]

A link to Ellenbrook had been originally promised by then-Premier Alan Carpenter and Opposition Leader Colin Barnett prior to the 2008 elections, however this proposal was not realised.[64] Mark McGowan revived the project in 2017.[65] A business case is currently being prepared for a new 21 km Ellenbrook spur line with stations at Morley, North Morley (Dianella), Noranda, Malaga, Bennett Springs, Whiteman and Ellenbrook.[66] Construction work is expected to start in 2019 and be completed in 2022.[67]