Turisas is a Finnish metal band from Hämeenlinna. They were founded in 1997 by Mathias Nygård and Jussi Wickström, and named after an ancient Finnish god of war.

Turisas are a folk metal band, incorporating elements of power metal and symphonic metal along with frequent harsh vocals. Turisas is known to play most of their solos on electric violin, as opposed to traditional guitar solos.

Since 2003, Turisas have been signed to Century Media records, which released their debut album Battle Metal in 2004. Then the band went on a European tour with various guest musicians on instruments such as violins and accordions.

On 28 October 2005, guitarist Georg Laakso was badly injured in a car accident and due to the extent of his spinal cord injuries, on 12 July 2006 issued a statement of his permanent resignation from the band on the official website. Nevertheless, the band continued to work on their second album, titled The Varangian Way, which was released in early 2007. Jussi Wickström recorded all guitars on the album.

Mathias Nygård revealed in the January 2007 edition of Terrorizer magazine that the touring musicians Hannes Horma, Olli Vänskä, Janne Mäkinen and Antti Laurila had been added to the band as full-time members, taking them up to an 8-piece act. It later turned out that of the two accordion players, only Mäkinen had become an official member. Laurila is no longer a touring musician for the band. On 19 February 2007, keyboardist Antti Ventola posted a message on the Turisas discussion forum announcing that he and the band had parted ways. This was later confirmed by the rest of the band. Mathias Nygård performed the keyboards on The Varangian Way and Turisas are presently using backing tracks to replicate them on stage.

In January 2008, accordion player Janne "Lisko" Mäkinen disappeared mysteriously in Amsterdam. For the upcoming tour dates in spring 2008 Turisas announced Netta Skog as a step-in accordionist. She had already helped the band on the European tour in October–November 2007.[1] Netta was soon after added to the band on a full-time basis.

After a string of festivals in the Summer of 2008, in September the band started a long tour through the United States and Europe in support of DragonForce. This tour ended in March 2009, and the band then took part in a new European tour with Cradle of Filth and Moonspell, dubbed the "Filthfest Tour 2009", in April and May 2009.[2] The band played at Wacken Open Air in early August 2009 and also played at Bloodstock Open Air in mid August 2009.[3] The band took time off at the end of 2009 to make a new album and then planned to return as fully-fledged band no longer supporting others. In 2010 the band concentrated on finishing the recordings of the upcoming third album. Still, the band did a short tour in Asia and Australia in May 2010, including headline concerts in Sydney and Melbourne, two gigs in China, a gig in Shanghai World Expo 2010 and a gig in Japan.

As of March 2010, Turisas announced they were in the studio working on a new album; at that time, the band documented the recording process in a series of studio diary videos on YouTube.[4] The title for the latest album, Stand Up and Fight, was revealed on 11 November 2010: the album was released through Century Media on 28 February in Europe and 8 March in North America.[5] A new song off that album: "The March of the Varangian Guard" was performed at the band's Finnish gigs in October 2010 [6] On 17 December 2010, the title track "Stand Up And Fight" was released as a free download on the band's website.

The band took part in tours in Mexico and North America with Cradle of Filth, the other supporting bands being Nachtmystium and Daniel Lioneye beginning in January 2011[7] and in Europe with Die Apokalyptischen Reiter from March through April 2011.[8] Their England tour came with Crimfall as the supporting band, as well as other local supporting bands. 2012 saw them headline the North American "Paganfest: America Part III" tour with Alestorm, Arkona and Huntress in tow. 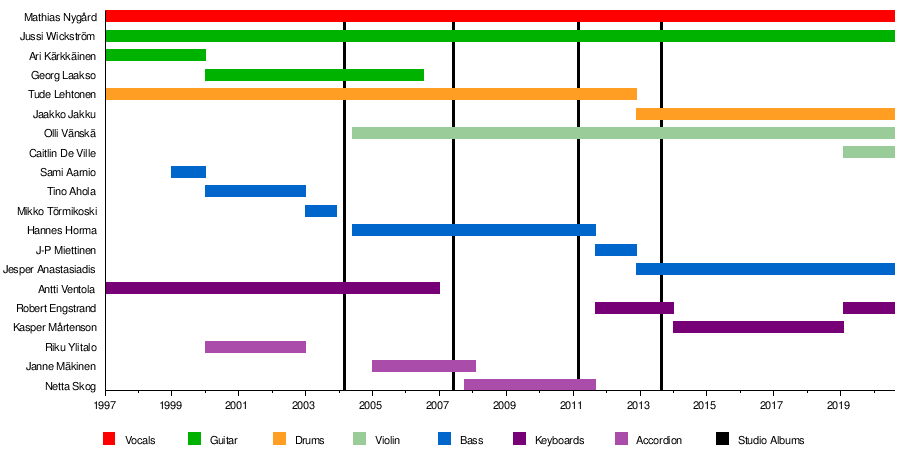