This article needs additional citations for verification. Please help improve this article by adding citations to reliable sources. Unsourced material may be challenged and removed.Find sources: "Underbelly" venue – news · newspapers · books · scholar · JSTOR (January 2021) (Learn how and when to remove this template message)

The Underbelly is a venue at the Edinburgh Festival Fringe off Cowgate. From 2001-2004, Underbelly was the only venue operated by Underbelly Limited. In 2005, Underbelly added the Baby Belly venue. In 2006, these venues were joined by the E4 UdderBELLY and the Cow Barn.

History of the Underbelly

Underbelly was first opened in 2000, as a small performance venue for five shows brought to the Fringe by Double Edge Drama. The Double Edge directors had heard of the venue through a production of Gargantua, performed by the Scottish company, Grid Iron in the vaults below the central library of Edinburgh. The site was discovered by Judith Doherty and named 'Underbelly' by Judith and Ben Harrison. Grid Iron staged a show there. The location's and Double Edge's shows won a Fringe First for its critically acclaimed productions of Bent and Marat Sade.

In 2001, "Underbelly Limited" and "By Popular Demand Productions Limited" were set up to turn the Underbelly into a professional venue with a number of performance spaces and a wide range of productions.[citation needed] The venue was set up with performance spaces in the Iron Belly, White Belly and Big Belly. The Belly Laugh (then named the Belly Bar) was also used for late night cabaret as well as the venue's second bar. Space downstairs which is now used for Belly Dance was used to exhibit a film installation by Nick Hornby.

In 2002, The Underbelly was renamed The Smirnoff Underbelly. The number of performance spaces was increased to include the Belly Button and Belly Laugh comedy venues and a third bar, the Jelly Belly, to the first floor. The number of shows increased from 18 to over 50. In 2003, the Belly Dancer was soundproofed to ensure that it can be used throughout the day without disrupting other performances. This allowed Underbelly to team up with Forth One 97.3 to host a series of free live music gigs every night in the Belly Dancer, known as the Forth One Fringe. These gigs have included Mark Owen, Ocean Colour Scene and Skin and Keane In 2004, the Delhi Belly space was added. The bars were rearranged to create more space and ease congestion and queuing. Finally, a brand new large box office was created in one of the rooms off the front alley, which freed up the old box office to become a larger and more usable publicity office with a sofa and coffee. The shows at the Underbelly venue won a record number of awards, including the Perrier Award for Jackson's Way; Fringe First Awards for The Ignatius Trail, Manchester Girl and The Jammer; Perrier Newcomer Nomination for Joanna Neary in Joanna Neary is Not Feeling Herself; and an Amnesty Award nomination for Someone Who'll Watch Over Me.

In 2005, Underbelly was joined by the Baby Belly on Niddry Street, just off Cowgate, a two-minute walk from the original venue. The number of shows was now up to 140 spread over the three weeks of the Edinburgh Fringe. 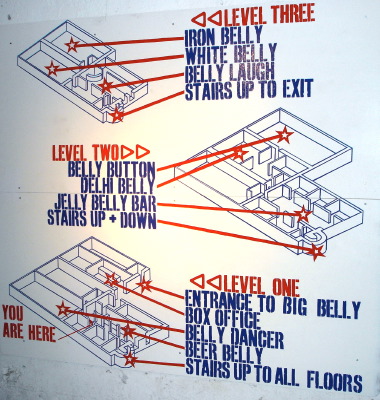 The floor plan for Underbelly.

The Edinburgh Fringe has come on for criticism in recent years for its commercialism and corporate sponsorship.[citation needed] Underbelly has been associated with Smirnoff.[1]

Performers who have appeared at Underbelly over the years include