Vailoatai is a village in southwestern Tutuila, the main island of American Samoa. It is located on the eastern end of Leone Bay. The village is known for its beautiful malae (ceremonial village-green) located along the island's rugged southern coast, lined by the fale tali mālō (guest houses) of its village chiefs.

The original name of the village was Tuāulu.[2] In 1926, Tuāulu and another village within the district, named Vailoa, combined to form the Vailoa-tai village.[3] Although the whole of the village is named Vailoatai, residents further divide it into Vailoa-uta and Falīlī areas. [ tai - on the side towards the sea, seaside; uta - on the side towards the land, inland ] 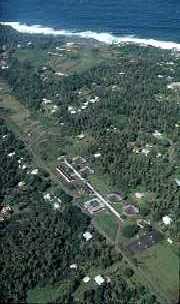 The Vailoa name is short for "le vai na le iloa" (the unknown/unseen water) in reference to the legend of a time long ago when King Tuimanu'a and his traveling party stopped in the area and the difficulty they encountered in their search for water.[4]

Vailoatai is a historical marker of the Ātua (a political district of 'Upolu) migration to Tutuila with many Vailoa family names originating from the Ātua sub-district of Faleālili.[5] The village honors this legacy to this day, recognizing Faleālili in its fa’alupega (charter).[6]

The migration of Ātua families to Tutuila occurred after the defeat of Mālietoa by Tui Ātua[7][8][9] in the 16th century.[10] The political effect of this migration was the addition of six more counties to the original four counties of Tutuila[11] to make the overall organization of the island in keeping with the 'Upolu pattern.[12]

The village and the district became a proponent of this government (mālō) as can be seen in the old Sāmoan parable, the War between Tuveve and Sātele.[13]

The HTC Tuā'olo, of the Ma'opūtasi district, is the protector of the salutation, Faleagafulu (the ten houses of Tutuila); this was a gift Queen Salamāsina gave to the Tui Manu’a during her installation as Sāmoa's first Tafa'ifā (holder of the four pāpā titles). The Manu'a king would then bestow the title upon the HTC to thank PC Mauga for his hospitality during a visit to Tutuila on his return trip home.[18]

The raising of the U.S. flag over Tutuila saw the end of Ātua's influence over the island, much to the relief of local chiefs who were tired of the endless wars in 'Upolu.[19] They did not want to remain under the control of 'Upolu paramount chiefs, Germany or Great Britain.[20] PC's Sātele and Fuimaono of Vailoa were two of the signatories to the Tutuila Deed of Cession in 1900.[21]

In 1907, the village celebrated the opening of its first Christian chapel with the London Missionary Society (LMS). LMS missionaries note that an elaborate feast marked the special occasion with attendance by dignitaries and family members from around the island.[24]

In 1915, the Manu'a islands suffered severe damage from a hurricane, and the village hosted (among other villages in Tutuila) many residents from Manu'a while relief efforts took place there.[25][26]

In 1934, the Marist Le'alā School for boys opened up in the area between Vailoatai and Taputimu. The school, however, is no longer in existence.[27]

During World War II, U.S. Marines built an airstrip that spanned Leone, Vailoatai and Taputimu. It was started early in 1943 - probably in January. It was completed on 30 September 1943.

Unfortunately, the airstrip could not be used due to prevailing winds, which made take-offs difficult.[28] Only two planes were able to make use of the airstrip before it was abandoned.[29] Government facilities and residential units have since been built over the old airstrip. In September 1965, Leone High School was opened in the Vailoa-uta area of the village. The school was designed for students from the Western District and transfer students from Manu'a.

In May 1968, the government radio station WVUV-AM moved from Utulei and began operations at its new quarters in Vailoatai, next to Leone High School.[30][31]

In the early 70's, Governor Haydon pushed to privatize the station despite opposition from the Fono. By 1975, the Federal Communications Commission (FCC) approved the application by Radio Samoa, Ltd. to take over WVUV-AM from the government.[32]

By the late 90's, the old station had gone off air and is now defunct. South Seas Broadcasting, Inc. bought what was left of the station, and in 2008, opened WVUV-FM at the Aitūlagi Building office complex in Tafuna.[33]

However, the last year the village fautasi, the Fa'asaulala, participated in the annual race was 2014.

The village also performed its siva ma pese program for the Independent State of Sāmoa's celebration of their independence day in 2010 and 2012.

Tuāulu was specifically set aside to prepare human sacrifices for Tuife'ai during his reign.[39] A forceful blow was applied to the back of the head, or tuāulu, using a traditional heavy war club like the talavalu.[40]

Tuife'ai is a title that has many tala (legends) from Manu'a, Tutuila and 'Upolu. Sunia notes that the title goes back as far as 500 A.D.,[41] and that the Tuife'ai of that time is responsible for the first failed invasion of the Manu'a kingdom. The title established familial ties with the Mālietoa in the 13th or 14th century.[42]

Asotau is the name of the village malae. It is a historical marker of the Tafa'ifā I’amafana's failed invasion of Manu’a in the 18th century. The counties of Sua and Vāifanua rallied under PC Le’iato[43][44][45] to expel I’amafana's forces from Tuālātai, where the king sought refuge under the protection of his relative, PC Sātele, during his retreat from Manu’a.[46]

After a battle ensued,[47][48][49] the conflict was resolved peacefully via a traditional style intercession known as a seumālō.[50][51] King I’amafana and his forces returned to 'Upolu, and the village took the words ‘aso tau’ (Day of War) as the name of its malae to commemorate the event.

If you look closely, you'll notice that the layout of the malae was modeled after that of a Sāmoan chiefly guesthouse. Each of the faletalimālō at the perimeter of the malae is like each of the posts of a guest house, just on a larger scale.[52]