The White Court was less conservative than the preceding Fuller Court, though conservatism remained a powerful force on the bench (and would remain so through the mid-1930s).[1] The most notable legacy of White's chief-justiceship was the development of the rule of reason doctrine, used to interpret the Sherman Antitrust Act, and foundational to United States antitrust law. During this era the Court also established that the Fourteenth Amendment protected the "liberty of contract." On the grounds of the Fourteenth Amendment and other provisions of the Constitution, it controversially overturned many state and federal laws designed to protect employees.

The White Court began in December 1910 when President William Howard Taft appointed White to succeed Melville Fuller as Chief Justice. White was the first incumbent associate justice to be appointed as Chief Justice.[2] Earlier in 1910, Taft had appointed Horace Harmon Lurton and Charles Evans Hughes to the Supreme Court. In 1911, Taft appointed Willis Van Devanter and Joseph Rucker Lamar to the court, filling vacancies that had arisen in 1910. The White Court thus began with the five Taft appointees and four veterans of the Fuller Court: John Marshall Harlan, Joseph McKenna, Oliver Wendell Holmes, Jr., and William R. Day. Harlan died in 1911, and Taft appointed Mahlon Pitney to replace him. Lurton died in 1914, and President Woodrow Wilson appointed James Clark McReynolds to replace him. 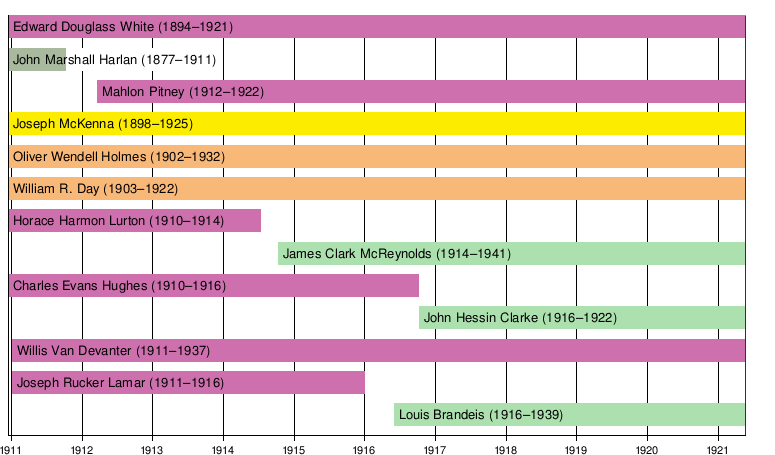 Though the White Court continued to strike down some economic regulations and make conservative rulings, it was more open to such regulations than the other courts that preceded the New Deal.[1][3] The White Court issued several favorable rulings towards an expanded interpretation of the Commerce Clause and taxing powers, although Hammer stands as a notable exception.[3] The White Court also issued notable rulings in the wake of World War I, and the court generally ruled in favor of the government.[4] After the 1916 appointments, the court had three ideological wings: Holmes, Brandeis, and Clarke were the progressives, McKenna, White, Pitney, and Day were centrists, and McReynolds and Van Devanter were conservative.[1] Prior to his resignation, Hughes was often considered a progressive, while Lurton and Lamar did not serve long enough to develop strong ideological leanings.[5] Regardless of the ideological blocs, consensual norms and the high load of relatively mundane cases faced by the Supreme Court prior to the Judiciary Act of 1925 meant that many cases were decided unanimously.[6]