A member of the Association of American Law Schools (AALS), the school is accredited by the Council of the Section of Legal Education and Admissions to the Bar of the American Bar Association (ABA).[4] It offers a Juris Doctor, with certificates available in Native Hawaiian Law, Pacific-Asian Legal Studies, and Environmental Law, with students able to matriculate either full-time or part-time. It also offers an Advanced Juris Doctor, for foreign students who have earned a law degree abroad, and a LLM.

The establishment of the Law School in 1973, was considered the achievement of former Hawaii State Supreme Court Chief Justice, William S. Richardson.[2] For many years he had pressed the Hawaii State Legislature for its creation, arguing that the state would benefit by providing a legal education for its residents that enveloped its cultural customs—because they had the greatest stake in constructing the state's legal traditions going forward as such. At his retirement, the Law School was named in his honor.

The spirit of Richardson's culture as a community devoted to the study of law is manifested in Kānāwai Māmalahoe, the fundamental precept of Hawaiian law.

Originating in a royal edict by King Kamehameha I in 1797, galvanizing the Kingdom of Hawai'i's legal system, Kānāwai Māmalahoe, or Law of the Splintered Paddle, was enshrined later in the Hawaii State Constitution, Article 9, Section 10.[7]

According to Hawaiian legend, Kānāwai Māmalahoe was declared by King Kamehameha after an incident where he chased two fishermen who were fishing illegally, when he caught his leg in the reef, and one of the fisherman, Kaleleiki, hit him mightily on the head with a paddle in defense, which broke into pieces. Luckily, Kamehameha was able to escape. Years later, when the same fisherman was brought before him to account for the incident, Kamehameha held that in the interest of justice he should be released, as he had only been searching for food for his family.[7]

Reflecting Kānāwai Māmalahoe, the school maintains a "commitment... to a collaborative community that is deeply committed to the... pursuit of social and economic justice" for all.[8] Reflecting this commitment, its unofficial logo is Kaleleiki, the fisherman.

University of Hawaii at Mānoa Campus With The William S. Richardson School of Law Library In Background

According to Richardson's official 2013 ABA-required disclosures, 50.9% of the Class of 2013 obtained full-time, long-term, JD-required employment nine months after graduation.[17] Richardson's Law School Transparency under-employment score is 10.2%, indicating the percentage of the class of 2017 unemployed, pursuing an additional degree, or working in a short-term, part-time, or non-professional job nine months after graduation.[18] It is unclear whether the Law School's above-average clerkship placement rate for new graduates is reflected in these numbers.[19] 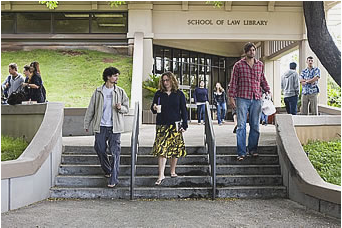 The University of Hawaii Law Review is a scholarly legal journal run by students that publishes works by jurists, scholars and practitioners. It publishes two issues annually, and hosts a biennial symposium.

The Asian-Pacific Law and Policy Journalis a biannual peer-reviewed open-access law journal published by the school. It covers issues facing Asia and the Pacific Rim. The journal was established in February 2000, with Jim Hitchingham as editor-in-chief and with assistance and support from Lawrence Foster, Dean of the law school, and professors Ronald Brown and Mark Levin. In addition to its web format, the journal is available through the legal databases LexisNexis and Westlaw.[34]

Each year, the United States Court of Appeals for the Ninth Circuit sits specially at the school to hear some appeals from the United States District Court for the Districts of Hawaii and Guam.[35][36] The Hawaii Supreme Court also sits regularly.[37][38]

Started in 2007 under the tutelage of Senior Circuit Judge of the United States Court of Appeals for the Eight Circuit, Myron H Bright, the Bright International Jurist-in-Residence program hosts international jurists to facilitate dialogue with the wider community and the school's faculty and staff.

Instituted in 1987, with the support of Myron H. Bright, a Senior Circuit Judge for the United States Court of Appeals for the Eight Circuit, Richardson has a U.S. Supreme Court Jurist-In-Residence Program. Biannually, a visiting U.S. Supreme Court Justice presents seminars on current judicial issues as well as teaches classes.[40]

Through the University of Hawaii at Manoa Foundation, Richardson has been endowed with several professorships and faculty chairs.

In 2013,The Princeton Review ranked the Richardson faculty as the third "Most Diverse Faculty."[47] And, in 2012, U.S. News & World Report ranked the school 3rd of 190 Law Schools for "Smallest Faculty-Student Ratio".[48] The faculty is specialized in an array of legal areas.

In 2013, U.S. News & World Report ranked the school 25th of 190 Law Schools for "Most Selective". In addition, Richardson is recognized for its highly diverse student body. In 2013, U.S. News & World Report ranked it 1st of 190 Law Schools for "Diversity Index,"[52] while Princeton Review ranked it "Best Environment for Minority Students."[53]

Adopted in 2002 as an aspirational reflection of Kānāwai Māmalahoe, all Richardson students recite the William S. Richardson School of Law Law Student Pledge , written by late Professor Chris Iijima, before a Hawaii Supreme Court Justice during a special ceremony before they begin their legal education.

In the study of law, I will conscientiously prepare myself;

To advance the interests of those I serve before my own,

To approach my responsibilities and colleagues with integrity, professionalism, and civility,

To guard zealously legal, civil and human rights which are the birthright of all people,

To endeavor always to seek justice.

This I do pledge. Adopted in 2002 as an aspirational reflection of Kānāwai Māmalahoe, all Richardson students recite the Law Student Pledge, written by late Professor Chris Iijima, before a Hawaii Supreme Court Justice during a special ceremony before they begin their legal education. Begun by Professor Calvin Pang, every year on Stew Day, the Richardson Faculty dress up in goofy hats and aprons and serve a stew lunch to the students.[60] Recently added to Stew Day, Professor Pang orchestrated the "Red Socks Award" – in honor of Dean Aviam Soifer, a Boston Red Sox Fan. H