Worzel Gummidge is a British television fantasy series, produced by Southern Television for ITV, based on the Worzel Gummidge books by English author Barbara Euphan Todd.[1] The programme starred Jon Pertwee as the titular scarecrow and Una Stubbs as Aunt Sally. It ran for four series in the UK from 1979 to 1981.[2] On a countdown of the greatest British children's programmes, this series was number 50 in the 50 Greatest Kids TV Shows on Channel 5 on 8 November 2013. Channel 4 reprised the show in 1987 as Worzel Gummidge Down Under, which was set in New Zealand. 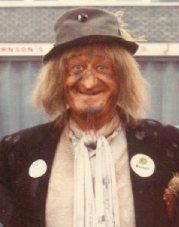 Jon Pertwee as Worzel Gummidge in 1982

In 1979, a television adaptation of Worzel Gummidge was produced by ITV station Southern Television for transmission on the ITV network. It was written by Keith Waterhouse and Willis Hall, and starred former Doctor Who actor Jon Pertwee as Worzel and Una Stubbs as Aunt Sally, a life-size fairground doll and Worzel's femme fatale.[3] This was a significant change from the original books, where Aunt Sally is Worzel's aunt, and Worzel is married to Earthy Mangold, a character who does not appear in the series. The Crowman, who made Worzel and some of his other scarecrow friends, is played by Geoffrey Bayldon, who had played the title role in Catweazle. Regular and occasional guest appearances were made by well-known TV actors of the time, including Barbara Windsor, Billy Connolly, Bill Maynard, Joan Sims, Lorraine Chase, Bernard Cribbins, Connie Booth, David Lodge and Mike Reid.

According to Jon Pertwee's memoirs, the idea for the series began as a proposed film about the Worzel Gummidge character by Waterhouse and Hall which would have been "about the scarecrow equivalent" of the Peasants' Revolt, with the scarecrows rising up against farmers who were going to burn them when the farming season had finished. Pertwee was approached to play the lead character by producer Gareth Wigan.[4] When this project was unable to secure the funds it needed for a distribution deal, Pertwee encouraged the writers to create a television pilot instead, and via his agent pitched the idea to Shaun Sutton, then Head of Drama at the BBC. Sutton turned down the project, which he felt was "too way out", as did Philip Jones at Thames Television. Pertwee later recalled that at this point he "began to lose faith in the project", but Southern Television's Lewis Rudd heard about it and enthusiastically agreed that his company would make the series.[4]

A total of four series with 30 episodes and an extended Christmas special were made between 1979 and 1981. When Southern lost its contract to broadcast on ITV, the new contract-holder, TVS, did not renew the show, despite a press campaign led by the Daily Star. Attempts were made to continue the series: for it to be produced independently by Southern for the BBC[5] and then for it to be produced in Ireland,[6] but these failed. HTV continued with their plans to produce the show in Ireland[7] but these fell through because of trade union problems,[8] as did attempts by the same company to make further episodes in England; the scripts that Waterhouse & Hall had written for the Irish episodes were, however, published in book form. Pertwee and Stubbs starred in the musical Worzel Gummidge in 1981 at the Birmingham Repertory Theatre which also starred Lucy Benjamin (then Lucy Jane Baker) as Sue. Jon Pertwee's final TV appearance as Worzel was in 1995, to celebrate 40 years of ITV.

The main locations for filming were the villages of Stockbridge, King's Somborne and Braishfield, along with Broughton for the fourth series, all of which are near Romsey in Hampshire. The Scatterbrook Farm scenes were filmed at Pucknall in Braishfield; Michelmersh was used for the scenes in the Scatterbrook barn.[10] Worzel's scarecrow stand was filmed near Fishpond's Farm between Braishfield and King's Somborne at OS grid location SU378274.

The programme remained in limbo until Channel 4, along with Television New Zealand commissioned Worzel Gummidge Down Under in 1986, which was shot on location in New Zealand; It ran for two series totaling 22 episodes. Only Pertwee and Stubbs remained from the original cast, with Bruce Phillips joining the cast as the Crowman (Geoffrey Bayldon declined to reprise the role) and Olivia Ihimaera-Smiler, daughter of prominent Māori author Witi Ihimaera joining as one of the children. The Lord of the Rings director Peter Jackson received an early credit for his work providing special effects for the series.

In the series, Worzel Gummidge was a scarecrow that could come to life. Living in Ten Acre Field, he would often visit the nearby village of Scatterbrook. He befriended two children, brother and sister John and Sue Peters, who often tried to clear up the messes he created. Worzel had a collection of interchangeable turnip, mangelwurzel, and swede heads; each suiting a particular occasion or allowing him to perform a certain task. He also had his own language, Worzelese.[1] Worzel's catchphrases were: "A cup o' tea an' a slice o' cake", "I'll be bum-swizzled" and "Bozzy MCoo". He was madly in love with Aunt Sally, a vain, cruel-hearted fairground coconut-shy doll[1] who considered herself a lady and far too good for a common scarecrow such as Worzel. Aunt Sally often exploits Worzel for her own ends (in one episode, she promises to marry him if he frees her from a junkshop washing machine, but she never has any intention of going through with it). The Crowman says there are good and bad Aunt Sallys (S04E05). The one Worzel likes has delusions of grandeur and is evil, in her constant nastiness to him.

The rationale for the move to New Zealand in Down Under was that Aunt Sally is purchased by a visiting museum curator from New Zealand, and Worzel follows her into the luggage chute.

Worzel and the other scarecrows sometimes spoke in their own "language", which was simply English spelled out letter-by-letter with "wor" appended to each. Words with three letters or less had "dip" appended, while longer words ended with "zel". Children who spoke Worzelese as a language game therefore gained practice with their spelling. However, Worzelese is far harder to speak than other play languages like Pig Latin and never really caught on.

A stage musical adaptation, titled Worzel Gummidge - The Musical, was created by the TV series creators Keith Waterhouse and Willis Hall with music by Denis King and featuring the original TV principal cast Jon Pertwee, Una Stubbs and Geoffrey Bayldon. The musical first premiered at the Birmingham Repertory Theatre for the 1980 Christmas season before receiving rave reviews and transferring to the Cambridge Theatre in London's West End from 22 December 1981 and extending to 27 February 1982. The Original London 1981 Cast Album was recorded at Abbey Road Studios; It featured 15 songs and 4 bonus tracks titled The Worzel Gummidge Christmas Maxi Single.[12][13]