In computing, the X Window System (commonly: X11, or X) is a network-transparent windowing system for bitmap displays. This article details the protocols and technical structure of X11. 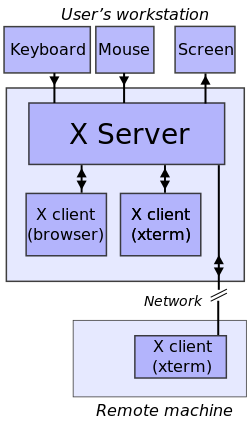 The communication protocol between server and client runs network-transparently: the client and server may run on the same machine or on different ones, possibly with different architectures and operating systems. A client and server can communicate securely over the Internet by tunneling the connection over an encrypted connection.[1]

Bob Scheifler and Jim Gettys set out the early principles of X as follows (as listed in Scheifler/Gettys 1996):

The first principle was modified during the design of X11 to: Do not add new functionality unless you know of some real application that will require it.

X has largely kept to these principles since. The X.Org Foundation develops the reference implementation with a view to extension and improvement of the implementation, whilst keeping it almost entirely compatible with the original 1987 protocol.

Communication between server and clients is done by exchanging packets over a network channel. The client establishes the connection, sending the first packet. The server answers by sending back a packet stating the acceptance or refusal of the connection, or with a request for a further authentication. If the connection is accepted, the acceptance packet contains data for the client to use in the subsequent interaction with the server.

After connection is established, the client and the server exchange four different types of packets over the channel:

The X server provides a set of basic services. The client programs realize more complex functionalities by interacting with the server. 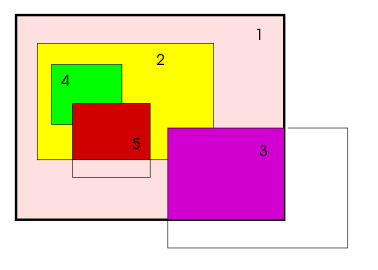 A possible placement of some windows: 1 is the root window, which covers the whole screen; 2 and 3 are top-level windows; 4 and 5 are subwindows of 2. The parts of window that are outside its parent are not visible.

What other graphical user interfaces usually call a window is a top-level window in the X Window System. The term window is also used for windows that lie within another window, that is, the subwindows of a parent window. Graphical elements such as buttons, menus, icons, etc. are all realized using windows.

A window can only be created as a subwindow of a parent window. This causes the windows to be arranged hierarchically in a tree. The X server automatically creates the root of the tree, called the root window. The top-level windows are exactly the direct subwindows of the root window. Visibly, the root window is as large as the screen, and lies behind all other windows.

The X server stores all data about windows, fonts, etc. The client knows identifiers of these objects – integers it can use as names for them when interacting with the server. For example, if a client wishes a window to be created, it requests the server to create one and (in case of success) gets in return an identifier the server associated with the newly created window. The identifier can be later used by the client to request, for example, a string to be drawn in the window.

Identifiers are unique to the server, not only to the client; for example, no two windows have the same identifier, even if created by two different clients. A client can access any object given its identifier, even if another client created the object.

Every window has a predefined set of attributes and a set of properties, all stored in the X server and accessible to the clients via appropriate requests. Attributes are data about the window, such as its size, position, background color, etc. Properties are pieces of data that are attached to a window. Unlike attributes, properties have no meaning at the level of the X Window core protocol. A client can store arbitrary data in a property of a window.

A property is characterized by a name, a type, and a value. Properties resemble variables in imperative programming languages, in that the application can create a new property with a given name and of a given type and store a value in it. Properties are associated to windows: two properties with the same name can exist on two different windows while having different types and values.

Properties are mostly used for inter-client communication. For example, the property named WM_NAME stores the name for the window; window managers typically read this property and display the name of the window at the top of it.

Events are packets sent by the server to the client to communicate that something has happened which may interest the client. A client can request the server to send an event to another client; this is used for communication between clients. For example, when a client requests the text that is currently selected, an event is sent to the client that is currently handling the window that holds the selection.

The content of a window may be "destroyed" in some conditions (for example, if the window is covered). Whenever an area of destroyed content is made visible, the server generates an Expose event to notify the client that a part of the window has to be drawn.

Other events can serve to notify clients of keyboard or mouse input, of the creation of new windows, etc.

The X11 protocol actually uses a single 32-bit unsigned integer - called a pixelvalue - for representing a single color in most graphic operations. When transferring the intensity of primary colors, a 16 bit integer is used for each color component. The following representations of colors exist; not all of them may be supported on a specific device.

Xlib and other client libraries

Most client programs communicate with the server via the Xlib client library. Beside Xlib, the XCB library operates more closely to X protocol. In particular, most clients use libraries such as Xaw, Motif, GTK+, or Qt which in turn use Xlib for interacting with the server. Qt switched from Xlib to XCB with the 5.0 release, but client programs were almost entirely unaffected by this change.

The X Window core protocol provides mechanisms for communication between clients: window properties and events, in particular the client-to-client message events. However, it does not specify any protocol for such interactions. Instead, a separate set of inter-client communication conventions governs these protocols.

The Inter-Client Communication Conventions Manual specifies the protocol for the exchange of data via selections and the interaction of applications with the window manager. Some have considered this specification difficult and confusing;[2][3] consistency of application look and feel and communication is typically addressed by programming to a given desktop environment.

The Inter-Client Exchange protocol (ICE) specifies a framework for building protocols for interaction between clients, so that programmers can build a specific protocol on top of it. In particular, the X Session Management protocol (XSMP) is a protocol based on ICE that governs the interaction between applications with the session manager, which is the program that takes care of storing the status of the desktop at the end of an interactive session and recovering it when another session with the same user is started again.

The freedesktop specifications include newer conventions, including the drag-and-drop convention Xdnd (used for transferring data by selecting it and dragging in another window) and the embedded application convention Xembed (which details how an application can run in a subwindow of another application).

The mechanisms of selections, cut buffers, and drag-and-drop in the X Window System allow a user to transfer data from one window to another. Selections and cut buffer are used (typically) when a user selects text or some other data in a window and pastes in a different window. Drag-and-drop is used when a user selects something in a window, then clicks on the selection and drags it into another window.

Since two different applications may handle the two windows, data transfer requires different clients connected with the same X server to interact. The X Window core protocol includes some types of requests and events that are specific to selection exchange, but the transfer is mainly done using the general client-to-client event sending and window properties, which are not specific to selection transfer.

Users can transfer data of different types between clients: it is usually text, but can also be a pixmap, a number, a list of objects, etc.

Selections and drag-and-drop are active mechanisms: after the user selects data in a window, the client handling the window must actively support a protocol for transferring that data to the application requesting it. Cut buffers, by contrast, provide a passive mechanism: when the user selects some text, its content is transferred to a cut buffer, where it remains even if the application handling the window terminates and the window is destroyed.

A window manager is a program that controls the general appearance of windows and other graphical elements of the graphical user interface. Differences in the look of X Window System in different installations stem mainly from the use of different window managers or from different configurations of the window manager.

The window manager takes care of deciding the position of windows, placing the decorative border around them, handling icons, handling mouse clicks outside windows (on the “background”), handling certain keystrokes, etc.

From the point of view of the X server, the window manager operates as a client just like any other client. The initial position and the decorative borders around windows are handled by the window manager using the following requests:

The window manager manages mouse clicks in the frame window. This allows, for example, a user to move or resize the window by clicking and dragging on the border or on the title bar.

Roughly, the state of a session is the “state of the desktop” at a given time: a set of windows with their current content. More precisely, it is the set of applications managing these windows and the information that allow these applications to restore the condition of their managed windows if required. A program known as the X session manager saves and restores the state of sessions.

Motif provides the base toolkit for the Common Desktop Environment (CDE), the desktop environment used on commercial Unix systems such as Solaris, AIX and HP-UX. (Solaris 10 includes both CDE and GNOME, with the latter the preferred desktop environment as of 2010[update].)

Scheifler and Gettys designed the X server to be simple but extensible. As such, much functionality now resides in extensions to the protocol.

At the protocol level, every extension can be assigned new request/event/error packet types. Extension features are accessed by client applications through extension libraries. Adding extensions to current X server implementations is reportedly difficult due to a lack of modularity in the server design.[4] It is a long-term goal of the XCB project to automate generating both the client and server sides of extensions from XML protocol descriptions.

The following table provides a partial catalog of extensions that have been developed, sorted roughly by recency of introduction: